Take inspiration from the work of Josef Koudelka (born 1938), the only Czech photographer within the renowned photo agency Magnum Photos. His life has been shaped by a need for unlimited freedom and independence, and a need to travel alone and discover the world through photography. Tapping into a strong sense of aesthetics, Koudelka has created pictures that are doubtlessly among the best of all time. How can his life and work enrich your own work? 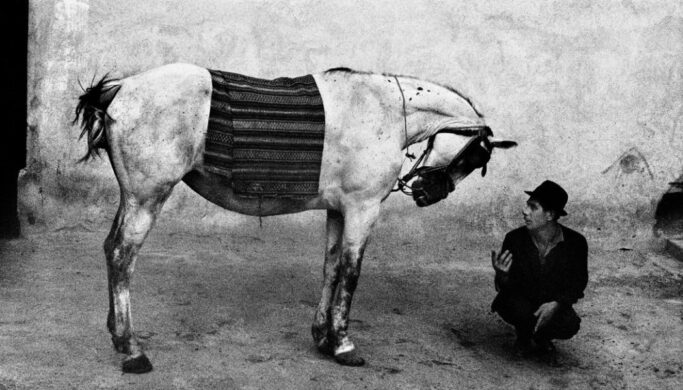 Preserve Your Freedom and Independence

Koudelka lived as a nomad for nearly forty-five years. A backpack on his back, and in it one replacement T-shirt, a sleeping bag, and the most precious thing of all—a camera. Every day he had to figure out where he would sleep and what he would eat. But whether that meant the great outdoors, a clay floor in a Roma family’s living room, or the apartment of photographer Henri-Cartier Bresson, it didn’t matter.

He definitely had some tough moments, even though he never speaks of them; we can read them between the lines of his Exile cycle. One way or the other, he was unconditionally free and financially independent and could focus unbounded on just the projects that fulfilled him. But don’t think he rejected his family. Despite his wandering way of life, his son and two daughters—and friends from around the world—sang Moravian folk songs with him on his eightieth birthday. 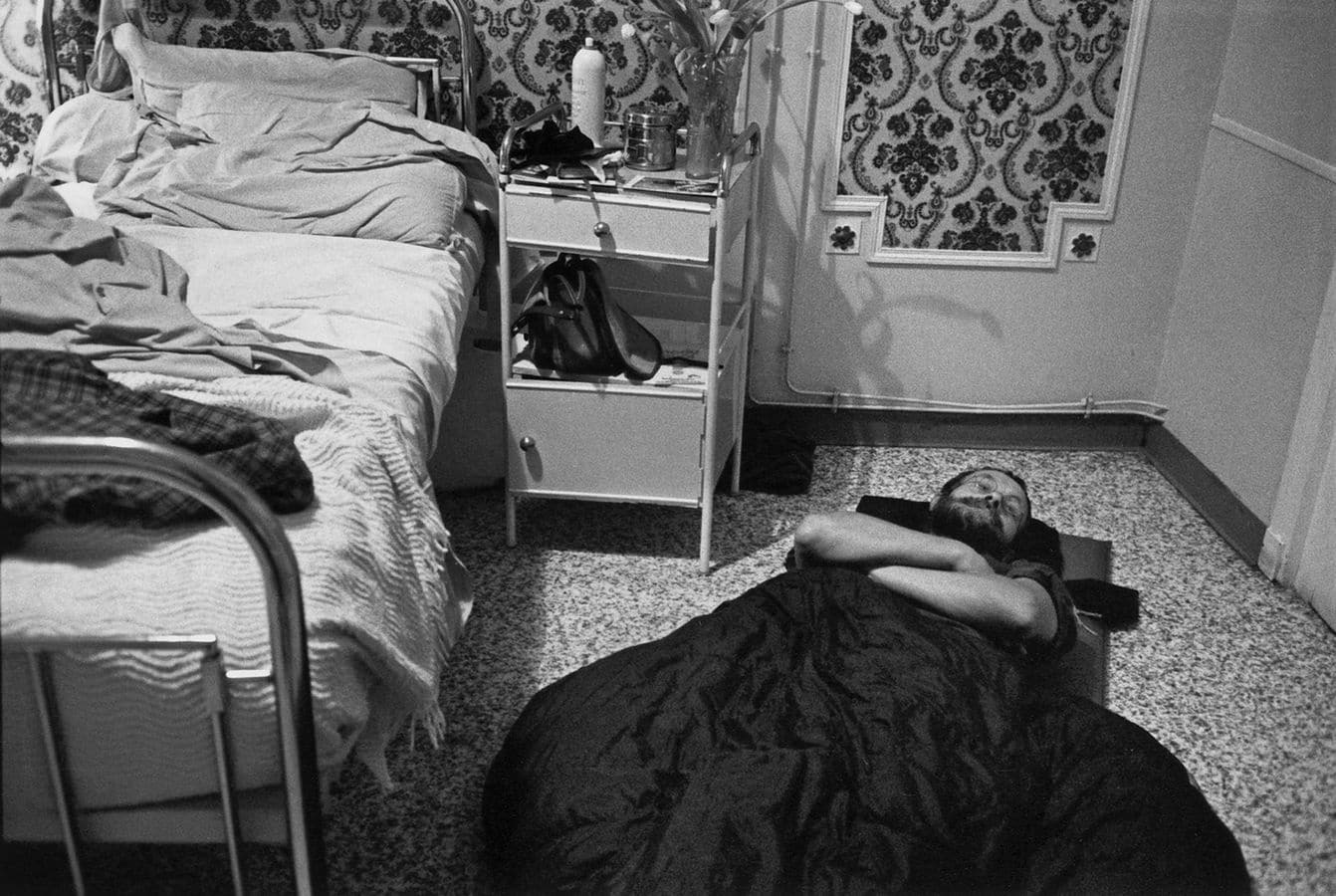 Use Every Opportunity to Develop Your Passion

You don’t have to jump straight in, become a full-time wanderer, and sell your home, car, and cat to devote yourself to photography. Even Josef Koudelka started out slow—at the age of 23, while still working as an aviation engineer, he began photographing performances at the Divadlo za branou theater, and during business trips to Slovakia, he took side trips to Roma camps while working on his Gypsies cycle. Even though he only began working full-time as a photographer at the age of thirty, by that point he had devoted so much time and energy to photography that he was sure it was worth a wanderer’s boots. 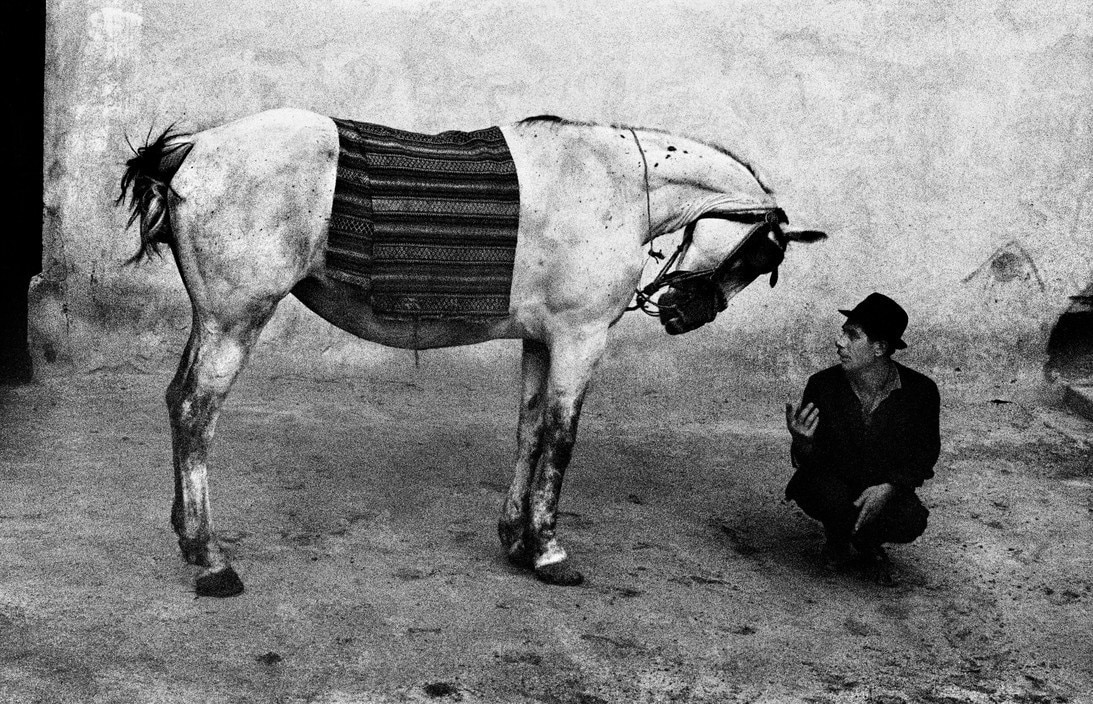 Become a Part of Your Subjects’ Lives

Why are Koudelka’s photos from his Gypsies cycle so packed with strong emotions? Why can we almost feel the closeness and even intimacy, as if we were directly witnessing his subjects’ daily lives? Koudelka was truly on the same wavelength as them. He didn’t come to the Roma camps empty-handed, but rather with a small, beat-up tape recorder from which he played gypsy and folk music—and recorded theirs. He found something they had in common, and expressed a sincere interest in their culture. 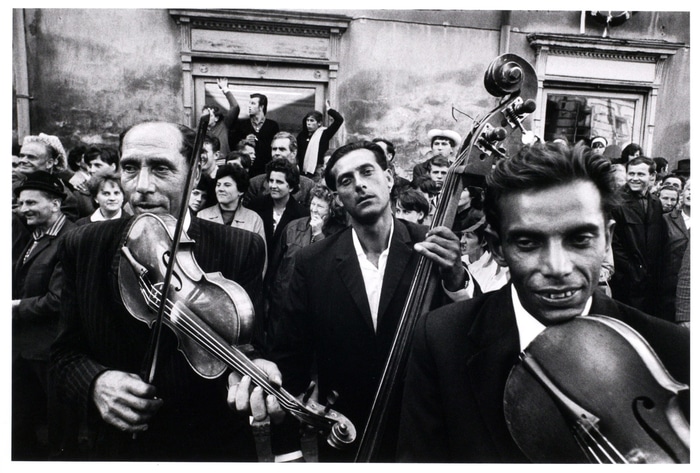 He also tried to approach them without prejudice from the very start, and during the days or weeks he spent on each visit over the course of eight years, he often slept in their homes, ate with them, spoke with them, photographed them, and then gave them his photos as well. He gained their respect. It was work on this cycle that taught him that a person doesn’t need much in life.

Experiment: Try Shooting With Different Lenses and Onto Different Formats

The second reason why we feel that we’re in the same room as the gypsies, laughing with them, dancing with them, and saying goodbye to their dead, is that Koudelka used a wide-angle lens. With a 25 mm angle, not even a spider in a corner can hide from the shot, which is ideal for cramped interiors. This angle will help you to capture both your subject and their surroundings, which adds context to a photo. 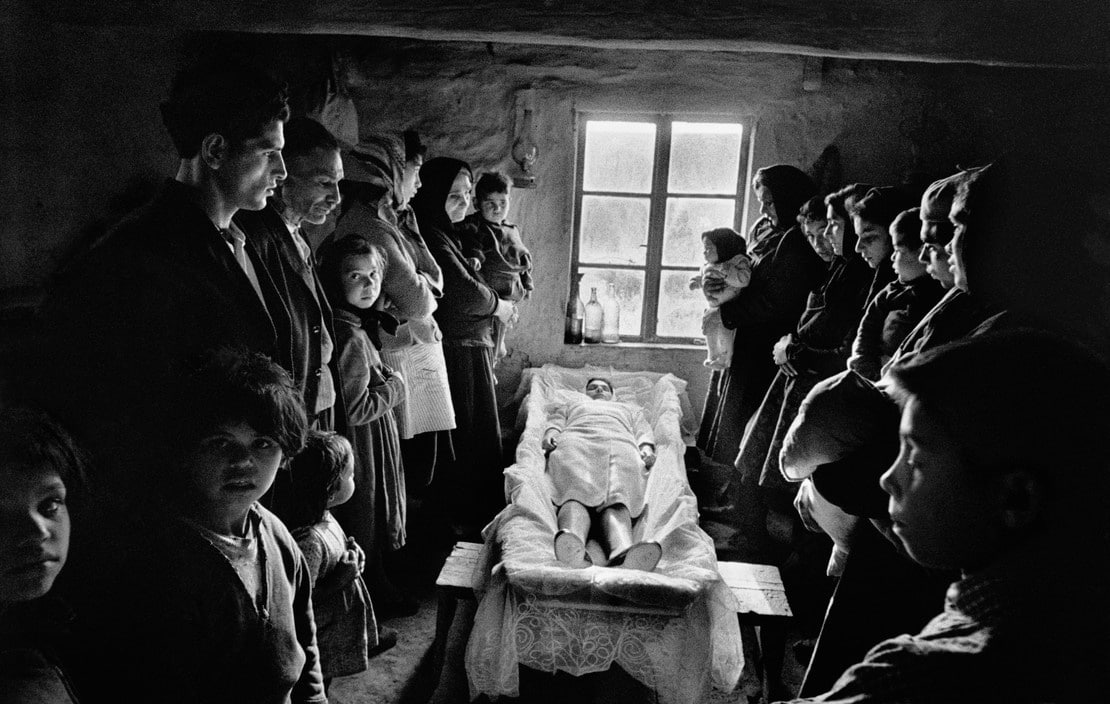 Josef Koudelka became a part of the local community, and thanks to this, he even arrived at situations as intimate as the final parting with the dead.

Every subject and every environment needs a certain lens type. When you’re photographing white-tailed eagles feeding their young, a wide-angle lens will hardly serve as more than a mug mat. But don’t be afraid to experiment with different lenses; they have an enormous influence on our visual perception. Koudelka knows this. Even though he likes to photograph scenery, he was never entirely satisfied here until he borrowed a panoramic camera, which let him show cultivated landscapes exactly how he wanted to.

And this led to his breathtaking environment-focused Chaos cycle, and his Black Triangle series with photos from the coal basin in the northwestern part of Czechoslovakia (and today’s Czech Republic). Using this format, he created cult-classic images of humanity’s devastation of the environment. The panoramic camera’s format provides these pictures with vastness and endless hopelessness.

“There are no good photos without good composition. I was originally an aviation engineer. How can airplanes fly? Through balance.”

It’s not easy to get Koudelka’s photos out of your head. It’s not just that he chooses attractive subjects; it’s also that he gives each photo harmony and balance through well-considered composition. Korean street photographer Eric Kim has pointed out the compositional rule of triangles at work in Koudelka’s Gypsies photos, through which Koudelka interconnects the photos’ subjects.

No matter whether it’s in a photo of boys making typical gestures to show off their muscles or one of a man looking down proudly, where our gaze follows the triangle from his face to the faces in the picture and on the coin. The triangle ensures you don’t miss anything important and your attention is right where it should be. 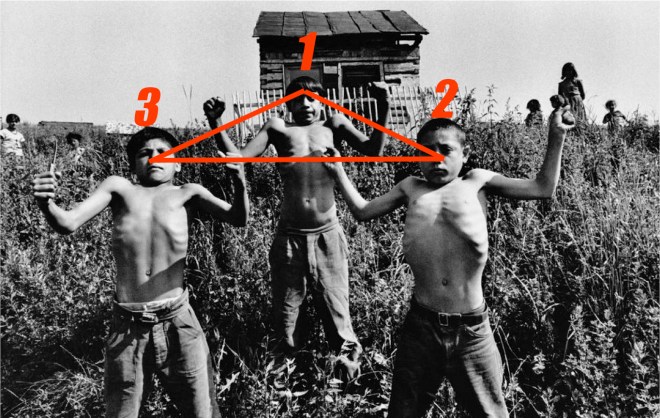 Picture no. 1: The triangle composition gives this photo harmony and balance.

Photograph What You Really Care About

Forget about prying questions like “and why is it black-and-white?”, stop worrying about others’ expectations, and, for at least a while, take pictures just for yourself. Josef Koudelka chose his topics primarily himself, and he kept up actively taking pictures with excitement and curiosity all the way to the age of eighty.

When theater director Otomar Krejča asked Koudelka to photograph a performance, he received more than just austere documentation in return. Most of all, Koudelka took an interest in the moment when the actors gave themselves up fully to their roles, fractions of seconds in their facial expressions that revealed everything about their characters’ natures. He underscored their gestures and emotions by applying extreme contrast, grain, and cropping during post-production.

Even though Krejča only expected a mere record of the performance, Koudelka’s photos would go on to tell of the very essence of the theater and set the visual form of Divadlo za branou throughout the 1960s. 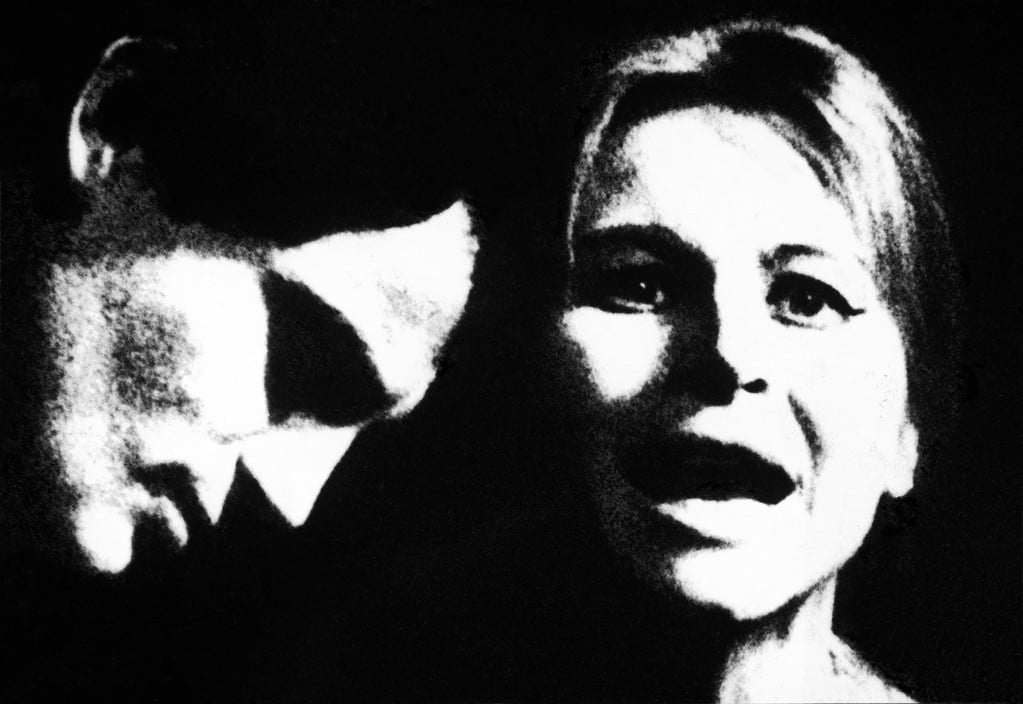 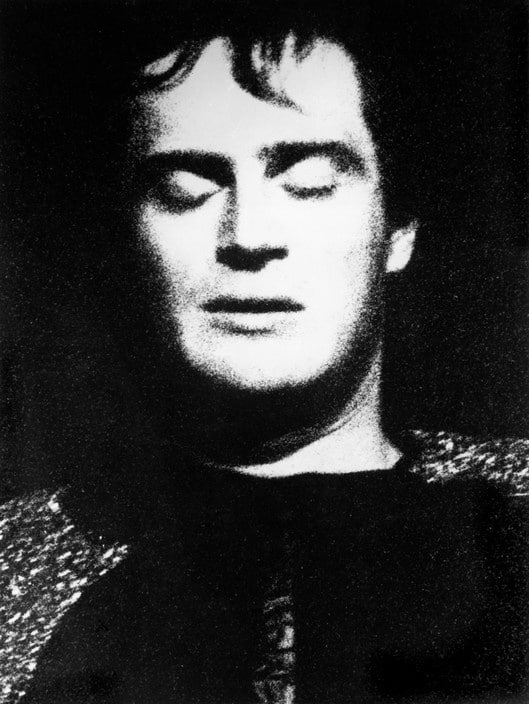 And in Closing: Take Pictures, Train Your Eyes, and Pick and Choose

After every theater rehearsal, Koudelka developed his photos and assessed what he could do better. And he himself was always developing too. He practically never set his camera aside. For example during the occupation of Czechoslovakia by the Warsaw Pact armies in 1968, he used up roughly 261 rolls of film with 36 frames each, amounting to around 10,000 photos.

He has never looked back over his photos from the last thirty years that he took outside of his exhibited projects. Instead of crouching over a computer or holing up inside a darkroom, he preferred to devote all of his strength to photography, and has only been getting around to choosing and editing in the last few years.

Koudelka’s photos are powerful in part because of their ambiguity. Everyone interprets them based on their own feelings—and Koudelka himself does not like to talk about his photos. Here larger-than-life fingers grab our full attention, as if they were trying to escape the flow of time and hold fast tooth-and-nail within our subconscious. They remind us of the fragility and mortality of civilization.

Koudelka does not surround himself with his photos; he tries to look at each one as a printed piece of paper with no emotional bonds, so that he can choose the truly good and time-proven ones. If he manages one to three good photos a year, he’s satisfied, although quite a few fans would say he’s too hard on himself.

It’s like with sports—practice makes perfect. You can read hundreds of articles on how to take pictures, you can study thousands of photos from professional photographers and take inspiration from their work, but until you lay your eyes to the viewfinder and press the trigger, you won’t become a better photographer.

One last tip: get out there and take pictures!