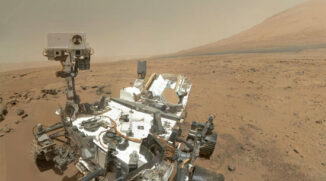 Curiosity—a robotic vehicle—landed on the surface of Mars at the beginning of last August. That means it won’t be long until the first anniversary of its arrival on the red planet. Since it landed, it’s been collecting a variety of data, including pictures. Let’s take a look at some of Curiosity’s first pictures from Mars….