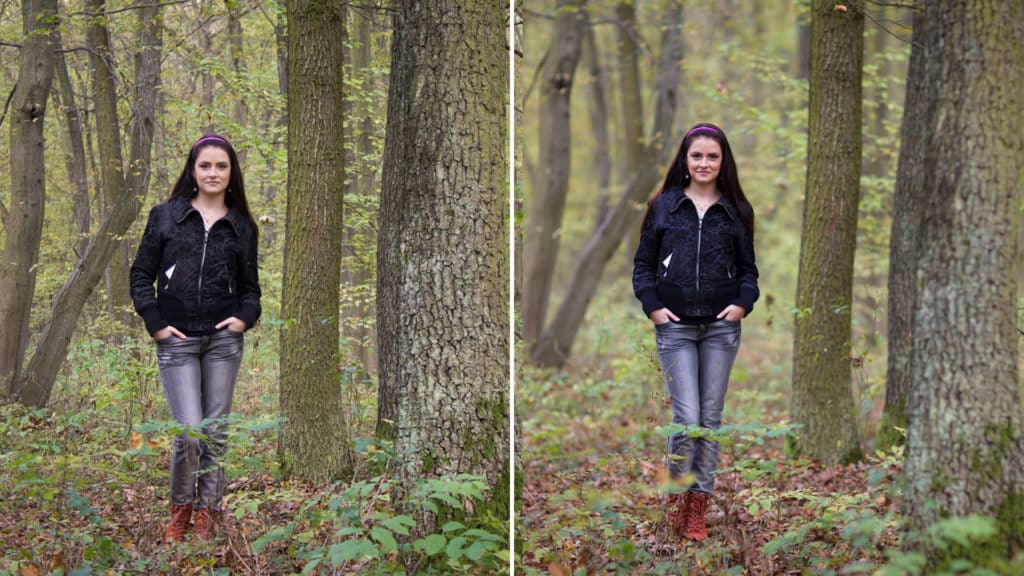 They’re heavy and they have no zoom, but because of their image quality, some professionals use only these lenses. Why are ultra-fast lenses so highly valued?

Most photographers start with a camera fitted with a cheap universal lens. If they own a body that supports exchangeable lenses, they eventually start looking at other lenses and asking if they bring any extra benefits.

These basic lenses all share slow lens speeds—in other words, high lowest-available F-numbers. The designations above already tell a lot: they mean a weak F3.5 minimum for the wide end and F5.6 for the long end. But what’s wrong with a slow lens, anyway?

The first problem is of course that these lenses don’t let much light through to the sensor. In dark conditions it has to fight this by raising ISO, which causes a significant increase in noise. In these conditions you’ll have a dark viewfinder as well, and also the focusing sensors can end up confused.

Another “problem” (or trait, at least) of slow lenses is large depth of focus. Even if you focus on the main subject perfectly, the background is only halfway blurred, and so it can still be distracting. Sometimes this lack of blurring is an advantage, for example in landscape photography. But for portraits, for example, you want to suppress the background and let the person shine through.

Depth of Field in Detail

Depth of field depends on not just the aperture you use, but also to a large degree on your sensor size. The larger the sensor, the smaller the depth of field at the same aperture. “Full-frame” sensors (also called FF or 35mm format sensors), which have the same size as a classical film frame, do very well here—they readily optically separate the photographed object from the background, which they leave highly blurred. Meanwhile the tiny sensors in phones have an enormous depth of field, making it very difficult to blur a background.

What’s So Great About Small Depth of Field?

For e.g. portraits, small depth of field is useful for “pinning” the subject and suppressing (blurring) the background. Similarly, if you’re photographing people or details against a complex indoor scene with lots of different elements in the background, minimizing the depth of field helps you to practically eliminate these distractions.

In landscape photography on the other hand you generally want practically everything to be in focus, so you want the largest depth of field available.

In order to compare the various systems, we need to take into account their “crop factor,” that is, how much smaller than full frame their sensor is. For the Canon and Nikon APS-C sensors, that comes out to 1.6 and 1.5. Micro Four Thirds has a smaller chip with a crop factor of 2. For the rest of this article, I’ll be including the crop factor for 35 mm format (FF) alongside the numbers I give.

For conversion purposes I used the excellent calculator located here.

A side note: Small depths of focus can also be achieved via high zoom. For example with a 200 mm focus on any sensor, you can practically count on significant background blurring… although this is at the price of a major change of perspective, and so it’s not a universal solution.

There are two roads to small depth of field:

You can for example fully replace your basic zoom lens with e.g. a Canon APS-C lens that’s 17-55/2.8 (FF equivalent: 27-88/4.5), or a Micro Four Thirds lens that’s 14-40/2.8 (FF: 28-80/5.7). Unfortunately they’re both several times more expensive the basic lens mentioned above, and also, even though their depth of field is significantly reduced, it’s still more than you might want.

Lenses with minimum F-numbers of F2.0 or lower are very popular among photographers. Of course, this is usually something-for-something, costing you the option of zoom—these are very often (although not always) “fixed” lenses with just one focal length.

For both Canon and Nikon, this is the beloved 50/1.8 lens (usable even on FF! On an APS-C, it creates an image like an 80/2.9 lens would on an FF). This lens is very cheap while still giving good image quality. Although it can’t fully replace the basic lens, it’s a great accessory for portraiture and similar photography.

The smaller the depth of focus, the larger the demands on precision equipment and precision work.

Before you use a lens the first time, you need to make sure that it focuses properly with your camera. Tests in real-world conditions can actually be misleading, so if anything seems off to you, we recommend printing and trying a testing pattern (e.g. the one here you’ll find one with a very detailed description).

Minor imprecisions in focus can be fine-tuned away in some cameras’ menus (“Autofocus Microadjustment”). For bigger problems, you’ll need to go to a shop.

But equipment is just the first hurdle. It’s also important to adapt your technique.

You have to be much more careful when focusing, and pay attention to, for example, any tree branches around a model’s head. The focusing system might give preference to those over the actual model, and what’s more, this kind of problem isn’t visible in a tiny viewfinder, but rather, only after the full photo is created.

In some situations you can also run into trouble with applying the popular “focus-recompose” technique, where you focus with the center focus point and then rotate the camera to fine-tune composition and get the subject onto a golden ratio point. For wide scenes with very small depth of field, this motion can sometimes take the subject out of focus.

These all are reasons why it’s important to get used to more frequently checking pictures right after they’re taken.

Taking pictures with a small depth of focus can also impress outdoors on a sunny day. But with a small F-number, you are forced to use very short times, and some cameras do not allow these. That mainly applies for the cheaper DSLRs. The current Canon 700D has a limit of 1/4000 seconds, and its lowest ISO is 100. For a lens with a speed of F1.4, this setting will not work under sharp sunlight, and to avoid major blowout, you will need to raise the F-number to F2 or even higher. The alternative is to use an ND filter or polarizing filter.

To produce an ultra-fast lens, manufacturers have to make compromises. This leads to two minor design problems typical for most of these products: vignetting, and “bokeh fringing.”

Vignetting, i.e. darkening of a picture’s corners, is most prevalent at the lowest F-number, and disappears with higher numbers. In some cases vignetting is unwelcome, but in others it can be welcome, because it emphasizes the subject in the middle and suppresses potentially distracting elements at the edges.

Bokeh fringing, or more technically longitudinal chromatic aberration, turns objects’ edges (fringes) purple when they’re in front of the area in focus, and turns edges green beyond the area in focus. The cause is differing light refraction for different wavelengths. This effect is visible on high-contrast contours, mainly between white and a dark color. This too disappears as F-numbers rise.

Some lenses have a very specific problem where the focus shifts right when the aperture rises, usually when focusing to a short distance. Here the problem is in the lens’s construction, and thus cannot be solved. Because of that you have to think over how much you care about this. For an interactive example, see the last picture on the page here.

If we ignore the cameras that are mid-format and larger, the smallest depths of field available are offered by full-frame cameras with corresponding lenses. Even in the analog days, the “fixed 50” lens was popular (in part because zooms are hard to manufacture and therefore were introduced later); for example, the French photojournalist Henri Cartier-Bresson most often used a Zeiss Sonar 50/1.5. This focal length is still popular, along with lengths around 30 or 35 mm, and so you’ll often see them on for example the cameras used by wedding photographers.

The preference out there for fast lenses is also visible in other articles here on Zonerama Magazine: Majo Elias generally uses a Nikon D800 and a Sigma 35/1.4 Art lens, while my favorite combination is the Canon 5D Mark III and a Sigma 50/1.4 Art (all full frame).

Your Options Are Expanding

Recently Sigma introduced an unusual lens that runs 18-35/1.8 and is made for APS-C sensors (FF roughly 27-52/2.7). This means that the smaller sensors now have access to a very fast zoom lens, even though it’s still only on the way to the typical full frame 24-70/2.8. Unfortunately fast zooms are heavy and expensive, but thanks to them, there is a flood of nice fixed lenses. If you haven’t done so yet, try checking out the ones available for your camera. You may be in for a pleasant surprise!