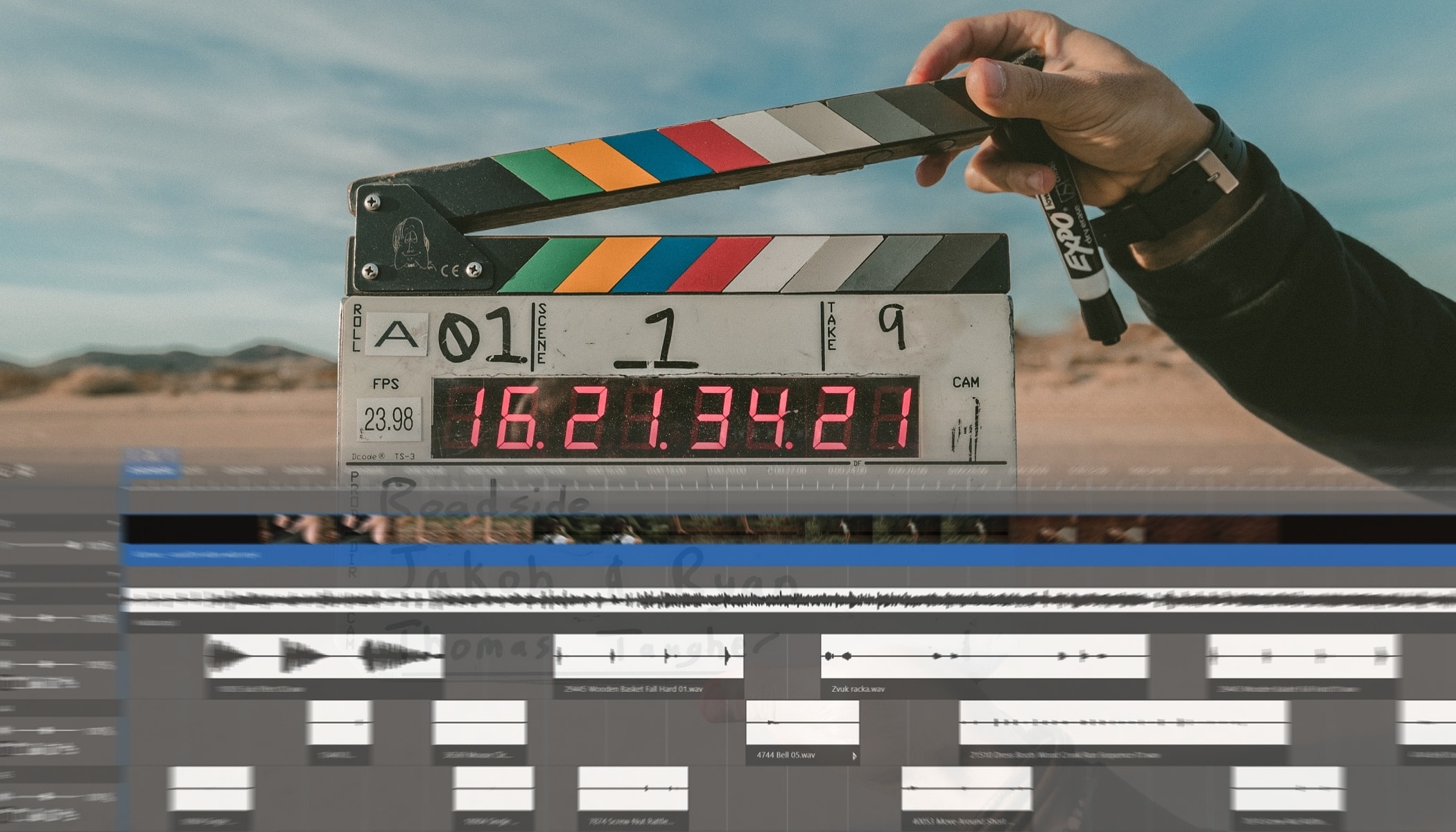 Sound is an essential component of any video. Since the first sound film, we’ve come a long way as far as options for incorporating sound into video, also known as sound design. Sound design can be done quickly and easily in Zoner Photo Studio X. Read our tips for finding the right sounds and using audio to boost your videos.

Sound design includes all the audio that is added to a video. The right soundtrack can create the perfect atmosphere to help you guide the viewer in the way you want. Imagine video footage of a forest landscape – the viewer only sees the forest, but after the sounds of birds singing and other wildlife is added, you give the viewer the feeling that they are witnessing a forest brimming with wildlife.

The beauty lies in the fact that the forest may only have a few insects in the actual video. This is where sound design comes in. It’s no wonder that many say the editing room is where a large part of the story comes to life. And it is sound in particular that plays an important role in shaping this story.

In the link below is a video without any original sound. All sounds, including the birds singing and the sound of running through the forest, were added in post-production in Zoner Photo Studio X. Without these sounds, the video wouldn’t be the same.

Record sounds or add them during editing?

Sound design isn’t just about adding sounds for things that aren’t visible in the scene. We often add the sound of something the viewer sees in the scene. You might ask, why add the sound when I could have just recorded it at the time of shooting? This is because there are situations where it’s difficult to record the sound exactly as it happened in the scene. It’s often easier to just add it in post-production.

For example, a basketball player shooting the ball through the hoop. You have two options. Either you can record the sound of the ball swishing through the net in a complicated way by inconspicuously placing the microphone somewhere near the basketball hoop so that it isn’t visible in the shot. Or, the second option is to simply add the sound later during post-production.

What about fake sounds?

Another situation could be that the sound you add is not heard at all while recording, but it still has some level of justification in the scene. For example, a Jedi Knight waving his lightsaber. I’m sure many of you are familiar with the unique vibrating sound that we have come to associate with lightsabers. Of course, this sound wasn’t added until post-production. As you can see, sound design can also serve as a tool to evoke a certain atmosphere or to enhance the viewing experience.

For the next example, I’ve added a sound for the movement of the sliders in Zoner Photo Studio X in post-production. This is a video created using motion graphics. In this case, working with added sounds is a must if the video is to have the right effect.

The question is how do you work with these types of sounds in Zoner Photo Studio X. If you are already somewhat familiar with video editing and how it looks, you already know that there’s a timeline, with tracks for video files and other tracks for audio files. The track for audio files is marked with the letter A. Simply drag and drop the desired audio file from the folder to the place you need it in the video. Move the audio track along the timeline by moving the mouse. 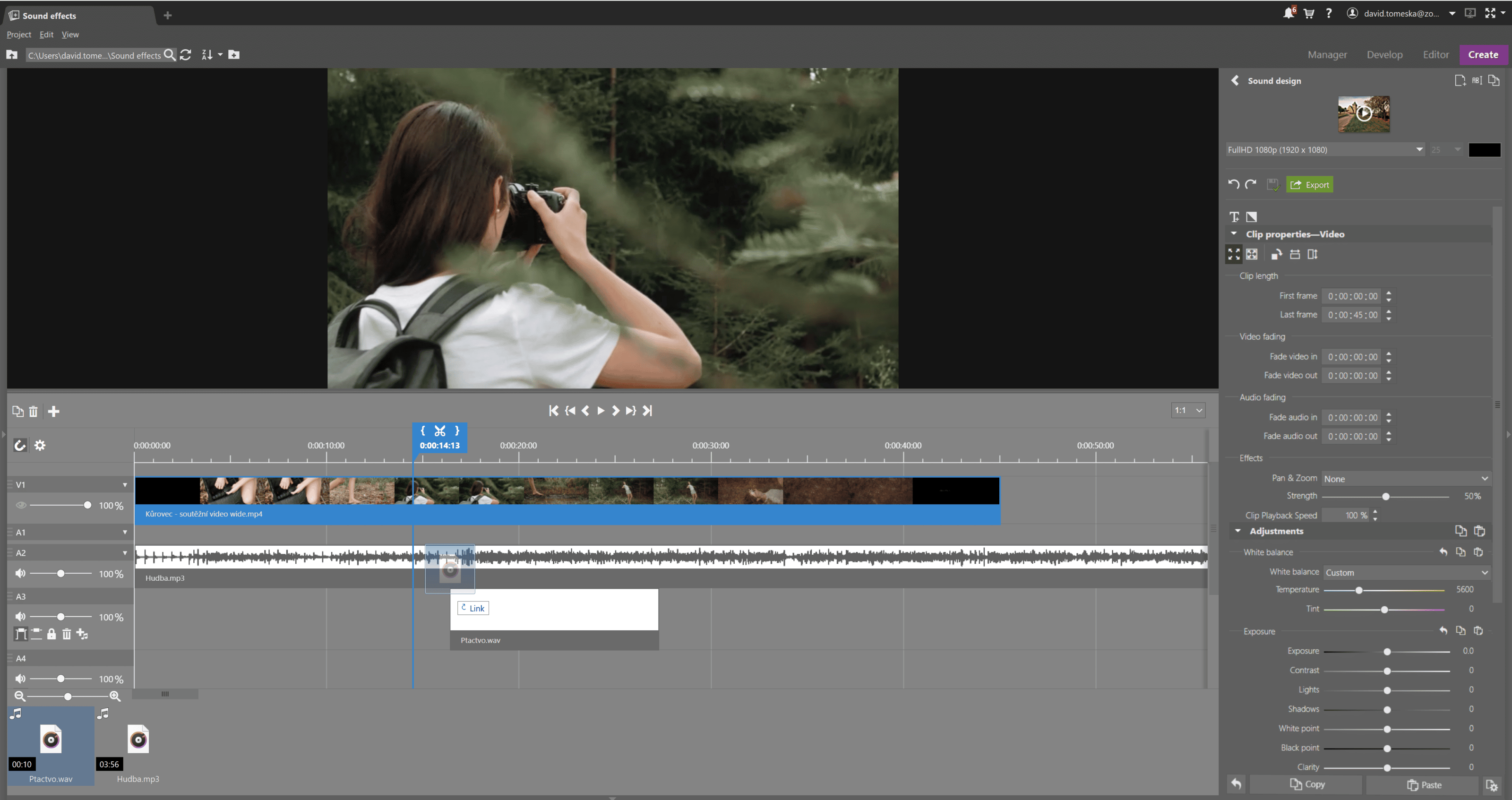 The advantage of editing your video in Zoner Photo Studio X is that you can make multiple sound or image layers. This may come in handy when you want to use more than one sound at a time. For example, the sound of birds in the forest and a conversation going on at the same time, with background music, etc. To add more audio tracks, click the gear icon and select Add audio track.

Those of you who have never worked with sound before are probably wondering how to find different types of sounds. There are basically two options available to you. The first involves recording the sound yourself. If it’s the clinking of glasses, a knock on the door, and other simple sounds, this shouldn’t be a problem. All you’ll need is a device to record the sound (camera, dictaphone, or something similar) and a bit of imagination and creativity.

Then again, you may be searching for more complicated sounds. For example, it’s hard to make the sound of a war submarine on your own because you probably don‘t have a working submarine at home. Fortunately, online audio libraries are a huge timesaver that have been created in recent years. They offer thousands of premade sounds.

There are a number of these specialized audio libraries. Some of the free sites are Zapsplat or even YouTube has an audio library where you can find countless sounds in addition to music. You can find almost anything on these sites, from basic sounds of daily life to more complicated sounds like a Jedi lightsaber.

Give your videos a voice

[Infographic] How to Replace a Photo’s Sky

Discover a New Medium Format World: Moving to a Bigger Chip with the Fujifilm GFX50s