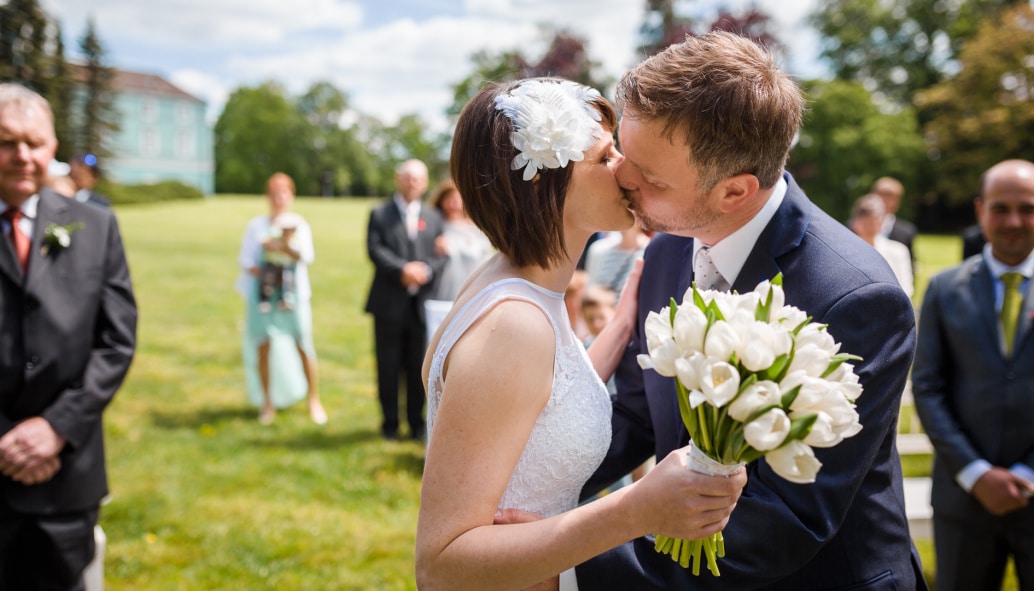 They say that wedding photography is among the hardest genres. Beginners are especially worried about their shots of the first kiss, because this moment flashes by so quickly, and also because it’s unrepeatable. Luckily the situation isn’t as complicated as it might at first sight seem, even though there’s a lot that can happen.

I’ve got a lot of weddings behind me, and yet I have to say that I’ve gotten pretty anxious sometimes. I think I can assume that some of these problems happen to every photographer, especially when they’re starting out and don’t yet know what all to look out for and what exactly to expect when.

I’ve served as the main photographerat over100 weddings by now. Naturally they’re lower in number and quality than the outputs of renowned wedding photographers, but I think my experience qualifies me to compare different weddings and see the differences among them all the same, so let’s take a look at catching that first kiss.

Not Just One Try

This point is fundamental. Sometimes when a kiss is too short, the wedding official asks the pair themselves to kiss again. They’ll generally say something like “one more time for the photographers” during this and smile, so that the situation doesn’t feel embarrassing and just brings laughs from the onlookers instead.

This call to repeat the kiss is more likely the shorter the kiss was and the more photographers or friends tried to capture it.

If you’re ready for the first kiss, you’ll generally catch it even when it’s short, but a repeat kiss is a welcome way to choose a different composition or capture different emotions. Smiling wedding-goers in the background are ideal, and nobody will be able to tell from the photo that they’re smiling at the priest’s “one more time,” and not at the newlyweds.

Don’t Be Afraid to Intervene

I try to be as hard as possible to go unnoticed at a wedding and not to get involved in ongoing events. But I’ve also had moments where the first kiss was very fast, and I wasn’t sure if that one shot that I’d taken was taken in time. The official didn’t say anything, and so I went up and asked the newlyweds myself to kiss once more. It worked out, and I had multiple shots to choose from once again.

Sometimes things happen faster than you’re used to. By the time I was photographing the twentieth wedding of my career, I had an idea of how everything works. But it only takes little hitch to miss that kiss.

The wedding I’m thinking of right now is one where all went as planned until the moment when the couple exchanged rings… didn’t wait for anything… and went right ahead and kissed. Today I know that this sometimes happens, but back then I happened to be looking at the display at that moment to check if everything had been set up right for my previous pictures.

With my head leaned down towards my camera, I heard the light laughter of the wedding-goers. Right away I realized that I probably had a problem.

When I looked up, the newlyweds were looking innocent—everything had happened so quickly that I’d completely missed the kiss. Fortunately the official spoke up, and thanks to him the pair had another kiss, which I caught without problems. The official looked at me and said, “One more time?” By that moment I was back in a good mood, so I replied, “Sure.” So everybody laughed and the newlyweds had a third kiss. The photo that came from that third attempt with the cheerful crowd in the background felt romantic and very optimistic.

I’ve been doing more and more weddings lately for couples where one partner is a native (Czech) and one is a foreigner. This often brings small differences to the ceremonies. An interpreter has to be present, and meanwhile the foreign half of the couple may not precisely know the local customs.

Here the ceremony was in a beautiful chapel in a breathtaking countryside castle town, Valtice, with a Czech bride and an American groom. The interpreter translated the priest’s questions to the couple, and they said their vows. But the couple waited for nothing and kissed immediately. That surprised me a bit, because they hadn’t exchanged rings yet! All the same, I managed to take a good picture, even if from a poor angle.

Yet it turned out that the priest was even more surprised, as he then said: “And confirm your marriage by signing this book…” At that moment the interpreter and I looked at each other, confused, and I discreetly signaled to the priest that he’d skipped the rings, which were lying just by him. Not hesitating for a moment, he added “…but before that, you will put on your wedding rings.”

After the rings, everything continued as normal. The couple was called to take their first kiss as newlyweds, and so the remaining shots are from entirely different angles.

One time I ended up confirming that too many good photos can be too much. During the exchanging of the rings, the bride and groom generally look at each other, smile, sometimes struggle with putting them on, and make all sorts of faces in the process. In short, you can take a lot of great pictures full of emotions very quickly.

One of my weddings was especially great in this phase, with each photo better than the last. Until the kiss. I pressed the trigger and… nothing happened! Naturally I got nervous and kept trying my luck. As it turned out, I hadn’t run out of space on the card (I always keep an eye on that); instead I’d been snapping so fast that the camera hadn’t managed to save the pictures yet, and they’d filled up the camera’s buffer. Luckily after a few endless seconds the buffer began to empty again, and I could get back to taking pictures, so I caught the kiss. But I was in a sweat.

While it’s good to be respectful during wedding photography and to act responsibly, you don’t need to be afraid. Mistakes can be fixed.

But you do need to know your camera. Not just which button does what, but also things like how it actually focuses, so you’re not surprised when you suddenly just can’t get it to focus on the groom’s black suit. Quickly shot but blurry pictures of the kiss are useless too.

As for your knowledge of your camera, it’s ideal to take some rapid shots before the ceremony, to see if you don’t run into buffer problems like I did. If you run into them frustratingly fast, then consider a higher-class camera (don’t we all…) or a faster memory card.

I recommend taking multiple pictures during the kiss. If it’s going to last several seconds, you even have time for multiple compositions. Meanwhile it’s not ideal to rely on everything getting focused right on your very first shot, so before my later trigger-presses, I focus again and again (I have focusing on a different button than the trigger). Consider trying that too.

As I illustrated above, it’s also not ideal to check the camera’s display too much. And after the exchanging of the rings, there’s no point anyway, because that moment won’t be repeated. Despite that, it’s good to check your pictures once there’s time. That can prevent problems with over- or underexposed pictures. This advice is mainly for users of DSLRs. For mirrorless users, this problem mostly disappears, because the pre-shot preview already shows you exactly how your exposure will turn out. But DSLR users on the other hand have the advantage that an unusually long mirror snap can alert them to an exposure that’s too long and might give blurry pictures.

A human approach is important, and so it’s to your advantage to talk to the priest or clerk for a while before the ceremony starts. For one thing, this lets you know the places where you’ll be allowed to move around. For another, it lets you know how strict the official is. And they’ll see, meanwhile, that you’re all right, and then they’ll help you out.

But sometimes they can forget, so if worse comes to worst, if you really don’t catch the kiss, it’s better to let them know and to provoke the newlyweds to take a new kiss rather than regretting your lack of a picture later on. After all, they’ll regret it too.

What I’ve covered above certainly isn’t everything, and so if you too have had or witnessed some memorable experiences here, please let me know in the comments!