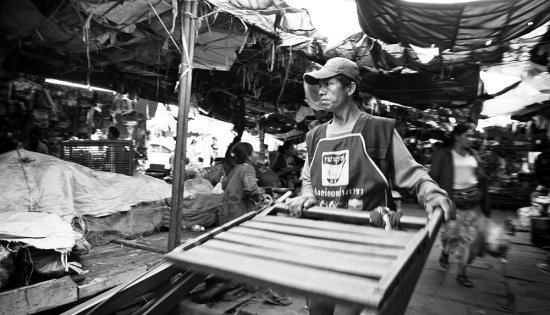 Meanwhile, if I had to suggest just one way to improve your pictures, it would be: take pictures. You can have the best equipment, you can memorize dozens of books about better composition and exposure, but in the end, you still have to head out and take pictures. Only experience will make you a better photographer. And getting that experience tends to be hardest for those who long to someday call themselves photojournalists.

Note: I won’t be mentioning demonstrations and other major challenges in this article, since frankly, only an idiot would take on those challenges without prior experience.

Today’s topic—street photography—shares with documentary and journalistic photography four obstacles that don’t exist for other disciplines. Their names are Shame, Nervosity, Insecurity, and Fear.

Now, are you ever ashamed to photograph a bug or a mountain? I doubt it. But when taking pictures on the street, you’ll be directly confronted with other people. And yes, they may not agree with being photographed by you. And while you’re busy fighting your own sense of shame, the whole scene is also disappearing right in front of your eyes—right in front of your lens!

I’ve got a secret for you: not once in all my work has anyone attacked me for a picture. At worst they’ve told me (often with a smile) that they didn’t want to be photographed, and then I’ve respected that. Well, I did once get a torrent of angry shouts from a fisherman who didn’t want to be photographed. That was the absolute worst. And then even though my picture of him was one of the best I took that day, I never published it. And that was the end of the matter.

1) Ask for Permission
Don’t be afraid to make contact with the person being photographed before taking the shot. Slide into conversation and after a while, ask for permission to take a photograph. But don’t be afraid to also just directly go and ask if you can photograph the person. Tell them what interested you about them (clothing, an outlandish hat, or anything at all). Remember, when you praise something about somebody and show real interest, you’ll gain their sympathies quickly.

2) Be Unobtrusive
Small cameras don’t draw as much public attention as bulky DSLRs. A photographer with a small compact or mirrorless camera doesn’t immediately give off the aura of a professional, and the people being photographed will worry less about where the photo will be used.

3) Pretend You’re Photographing Something Else
One trick is to seem to have focused on a different object in view. Just start looking at something other than the person photographed as soon as you’ve pressed the trigger and moved the eyecup away from your eye. Most people won’t notice that you’ve just taken a picture of them.

4) Fire from the Hip
Taking pictures from anywhere near the hip goes against every rule on photographic composition. But on the other hand, it makes you very hard to notice. Just keep your camera slung over your shoulder or at your hip, and press the trigger without anyone noticing. Just remember that this technique requires a lot of practice in the field to get a feel for the composition and exposure times needed. That’s because this trick can easily leave your pictures suffering from heavy motion blur.

6) Stick to Busy Places
When there are dozens, hundreds, or even thousands of people around you, what’s one photographer more or less? Concerts, markets, sporting events, other events—they all work in your favor. Leave lonelier places for the future, when you’ll be more experienced and more self-assured.

7) Be Prepared
Technically, physically, and mentally. Think ahead, get the rules of composition under your skin, become one with your equipment. Do it before you go; there won’t be time after.

8) Use a Wide-angle Lens
Wide-angle lenses force you to be close to what you’re photographing, which can sometimes be difficult due to physical or legal obstacles. But pictures taken with short focal lengths draw the viewer straight into the action. And that’s also the whole point of photojournalism.

Landscape Photography at Every Hour—Part I: Landscapes in the Morning, Evening, and Night

The Magical World of Glaze Ice

How to Photograph Landscapes III: Tips for How to Work With Your Camera