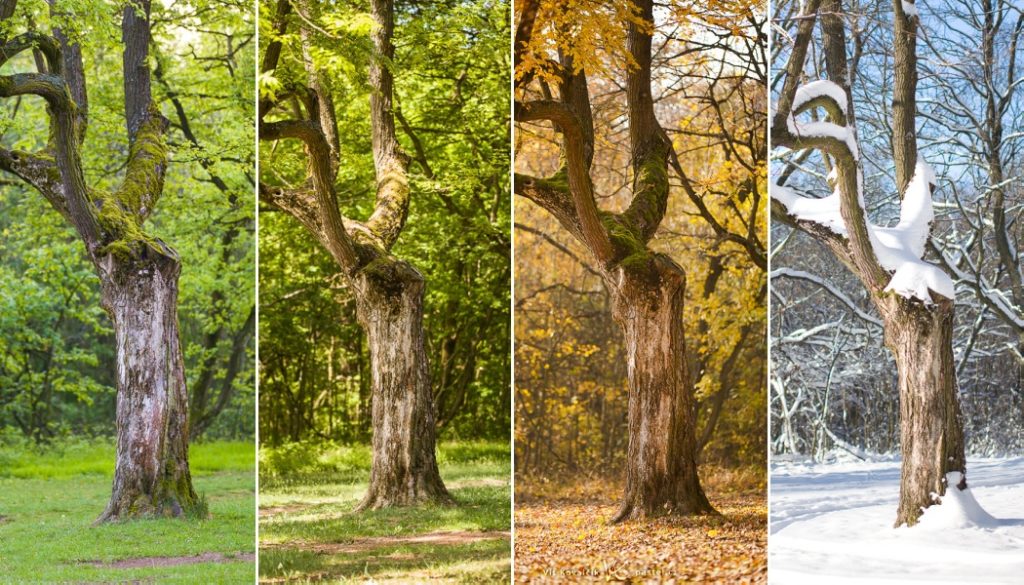 Spring is here—and it’s waking up nature. But every other season is fantastic too. Especially for photographers. So keep returning to the same photogenic places year-round. That will give you a unique collection of photos that, even though they all show the same subject, never quite show the same picture.

I have a favorite place in the woods that I visit whenever the weather’s interesting—or I’m simply walking nearby and have my camera on me.

I’ve found a spot from which I always photograph the very same tree. I don’t go there regularly, but the first picture is from all the way back in 2009, and so over the years since then, there’s been enough time for some interesting pictures that beautifully illustrate the different faces of nature.

In this article I’ll show you what sort of photo collections you can get over the years with this technique:

The arrival of spring is joyful, and the warm summer sunshine makes photos lively.

Blooming flowers are where you’re really going to see a bouquet of colors at this time of year. There are yellow flowers on the ground that I could have photographed, but I wanted to maintain my usual perspective for this photo series, and so I didn’t do so. (The kind of picture I have in mind is one where I walk up to them and include them in the shot from up close.)

Even when you can’t see sun rays, every spring photo gives off a sunny impression. This one here could easily be passed off as a summer photo:

The transition from winter into spring is among the less photogenic yearly moments. Too late for snow and too early for greenery, it makes for a boring scene.

It’s best to wait a couple of weeks and only start taking pictures again after this stretch.

The change from spring into summer is practically invisible. Nature is right at its best, and the scenery is shining with life.

Summer may seem like the best time to take “healthy” photos, but watch out—the ground dries out fairly fast, and if it doesn’t rain much, then grass can get that dry, light-yellow look—especially when it’s out in the open.

But even dry grass makes it clear that the cycle of the seasons is continuing. Instead of complaining, we can focus on the impending arrival of autumn inspiration.

In autumn, nature is very expressive, with yellow and orange joining in among its usual calmer colors.

Mists appear too, and depending on how many fallen leaves there are, you can work your way to melancholic pictures with a slightly sad spirit.

The arrival of falling leaves is different every year. This photo, for example, was taken in a different year than the one before, but calendar-wise they are only two days apart.

You’ll notice that there is also less light now. In the last photo, I used a quite average f-stop (f/9), and I raised the exposure time all the way up to 4 seconds. Keep in mind that this scene is not completely in the forest; it’s at the edge of a clearing.

The third picture shows just how variable autumn can be—this is yet another year, but 14 days earlier than in the previous two pictures. Here we can still see the green of summer, with the new autumn colors and their sharper tones already creeping into it.

Don’t be afraid to go wild with colors in your post-editing and to heavily increase saturation (or better yet, to use the “Vibrance” slider). For a landscape image without people in it, more saturated colors will look better than those that your camera can produce.

Although winter with its very short days can be depressing, you can still find some optimistic pictures.

Winter is dominated by white snow, with blue shadows falling upon it. Now of course you can white-balance your photos to get rid of the bluish shadows… but I think that gray winter photos actually aren’t as interesting as blued ones.

And it can be a very drab gray too. The white snow in the photos brings a traditional photographic problem—the snow reflects a lot of light and confuses cameras’ light meters, which then go on to produce dark photos.  So you’ll practically always need to set your exposure correction to at least +1 exposure value (EV).

Wintertime is filled with the mists that I love so much, and so I can take very dreamlike pictures. In this case, a picture with a fog so thick you could cut it with a knife. The background, about thirty meters back, is already on the edge of visibility.

If, like me, you’ve got a lot of material from the same place, then nothing can stop you from gathering it together and then turning your representative photos into an overview of the whole year, or an original calendar.

Don’t forget that photography isn’t just affected by the seasons; it’s also affected by the weather and time of day. You’ll generally get more impressive photos just after sunrise or before sunset, due to the side light.

For my collage, I originally thought I would place the photos on top of each other for a complex “trick” picture, but it turned out that every centimeter of camera positioning mattered. It’s not enough to say “and now I’ll kneel and lean on this tree” before each shot. You need to set your position even more exactly, so if you leap into a project like this, then I recommend writing down your last shot position as precisely as possible. You might even want to place your camera on a massive tree at a precisely chosen height, for example on a bare branch. In more urban areas, you might want to make use of a lamppost, railing, or wall.

For the trick project I have in mind, it’s simplest of all to just not take pictures up this close, and to concentrate instead on hills, mountains, and other wide-angle views. For these, every inch doesn’t matter.

But no matter what your goal, you need to plan your final output at least a little—and also to hope that you don’t forget about your spot a few months after choosing it. Do all this, and you’ll be rewarded with unique pictures, and with one thing more too. You’ll experience and overcome a fear of unsure results. In our digital age, a long-term project like this rekindles the old analog uncertainty: “When my picture is finally ready, how will it look?”