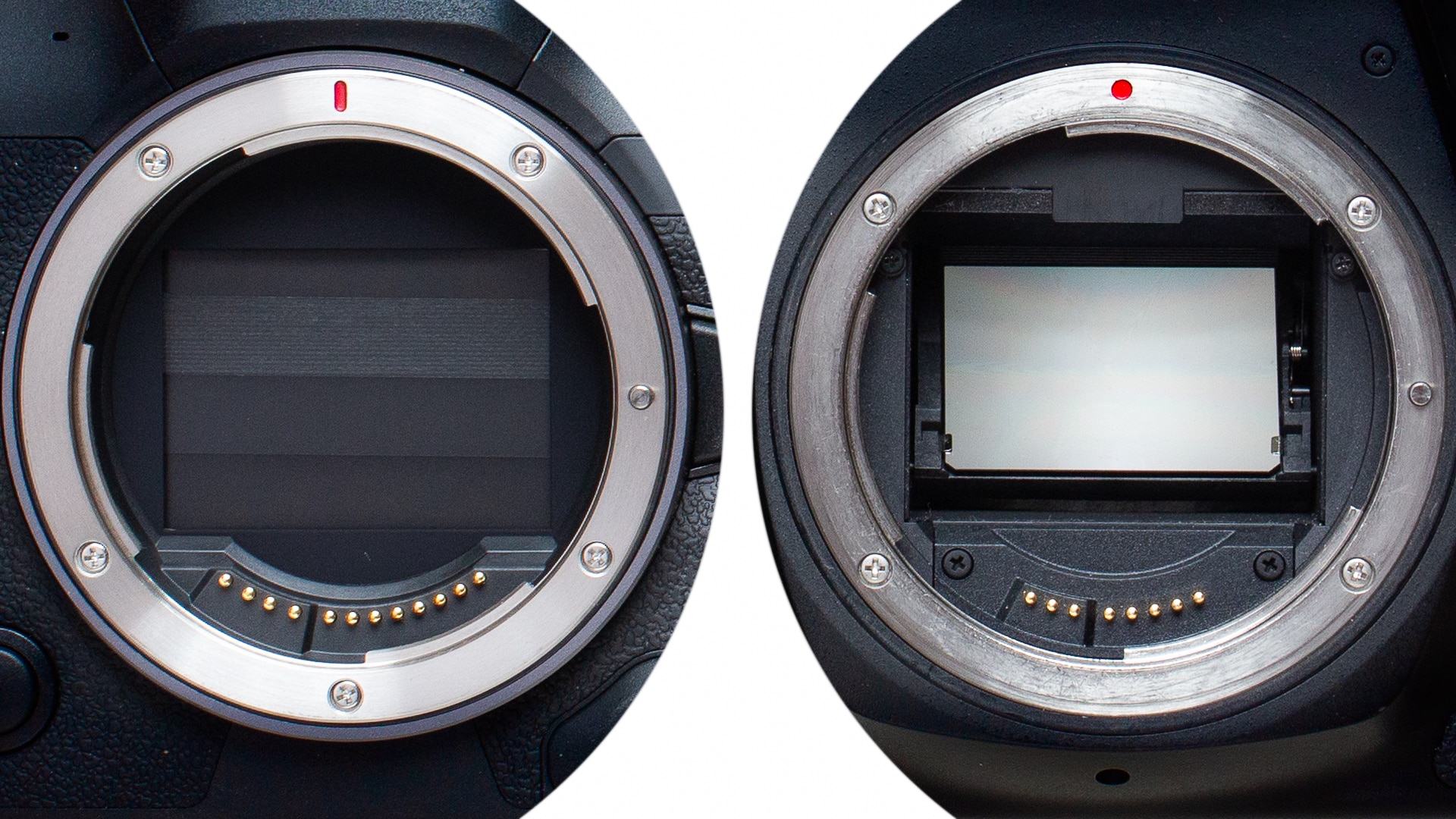 Mirrorless cameras are the future, gradually replacing DSLRs. Mirrorless cameras are built upon a completely different concept with its own pros and cons. DSLRs will certainly still be available for a long time and will be easier to get second-hand. It definitely makes sense to give some thought to which camera system to get.

Mirrorless cameras have already been around for many years. The first appeared in 2009, but this first generation couldn’t compete with the autofocus of DSLRs so they had trouble catching on. This is changing though. Mirrorless cameras, apart from some details, rival DSLRs. In fact, mirrorless cameras even outperform their DSLR counterparts in many respects.

I will explain the differences using a Canon 5D Mark IV, a favorite among professional and semi-professional DSLRs, and the mirrorless Canon R5, which is the next generation in the same line. While I recognize we are dealing with top-of-the-line cameras, even lower-end cameras can have similar characteristics. Furthermore, with the arrival of better processors, any missing features will soon be available in the lower-end models as well.

It’s all about the mirror

The difference lies in the construction of the apparatus itself. In DSLRs, a system of mirrors, or a glass prism, in the center of the body sends light from the lens into the viewfinder by reflecting it as the name indicates. This ensures that the photographer sees what the lens sees.

It’s a bit more complicated than that in reality. The picture in the middle is projected onto what’s called ground-glass and we see it in our viewfinder from the opposite side. This is important to note due to one disadvantage which we’ll get to below. The sensor doesn’t see the image until the moment we press the shutter button. Then the main mirror flips up, for a split second we see darkness in the viewfinder while all the light hits the sensor.

Mirrorless cameras see the world through the main image sensor, which constantly records light and displays this recording on the LCD viewfinder. The idea is similar to shooting with a smartphone, just with a different arrangement of components.

Autofocus is similar, but still different

I’m not going to repeat information from the detailed article about autofocus, so I’ll quickly summarize by saying that DSLRs use a technology called phase detection. Thanks to a partially translucent mirror, the light beams split into two. The moment you are looking in the viewfinder, the special autofocus sensor is also looking at the image. It basically chooses various points from within the image, which it looks at from various angles from the front glass of the lens. Then, it compares two distinct views, for example, left and right or top and bottom, and from their differences, calculates the adjustment necessary for focusing.

The first mirrorless cameras weren’t able to do this and focused much more slowly using a technology called contrast detection. This is becoming a thing of the past, however, because they have found a way to combine the previously separate autofocus sensor and main image sensor for taking photos. Dual pixels are the most advanced technology. With dual pixels, each pixel in the picture is divided into two halves and it can analyze the scene from left to right. Information from both halves is compared, the phase difference is calculated, and it is accurately focused.

The concept of autofocus is similar in the two systems, but there is an important difference: a DSLR is otherwise blind while focusing because it only projects the picture of the scene to us – the photographer, while a mirrorless camera is constantly processing the full-frame image even when we aren’t shooting and can analyze what it finds useful.

This innovation is truly a breakthrough when compared to DSLRs. It’s not necessary to use the focus-and-recompose technique and working with very bright lenses is much easier.

What’s more, you focus using the main image sensor. There is no need to repair inaccurate focus at the camera service shop or by using the autofocus microadjustment procedure.

Pros of the DSLR’s autofocus

The mirrorless camera reads the exact exposure we’ve set, as long as it hasn’t been set differently in the menu. This means that if we intentionally shoot an underexposed image, then it will only see darkness. It also won’t be able to focus in the dark. DSLRs, on the other hand, autofocus in all conditions the same.

DSLRs also stand out in their ability to focus on lines and objects of various orientation with cross-type focusing sensors.  Unlike mirrorless, which compare only right and left halves of the picture and can’t compare bottom and top views, DSLRs can also focus on horizontal lines, which its more modern counterpart struggles to do.

Pros of the mirrorless viewfinder

The viewfinder is able to display a complete image with the correct lighting, according to the exposure settings. At the same time, it’s able to display other information, such as a histogram for precise exposure correction (as seen in both images above).

It’s also indispensable that the correct depth of focus is displayed with bright lenses, such as those with an exposure of f/1.4. Standard ground-glass screens in DSLRs cannot do this and will display the picture as it was taken with a lens with a corresponding f/2.5.

Mirrorless cameras also offer other tools which help with manual focus. It has no problem visually indicating to the user how much a given spot is out of focus.

And if this still isn’t enough, instead of the entire image, you can display the detail of a chosen point.

Even today’s DSLRs have similar capabilities, but only in the Live View mode. Live View is when you bypass the use of the viewfinder and look at the back display. This mode makes them somewhat makeshift “mirrorless cameras.”

The optical viewfinder, our window to reality, will always react a bit faster than the digital one, even if the difference isn’t very big.

Similarly, there is no need to turn on the viewfinder, so taking the first photo is visibly faster.

A through-the-lens optical viewfinder doesn’t use as much power and DSLRs have a battery life that is several times longer than that of their mirrorless counterparts.

When discussing the pros and cons, it’s important to keep in mind that the quality of both types of viewfinders is an important factor. Optical viewfinders can be larger and smaller and LCD viewfinders can have different resolutions and varying refresh rates. Of course, the worse ones are found frequently in older or lower-end models. With some mirrorless cameras, you can have viewfinders that are slow and laggy. This won’t happen with DSLRs.

Other advantages of mirrorless

More often than DSLRs, they contain a system for the stabilization of the main sensor, so you can shoot longer exposure times or with destabilized lenses.

Their body is often smaller and lighter, because the mirror system and frequently bulky prism is gone. This has disappeared from even the cheaper DSLRs and has been replaced with several mirrors.

While shooting, a mirror does not need to constantly flip up and down. The result is significantly less vibration, which affects the sharpness of a photo. Due to the lack of a mirror, it is also possible to achieve faster sequential images while at the same time being quieter.

Some manufacturers have included other creative functions. An example is Olympus, whose camera allows images to be stored to a temporary memory while looking through the viewfinder and saves them after you press the shutter button. In this way, you capture the moments that led up to the moment the actual picture was taken.

Some more pros of DSLRs

Unlike mirrorless cameras, its sensor isn’t always active and therefore, won’t overheat. A cooler sensor makes less noise, which could make a difference for longer exposures of several minutes.

You don’t always have to use a lens cap. Yes, getting your lens scratched or dirty can be a problem, but if there isn’t a risk of this, you’re safe. Even if you left a telephoto lens exposed to the sun, the sun’s rays will harmlessly pass through the viewfinder. However, with mirrorless cameras, the light hits the sensor or the shutter blades and can cause harm. This isn’t just a groundless warning, as shown in the photos from the article from Lensrentals.

With DSLRs, dust on the sensor is less of a problem. This is because the sensor is deep inside the camera and most of the time blocked by the mirror. Some mirrorless manufacturers have their sensors covered by a shutter curtain when not being used. This however doesn’t solve the issue of a particle of dust falling from the lens onto the sensor when shooting.

Another advantage, in theory, is the wide selection of lenses for the given system. However, for the majority of mirrorless systems, identical lenses are available for use with an adaptor.

Mirrorless wins, but not always

The advantages of using a mirrorless camera are big, but do not fear, you can still get great shots with DSLRs. Also, if you don’t need the absolute best of what’s on the market right now, you can buy a DSLR secondhand for a great price and still get great images without anyone noticing it’s not the newest technology. To conclude, the most important idea is – no matter which system you choose, it all comes down to the eye of the photographer!

Other advantages and disadvantages of both systems can be found in the article DSLR vs. Mirrorless: Discover their pros and cons.

The Radial Filter: Brighten Up Your Portraits in Three Simple Steps