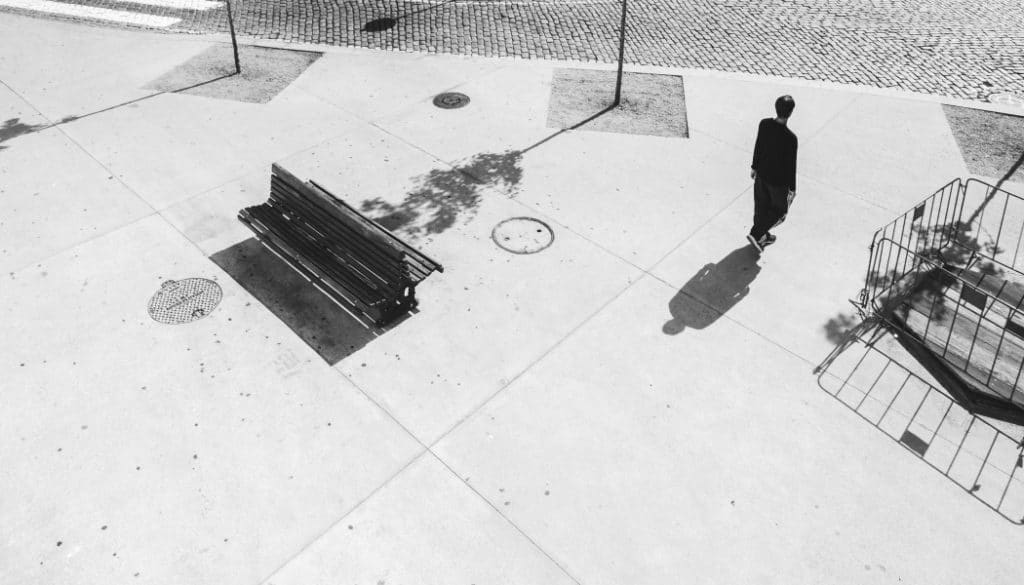 We see the world in color, and cameras can reliably record the colors we see. Despite this, a black and white conversion will often make a photo better. When does black and white pay off?

Is Color Important For This Picture?

Try taking a look at some of your photos and thinking about this question: Is color what’s really important here? Would the picture lose anything if it didn’t have any color? If so, then it’s probably not a good idea to convert it to black and white. Imagine you’re trying to photograph a gorgeous, colorful ara macaw. There probably won’t be any point if you’re shooting to black and white.

But that doesn’t mean that strongly colorful scenes should never be converted to black and white. Garish colors can often distract from your subject. And in some cases the colors in your picture can have absolutely no meaning for the mood or topic that you want to express. But when colors are a part of a photo’s topic, that photo should be in color.

Is The Photo Dominated by Geometry?

If your photo uses graphical elements and above all highly visible lines, then it’s ideal for black and white. Use the scene’s lines to get a dynamic composition that forcefully leads a viewer’s eyes. In black and white these lines stand out even more, and they’ll be all the more impressive.

Is the Photo High-contrast?

High-contrast pictures with rich, full shadows and large, clear, bright areas tend to work superbly in black and white. You see, as soon as you remove the colors from a picture, all that’s really left is the interplay of light and shadow.

High-contrast pictures have lots of black and lots of white, and not so many medium gray tones. And contrast is one of the things that can make black and white photos so interesting. Often colors steal our attention and rob us of the taste of contrast. So if you’re sitting in front of a picture where the difference between light and dark tones is dramatic, then don’t hesitate to convert it to black and white.

Does It Glimmer with Shadows?

When the sun is just above the horizon, it can cast long shadows, which a black and white conversion will then emphasize and highlight. Here as well you’re playing a game of contrast between light areas and the dark shadows that stick to them. Colors bewilder and divert all eyes from these shadows. So if you want to strengthen shadows, convert a picture to black and white.

Is Anything Brimming with Structure or Texture?

Objects with a palpable structure or texture, or any object with a characteristic surface… these are all promising candidates for black and white. This can mean anything from tree bark to peeling paint or wrinkled skin. Normally you feel texture with your fingers. But as a photographer, you want to make people feel it with their eyes. Your take on a picture should give your audience the feeling they’re viewing something smooth, rough, sharp, or soft. And that’s easier to do in black and white.

Is the Photo Dominated by Just One Thing?

Simple compositions look good in black and white. The ideal is to have a picture with one main subject that is set against uncomplicated surroundings. It’s important for it to be a bit isolated from its background, since in black and white, the two could otherwise blend together.

What Mood Do You Want to Create?

Often both the black-and-white and color variants of a photo have their strong points, and so it comes down to what you want your picture to say. Black and white boosts work with a picture’s drama. You can also use it to give a picture a darker or moodier atmosphere. Of course this doesn’t mean that black and white photos are always sad or dramatic. But it’s easier to steer in those directions than it would be with full color.

One nice example of this is any landscape with a sky full of clouds, where black and white underscores the sky’s structure, draws out its contrast, and makes the picture feel more dramatic overall. You can also get some atmosphere from objects peeking out of side streets, or landscapes drowned in fog.

When you’re converting photos to black and white, take care to keep your blacks black and your whites white, so that your pictures aren’t just drowning in bland shades of gray. After all, the magic of black and white photos lies in contrasts and in the interplay of light and dark. Even though the decision to convert a picture to black and white is a matter of taste and of the atmosphere you want to create, it’s always true that when you do go black and white, you want a bolder composition.

In any case, don’t worry—seek out clear lines, dominant figures, objects on simple backgrounds, and high-contrast scenes, and you’ll be fine.