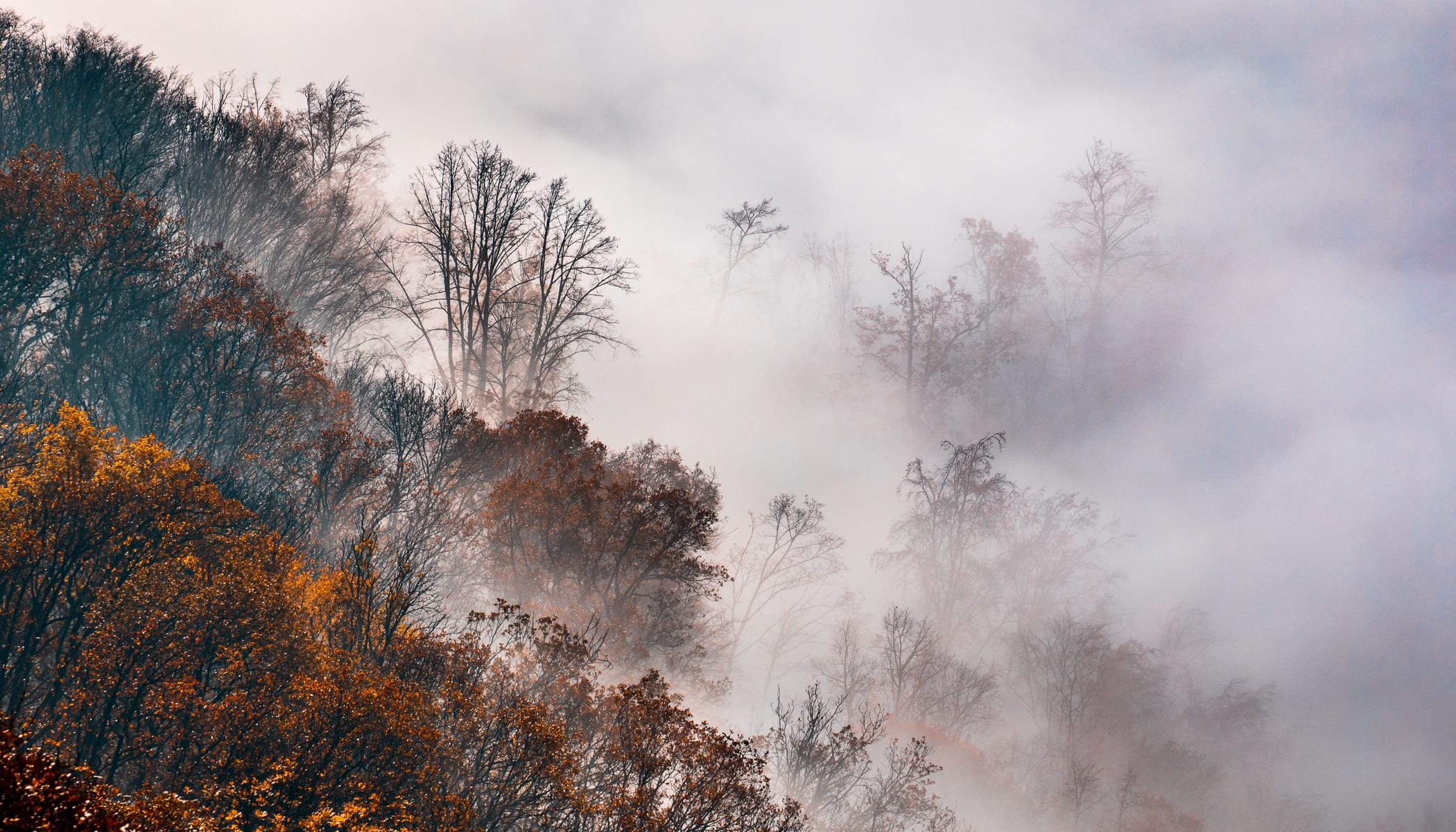 Fog is very photogenic. If you haven’t tried it yet, you should check out the kinds of pictures you can get with fog as your friend. In a majestic foggy landscape, you don’t even need an exclusive spot—you just need to look carefully around you. After all, fog can hide a lot of details that simply beg to be photographed.

There are actually lots of ways to photograph fog. You can capture it in vast mountainscapes, or in cityscapes. But in this article, I’ll be focusing on smaller scenes with smaller areas of fog. I won’t be going all the way down to macro, but I will be sticking more to tree-sized scenes than mountain-sized.

Details in the Fog

When fog is everywhere around you, you’re forced to choose things near by you as your subjects, because the visibility is very low. But at the same time, that’s also an advantage. For one thing, it means that elements in the picture will gradually fade away in the distance, and so its perspective will change, and anything in the background that might potentially interfere with the picture will fade out as well.

Gradually disappearing trees in the forest are thus one obvious idea.

Another type of subject that’s very photogenic and very accessible is roads. Just notice a nice stretch when you’re driving along, stop (safely), and shoot. You can put together your very own catalog of interesting little spots quite quickly this way.

Limited visibility filters away distant elements for roads as well. In our next illustration, there might be a city or a waste dump in the distance—but the photo provides a calm view of an isolated tree instead.

Inside the fog, you can use lenses with medium focal lengths or the lower telephoto lengths—roughly 35 to 120 mm. Naturally extremes above and below these are possible, but they’re rare.

At the border between fog and fresh air, traces of sunlight can be found, and they can lead to an impressive photo. Even if you have no photographic interest in the play of lights and shadows, you can at least appreciate the conditions that produced it.  Less fog would keep the light from being visible in the air, while deeper into the fog, the light rays would already have dissipated along the way, making them less visible. So if you can see sun rays, that means you’re right at the border, and the fog will end a short distance away.

So far I’ve talked about taking pictures inside of fog, but you can also get impressive pictures by standing aside and choosing distant dreamy details. This is one for the telephoto lenses and the super telephoto lenses (i.e. focal lengths over 300 mm).

Depending on the situation, you’ll be photographing fog above you or below you.

Fog below you usually means that you’re standing on a hill, you can see everything happening around you, and you’re taking pictures of wisps of fog meeting the landscape or houses. From a distance, the fog is like a rolling tide, so it pays to be patient and gradually choose the best parts of the briskly changing landscape.

Fog in front of you is a very common phenomenon nearby water. You can run into it by a pond at any time of year. Then just find an interesting part of the scene, and voila.

Fog above you is basically low-lying clouds. Sometimes it’s so low-lying that it runs into the hilltops, producing dramatic scenes yet again. So it pays to look up as well. You may find yourself rocked to sleep by boring gray clouds and lifeless light on the landscape, but the trick is to ignore 95% of the scene and use your telephoto lens to pick out just one small detail where the fog/cloud meets the ground.

I mentioned in the beginning that in foggy weather, the background is hidden, and so typical foggy pictures are relatively clean. Despite this, you can’t just rely on nature; you have to actively simplify your scenes to emphasize this weather’s essence.

This remains true in the forest. It definitely matters which trees you pick for a scene. The pictures below were taken only minutes apart, and yet there’s a big difference in how they look.

And if most of the scene suits your taste, but there’s still something minor in the way, you can always fine-tune the result on a computer.

Don’t Forget the Rules of Composition

In photos like these, the scene will be so simple that the composition stands out, so don’t forget the basic rules.

Perhaps the most common is the rule of thirds, that is: placing any important objects in the picture one third of the way in from the top, bottom, left, or right.

But it’s not always necessary; sometimes you can use a centered composition to the same effect.

It can also be interesting to frame the image, visually surrounding the subject with something in the foreground. In the example below, the camera is practically laying in the grass, so that its blades can make this more than just a picture of the sun’s reflection.

It’s great to include visual guidelines, although those can be hard to get without using buildings or at least streams. (Rivers tend to fade away too fast in the fog.)

The advantage of taking pictures in this kind of weather is not just that it brings you unusual vistas. With so few people around, you also have a higher chance of running into game animals close up and catching them unawares.

Fog: I Recommend It!

Lots of people just plain don’t like fog, and I understand that, but it’s a fantastic way to enrich your photographic portfolio with dreamlike pictures. Just dress up warm, and nothing will stand in your way.