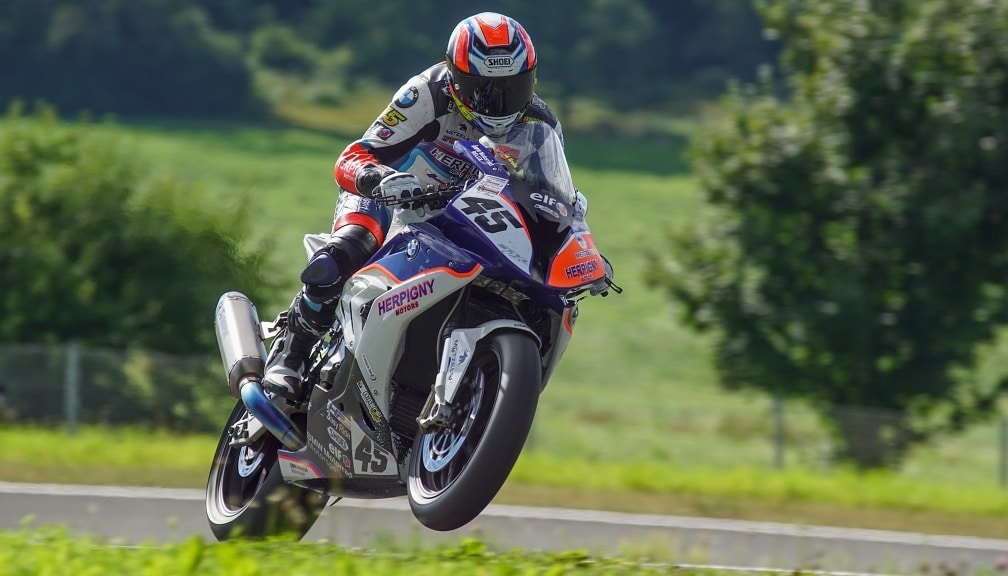 Photographing motorcycles is demanding, but exciting too. Every motorcycle race is more than just a thrilling show—it’s also a great opportunity to take unique photos. You just need to choose the right gear, find a good spot, and use suitable camera settings.

Study a championship calendar, and you might find that there are really a lot of them around you. From motocrosses and rallies to road races of all kinds. You just have to pick up your camera and head out.

The basics will be mostly the same for all of these. I’ll be illustrating them for you through the example of photographing racing bikes when they’re racing on public roads, which is my specialty.

The ideal camera here is a DSLR with a telephoto lens. For example with a 70–300 lens, you can take some interesting shots at races.

But a good compact will work too, if it offers a manual or semi-automatic mode. And don’t be afraid to try ultra zoom cameras too. But keep in mind that most of their zoom range will go to waste at the races.

Personally, I take 90% of my pictures with a lens in the 70-200 mm range on a camera with an APS-C sensor. Naturally the faster your camera or lens focuses, the better. At the races, you’ll really get some use out of a high-speed autofocus.

So what focal length is ideal?

When taking pictures from the fan zone, you’ll get the most use out of long focal lengths. Extra-long lenses are of course useful when you’re in the fan zone, far from the track. Like for example at motordromes.

If you’re shooting as an accredited journalist, you’re at a great advantage, as this will let you stand head-on against a motorcycle (once again with the help of your long lens). From the fan zone, you can only do this rarely.

Sometimes on the other hand you’re quite close and can get away with something short, in the 50–100 mm range. You’ll need an even wider lens when you want to capture the race environment too—not just the bikes.

We’ve actually published tips on photographing motorcycles before. We’ll say now as we said then: it’s best to start with a mode where you can manually set the shutter speed. Meanwhile, don’t forget to keep checking to ensure your photos are sharp.

Often people use sports mode when they’re photographing races. However, sports mode usually has about a 1/2000 s shutter speed, making its users shoot huge galleries full of frozen-dead pictures. Watch out for that!

A motorcycle, for example, has wheel that spin—and it’s good to have them spinning in your photos. It just looks better. Keep in mind that you’re photographing motion, not a static scene. Naturally the faster the stretch and the longer your focal length, the faster the shutter speeds you’ll use.

Meanwhile if you’re at a right angle to a bike at a given moment, you can take advantage of panning, where you use longer exposures. Generally at the track you’ll work in the range from 1/160 to 1/1,000 of a second. But if you want to experiment with panning, try longer times too.

Taking Pictures From the Stands

The simplest way to take pictures from races is from the fan zone. Your choice of spot will naturally depend on your photographer’s eye, but if you like compositions where there’s more than just a rolling motorcycle somewhere out on the blacktop, then you should count on spending a while seeking a spot.

Choose for example a place where there are also fans on the other side of the track. It usually looks good when there’s a cheering audience in a bike’s background.

In any case, keep in mind that races often have big audiences, and so there may not be room in exactly the place where you need to be. So it’s better to come a bit early.

When you’re shooting from the front row, you’ll probably have no trouble taking a panning shot—which looks especially impressive with rushing bikes. But shooting from inside a crowd is more complicated. You have to carefully choose a scope that you can afford without getting in other people’s way.

So dodge the whole issue if you can: for weekend races, come “early,” on Saturday, when there are usually training races preliminary rounds. There are fewer spectators at the track—and who can tell just by looking at your picture that it’s not the main event?

But if you want photos with fans in the background, don’t shy away from shooting on Sunday, when there are bigger crowds at the track.

Even though it’s more demanding, you can still take impressive pictures from the fan zone. After nearly every race, I see interesting photos taken by people who were clearly standing in the fan zone.

It’s often an advantage! They get different pictures than the accredited photographers do. After all, these tend to all flock to the same places, and so their pictures tend to be quite similar.

And what’s more, as a spectator you save paperwork, and you’re always standing in a relatively safe place.

First off—how do you get accredited? There are definitely still a few races out there where you can just walk up, sign a waiver, take a Day-Glo vest, and boom, you’re a journalist. But they are rare today—fortunately.

The standard approach is one where you’re shooting for a specific medium and thus helping the organizers to promote the event.

If you’re good with a camera and you like to photograph motor sports, then don’t be shy about writing to the editors of e.g. any medium that might be publishing info about the event. After all, they might not have their photographers on the spot. Especially for minor races. So they’ll definitely be glad to get photos for free.

As an accredited journalist, you’ll gain a number of advantages. From the shallow ones like (usually) not having to pay an entry fee, to the ones that will please photographers, like being able to visit areas that are off-limits to spectators. This is useful for finding the ideal spot from which to take your first “journalistic” photo.

But your freedom of motion here is not absolute. First of all, you have to care for your safety. It’s not exactly ideal to stand in a spot where you’ll be endangered the moment a cycle crashes. Keep in mind that no picture is more important than your health.

Some organizers will even recommend where to stand. Otherwise, if you have to, take a look around you and copy your fellow journalists a little. This will show you the tried and tested places.

It’s definitely best to shoot at the curves and anywhere else where interesting things happen. For example just behind the start, by a jump, or near a place with frequent crashes.

When you’re in the right place and nobody’s going to throw you out of it, everything’s somewhat easier than when you’re shooting from the crowd and someone’s always getting into your shot. Generally no-one and nothing stands between journalists and the zooming bikes.

You can often get really close, and can take advantage of even very wide lenses—maybe even under 30 mm. So you can produce truly impressive motion photos with the help of panning.

Or you can reach an angle where you’re facing a raging bike nearly head-on and can use focal lengths easily out past 400 mm. So in combination with a wide-open aperture, you can make a motorcycle fantastically pop out of its surroundings.

Photographing races with accreditation has its disadvantages too. For example the disadvantage that by signing your contract, you are taking over liability for injuries and damage caused both to you and by you.

Another disadvantage is that in time you may lose your photographic freedom. The editors can end up wanting you to produce specific pictures with a specific quality, quantity, and deadline. This can turn your photography for fun into a stressful chase, and that’s not everyone’s cup of tea.

But it can also turn out that you catch the bug, all goes well, and you manage to imprint your own style onto even magazine photos. And then editors will fight over you—and racing teams will too.

Vignetting—An Issue and a Blessing