The seeming motion of the stars is due to the Earth’s rotation around its own axis. The stars form concentric rings around the point that the Earth’s axis intersects in the sky—for the Northern Hemisphere, this is roughly around the North Star. The method for creating impressive pictures that capture this stellar motion is simple.

You can use practically any digital camera for taking static pictures that capture the motion of the stars in the night sky. You set up a tripod, keep it in one place, and take a large number of short separate exposures. Then you join these exposures into a single picture so that you can use specialized software to select, for each pixel, the brightest value that appeared among all of the individual exposures.

Thus when a star is bright enough, it is always the brightest point in the individual exposures, and it is expressed in the final picture showing the part of the circle that the star has time to draw. Both the picture-taking and the assembly can be automated, of course—and here we will describe how to do it.

Joining the Brightest Ones

Naturally you could blend the individual photos in Zoner Photo Studio, but only with enough patience—in our guide we will be working with dozens or hundreds of source photos, which is a little extreme for ordinary photography. Specialized software will only make this process faster. 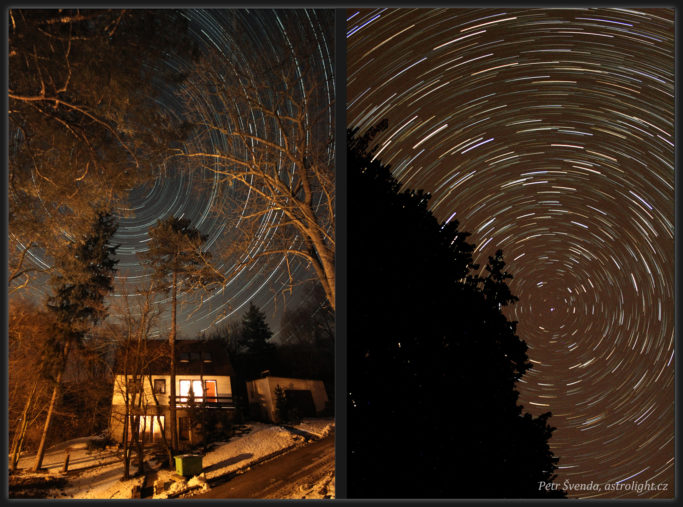 You can take the pictures with basic, commonly available equipment:

Preparing Before the Shoot

You can record the stars’ motion anywhere and at any time; here are a few tips for choosing a place, time, and composition before you head out:

Photographing meteorites is similar to photographing stars. Use your lens’s wide end, choose a 20–30 second exposure and an ISO of 800–1600, and check that you have the sky dark enough on an individual picture that it will not outshine any meteorite that arrives (since they fly for only a fraction of a second). Shoot repeatedly for as long as you can (you will be going back later to find the meteors; it would not work to wait to press the trigger until you see one). If a fairly bright meteor flies across the scene, check whether it is visible in the picture and how much so, and adjust your exposure if needed (if the sky is too bright or the meteor is rendered too weakly). For meteors, occasional passing clouds are not a problem; on the contrary, they make the composition more interesting. A waxing Moon, on the other hand, will be very distracting, but only shortening your exposure can really help with this. Try including a horizon in your scene—ideally the eastern horizon. Typically the most meteors will be flying after midnight, when your position is turned towards the Earth’s direction of motion. Every shower has what’s called a maximum, but they can be very visible even several days/weeks away from that particular date.

Your picture’s composition should work with these factors: 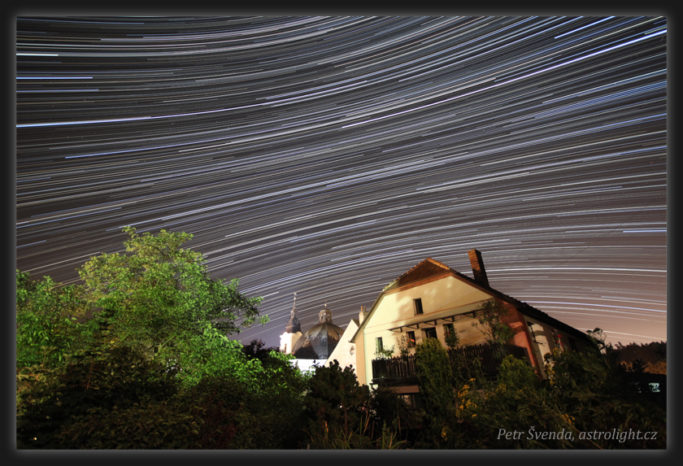 A composite of 405 exposures at 30 second intervals. The tree branches are lit by a street lamp; the orange glow above the southern horizon (bottom right) is from the nearby Czech city of Brno.
Canon EOS 500D, Sigma 10-20mm F4 EX DC HSM, F4, ISO 1600, focal length 10 mm.

Where I live (in Europe at around 49°), over the course of the year you see the whole Northern Hemisphere and a smaller part of the Southern Hemisphere. If you take a picture here while facing south, you capture not only the seeming motion around the North Pole, but also a small part of the motion around the South Pole. This transition is interesting in the picture in itself. The camera optics (e.g. fish eye) can also add a certain distortion to the stars’ motion. Around the winter solstice in my location, you can capture truly long exposures (over 14 hours of dark skies), during which the stars draw paths reaching past 180°. Of course for 14 hours of nonstop shooting, you need to be plugged in to a power socket and have a large memory card or a laptop. 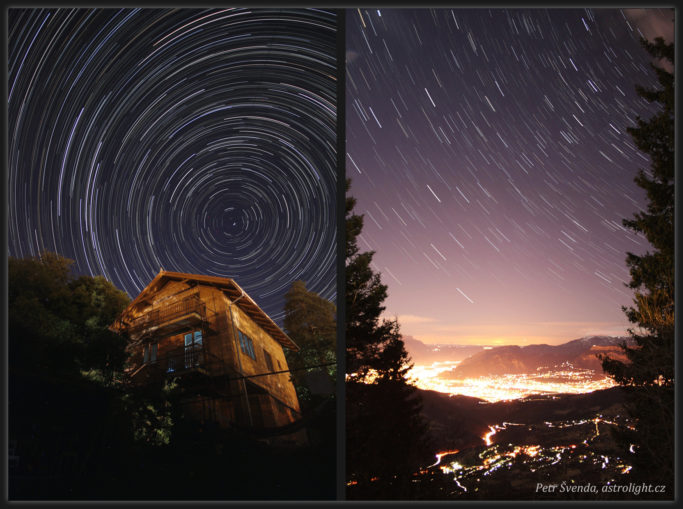 Left: A composite of 259 exposures at 30 second intervals. The bluish light in the windows comes from a screensaver on the laptop inside. Selected parts of a dominant feature can receive supplemental light from a headlamp, a flash, or a passing car.
Canon EOS 500D, Sigma 10-20mm F4 EX DC HSM, F4, ISO 800, focal length 10 mm.
Right: A composite of 37 exposures at 20 second intervals. The glow in the distance is the French city of Grenoble. Assembling this picture was laborious, because part of the snow under the camera melted during the exposures, shifting the scene. (I had not taken a tripod with me, and the camera was only laid on a plastic bag.)
Canon EOS 400D, EF-S Canon 18-55 mm F3.5-5.6, F3.5, ISO 1600.

Focus Before You Photograph

With enough light, you can use auto-focus. Otherwise, use manual focus. However, after focusing, always turn off automatic focus and secure the focusing ring using an adhesive gum or a cellophane tape such as Scotch Tape.

Typically you will want to focus on a distant landmark with fine details (e.g. a church) that is in your composition, rather than focusing on the stars. Mild unsharpness in the stars is not a problem; it is more a solution: it makes the stars’ paths more visible (an unsharp stars occupies more pixels) and adds color based on their surface temperatures.

How to Take the Source Pictures

Make one last check to ensure that the photos are exposed and composed correctly and that the tripod is firmly anchored.

Your overall number of exposures depends on how long you and your battery hold out, the weather, and the length of the night. The motion of the stars begins to be clearly visible after just a few pictures, but aesthetic and distinct motion only begins after about 2 to 3 hours. In three hours a star will make 1/8 of a full revolution, and usually the battery will also run out in this time. With exposures 3/4 of a second long, you will take about 360 pictures, occupying several gigabytes, more or less, depending on the camera resolution.

The stars move even when your camera is not recording them. So try to keep the pauses between exposures as short as possible (no longer than two seconds), or otherwise their motion in the composite picture will be discontinuous.

You will take your next step on a computer, working with your source pictures. 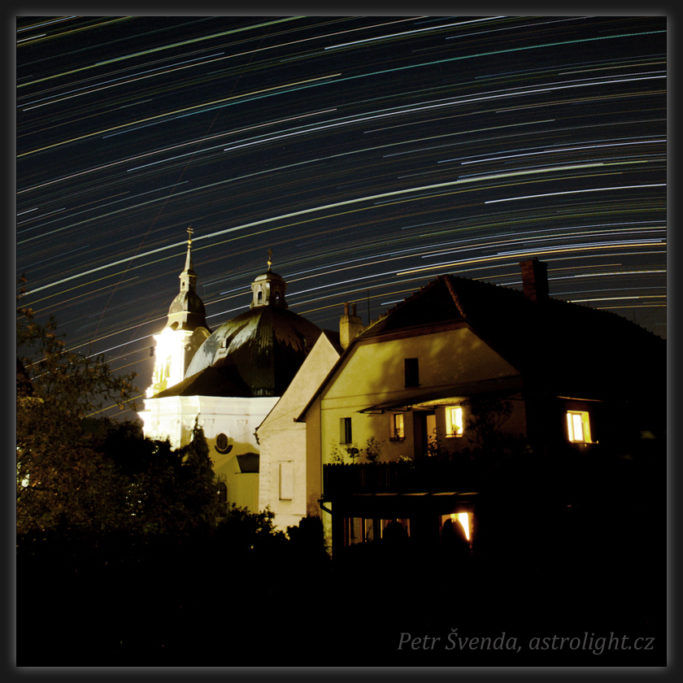 A composite of 206 exposures at 30 second intervals. The church is brightly lighted, and so an exposure with a low ISO was chosen, and after assembly, brightening was applied to the sky alone, to make the passing stars visible enough. The Curves function was used for this selective brightening.
Canon EOS 500D, Sigma 10-20mm F4 EX DC HSM, F4, ISO 200, focal length 10 mm.

In theory you can join the photos manually in Zoner Photo Studio. If doing so, always blend the photos using the Mode called Lighten. However, for large numbers of pictures, it is more advantageous to use the special freeware tool named Startrails (version 2.0 was used here); it automates the whole process. Then Zoner Photo Studio is used for editing the resulting composite picture only.

Startrails does not require any installation; you simply unzip it to wherever you would like. Within Startrails, take these steps:

Incidentally, you can also turn the individual exposures into a video using Build | Video. 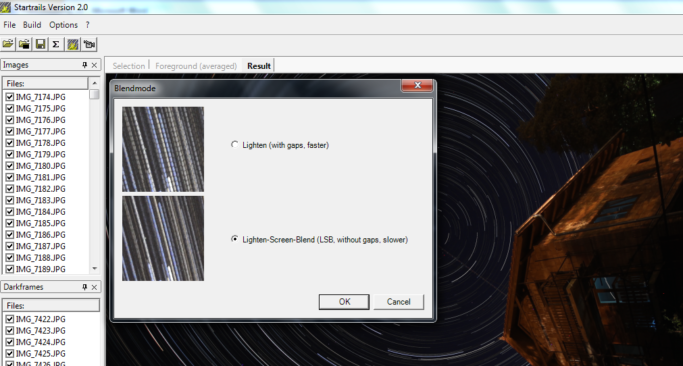 The Startails window after selecting pictures and choosing the Blendmode joining type.

The picture and the rotation of the stars can then be joined in Zoner Photo Studio to suit your taste and the given picture’s needs. For example you can brighten dark areas using Curves, mildly saturate the stars to emphasize their ages and surface temperatures, and remove any unwanted artifacts such as wires using the clone stamp.

If there is a foreground feature and it is damaged for some reason (blurring, overexposure, etc.), you can select a good-looking shot of the landmark (e.g. taken with different settings than the rest of the pictures, but without moving the camera) and combine this damage-free photo with star-rotation picture produced by Startrails. For this, open the picture with rotation in the Zoner Photo Studio Editor and paste the undamaged foreground feature into it as a new layer. Then align the two pictures (if they are not already aligned) and set the layer’s Mode to Linear Dodge. Then if no further edits are needed, click Apply to merge the pictures.

The picture is now ready. As a parting thought: keep in mind that photos with star rotation can also be taken on the road; you just need your camera, trigger, and an improvised tripod.