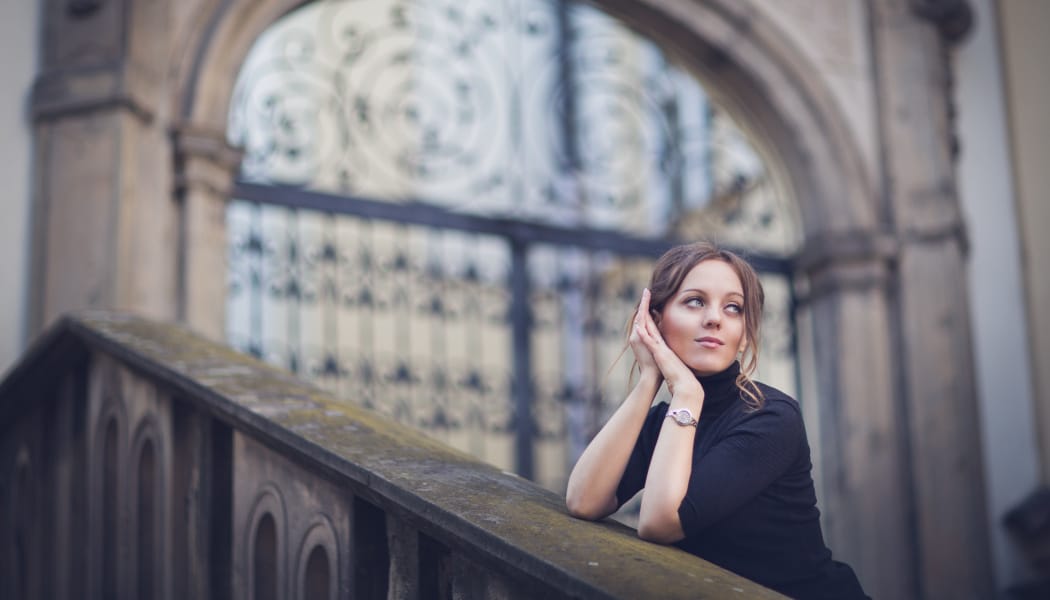 Busy streets, modern architecture and stylish cafés, but romantic nooks breathing with history. Or do you fancy taking pictures in an attractive interior or in the privacy of your own place? In an urban area, none of this is a problem. Read the second article of series. This time we focus on photographing portraits in the city. Whenever you will want to photograph anything mentioned, you shall value our tips.

The first part of this series was about photographing models out in the country. For this part, we’re moving on to the city.

Ignore Your Surroundings. But Watch Them Too.

During your shoot, the scene will change, and people will come and go. This brings with it two problems, which unfortunately have opposite solutions.

The first problem is that your surroundings will distract you, and above all, your model. If she’s not very experienced, the unexpected attention can end up bothering her, with her thoughts constantly running off to how she looks for passersby. Ideally, she’d be ignoring her surroundings, but that’s easier said than done. At least at first. With time she’ll get caught up in the shoot and start to succeed.

And here’s where the second problem arises: If you yourself get too caught up in the shoot, you can end up leaving your possessions (your lens bag, your light stands, your clothing bag, etc.) a few feet off to the side, and that can be enough for someone sticky-fingered to grab these valuables and dash. So you need to ignore your surroundings to some extent, but at the same time to watch them out of the corner of your eye… or have a friend or assistant watch them.

Old buildings have their charm, but don’t limit yourself to just them. Modern buildings can be inspiring as well.

Regular geometric shapes also let you play around with angles and perspective in some quite complex ways.

All the same, photographers do tend to make more use of older buildings. It’s likely because these buildings look romantic, and they’re often more sumptuous, and also perhaps because so many little photogenic nooks have popped up around them over the years. Old and important cathedrals and castles will also each have a whole grounds around them with smaller structures and gardens that can be worked into your photos.

In any decently large city you can easily switch among different styles of buildings during a single shoot, and in some places, you’ll even run into parks and small secluded spots with trees. The next two pictures are a good illustration of this; they were taken during the same shoot as the earlier picture with the blue building. (But the tree photo is only here for illustration; it really belongs more in the previous part, where I discussed taking pictures in the park.)

What to Look for in the City

When you’re taking pictures in the city, the usual rules of composition apply, and that means, for example, taking advantage of repeating elements. Colonnades are the most typical example.

Stairways, where the model can be elegantly positioned, are also very useful.

But that doesn’t mean that the model has to just sit there on the stairs. A long stairway running out into the distance is a nice graphical element for a shot’s background as well.

For us photographers, even unassuming structures like bus stops can be interesting, and if there’s nothing impressive around, even an ordinary wall will do.

Out in the country, your shoot tends to stop when the sun sets. In the city, that’s not the case. Even the most ordinary pictures look special under the streetlights. The time around Christmas when there are lots of lights in the streets is especially good for this. But you can head out with a model into the night streets at any time of the year.

You’ll have less light available at night, and so you’ll need to either use an external flash or watch the lighting around you. That second approach can also work out to be a good photography exercise. For example, even with very good equipment, I was almost unable to take the picture below. In the end, the solution was to move closer to the houses and make use of the illuminated shop window to the left of the camera.

The Interiors of City Businesses

The city offers many other places to take pictures besides just its streets. With a bit of tact and with permission from the staff, you can take pictures inside of a cafe or a similar establishment. Typical props for your model include her favorite drink—and this is also a great way to keep her hands busy!

You’ll find lots of photo opportunities at a cafe, including taking pictures through its front window… if its table positions make this possible. However, other guests will often get in the way of a picture, so it pays to do your shoot before or after peak business hours.

When you’re shooting from below, you can place other elements in the foreground. This makes the picture more interesting. As for props, besides the mentioned coffee, you can make use of a straw, other tables, chairs, or (with enough chutzpah) other guests.

Your Own Interior, or a Rented One

Taking pictures in your own spaces has some enormous advantages. You’re alone with the model, nobody is distracting the two of you from the shoot, and your photos can make full use of the surroundings—even in ways that would normally draw stares.

Your model will also have an easy time changing clothes. Spaces of your own are more pleasant to work within this respect compared to when you’re taking pictures in the streets, where this trivial little operation isn’t trivial at all and you have to plan it out.

However, if you don’t have your own spaces available, then you just don’t. But you might be able to rent out a hotel room or a studio. And studios are often furnished to look like elegant rooms. I count this as something separate from an ordinary studio room with an endless paper background. I’ll be discussing those studio rooms in the next part of this series. In some studios you have access to both, either for a single price or for an added fee—it’s good to read over the conditions in advance.

Outside of the price, using a furnished studio is a lot like taking pictures at home. You’ve got complete freedom for wildly creative photos.

We’ve looked at model photography in the great outdoors and in the city; next time we’ll be looking at a quite special subgenre: shooting at a studio with an endless background. So look forward to it, and don’t forget to practice!