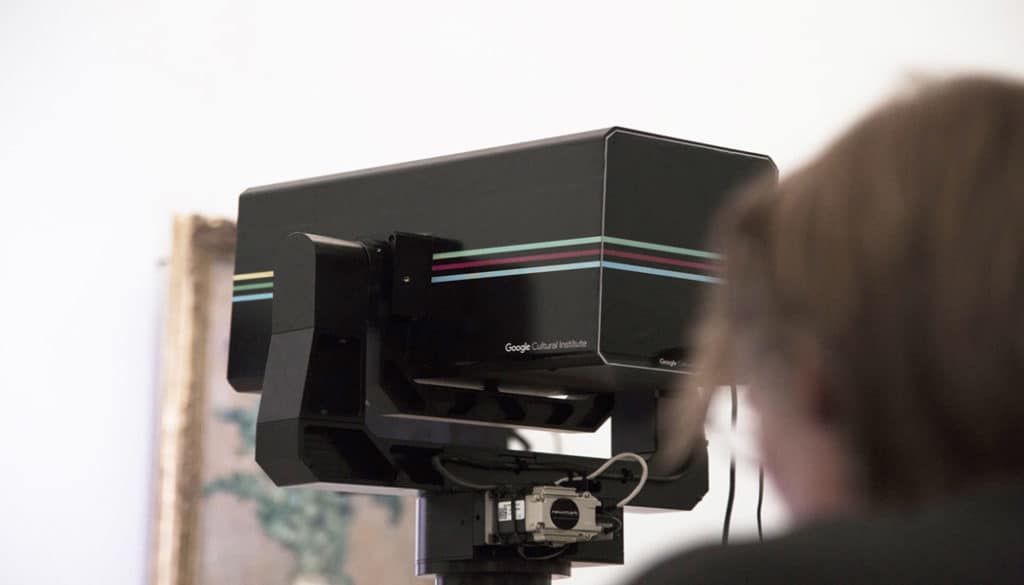 One of the most important aspects to both photography and art is detail. Upon initially glancing at either a great photograph or famous piece of art you may, of course, be initially impressed – but it isn’t until you begin closely studying the details that you become completely immersed and develop a true appreciation for the particular work.

It is undoubtedly with that notion in mind that the Google Cultural Institute has been working on the Art Camera project that uses robotics and specialized gigapixel software inside a digital camera designed to document famous works of art with painstaking attention to all the minute details that each holds.

Devil IS in the Details

Google explains that the camera uses sonar and laser to both focus and line up portions of the works, which it photographs bit by bit. The company adds that every image captures the colors and brush strokes that went into making each masterwork in astonishing detail. The system automatically composes the thousands of pieces that make up a piece of art into a cohesive whole. These gigapixel images, that contain more than 1 billion pixels, can reveal details that are actually invisible to the naked eye. By taking hundreds of close-up, high-resolution images, Google’s software pieces the images together to create a digital copy of the art.

“So much of the beauty and power of art lives in the details. You can only fully appreciate the genius of artists like Monet or Van Gogh when you stand so close to a masterpiece that your nose almost touches it. As you step back from the brush strokes, you wonder how it all comes together,” Google explains on their blog on the topic. “At the Google Cultural Institute, we know that people love experiencing art in close detail. Millions of people spend time exploring our ultra-high resolution “gigapixel” images, inch by inch—spotting something new every time, like a hidden signature or the individual dabs of paint that give the impression of shimmering, turbulent waters.”

Google is not the only tech giant working on these so-called “supercameras” as researchers at Duke University have also revealed a similar model that they claim will have military, commercial and eventually civilian applications, adding that a handheld gigapixel camera may one day be possible.

Regarding the recent Google effort, Ben St. John, an engineer at the Google Cultural Institute said in a released statement, “To make sure the focus is right on each brush stroke, it’s equipped with a laser and a sonar that — much like a bat — uses high frequency sound to measure the distance of the artwork. Once each detail is captured, our software takes the thousands of close-up shots and, like a jigsaw, stitches the pieces together into one single image.”

Google tells us they have built only 20 of these Art Cameras to be used for the aforementioned archiving purposes and that they will only be working on flat, 2D images for now. Will be interesting to see where the company takes this idea and this tech as it would appear some more potentially immersive possibilities certainly exist. You can view the over 1,200 paintings the camera has captured to date here.