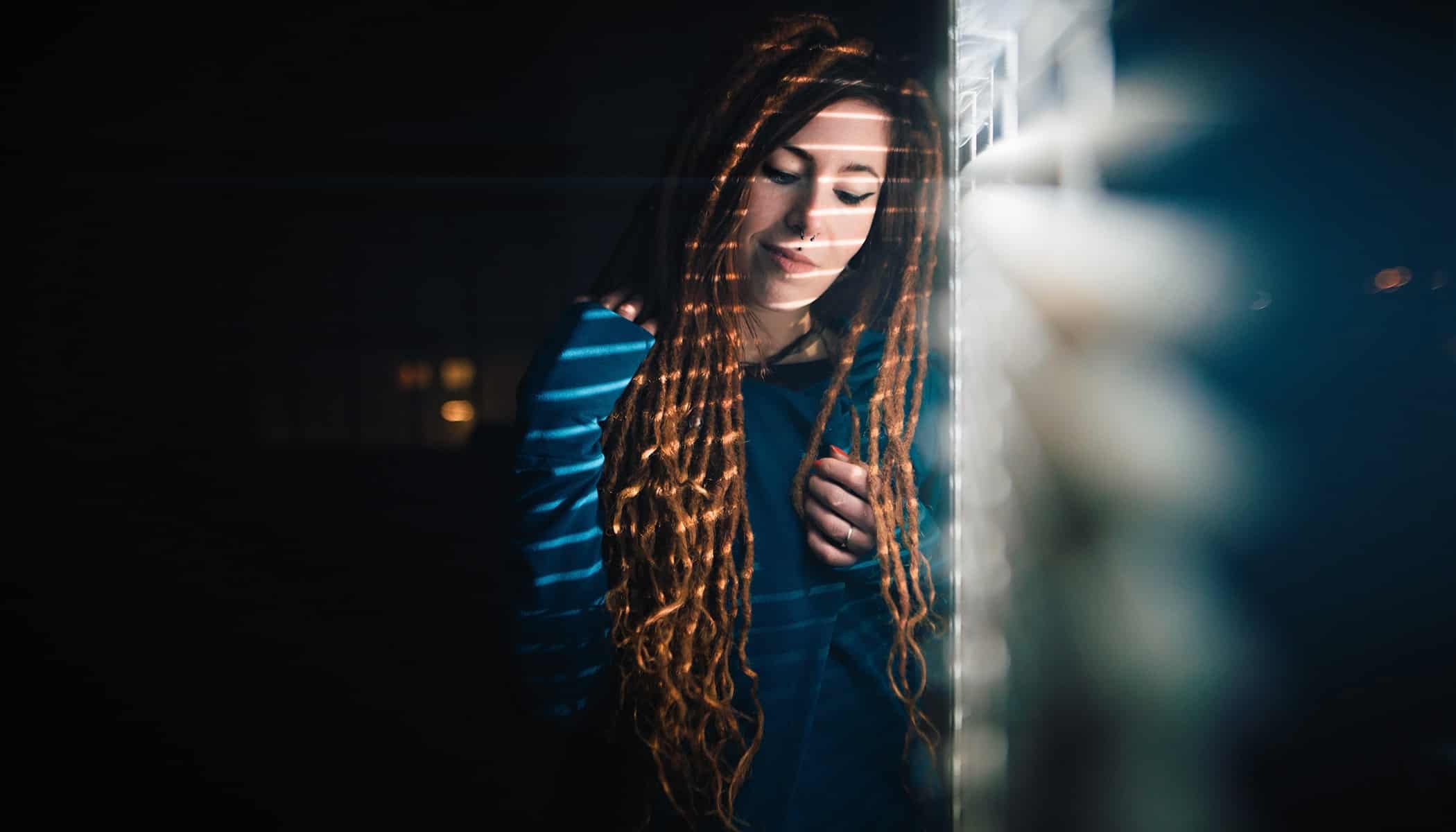 Light rays will improve composition, tell a story, and open the door to many new creative possibilities. Read about how to create light rays even at home. All you need is a few basic items that you are sure to find lying around the house. Get inspired and you’re sure to come up with more ideas for great photos during the photoshoot.

Light rays appear when there’s something in the air for them to bounce off of. Smoke, fog, dust particles, steam… Any light source captures it and creates a ray of light. When shooting indoors, fog is the most practical. Then, all you need is some directional lighting, an object to shine the light through, and you can begin creating!

Of course some type of steady or strobe light would be more professional. But we wanted this tutorial to allow you to try out the process with items ordinarily found at home.

We used an ordinary LED pocket flashlight that costs no more than a few dollars and attached it using a simple holder to a tripod. The advantage of using a flashlight is the option to adjust the width of its beam using the front of the flashlight. This isn’t rocket science. Flashlights have always had this feature. It allows you to create directional lighting and as a result, light rays.

Finally, we filled the entire room with fog. Smoke, steam, or dust particles also work, but fog is reliable and allows you to breathe easily indoors. A fog machine for making light rays is probably one thing you won’t be able to find at home. Then again, it’s not such a major investment.

You can also get by without a fog machine. If you want your portraits to consist of shadows instead of light rays, read the article Learn to take stunning portraits through window blinds.

For a simple effect, cardboard with holes will do

We attached a piece of cardboard with holes poked in it to the second stand. Here, bigger is definitely better. We struggled a bit with the size of the cardboard because the edges were visible and required more effort to hide when composing the photograph. Nevertheless, we were able to come up with several solutions right away.

The first simple solution for the unsightly box was to shoot perpendicularly and capture the light rays from the side. This way, the light source was not in the shot.

In the other example, I photographed from a greater distance. This way the entire cardboard was able to be hidden behind the model. Theoretically, a smaller piece of cardboard would also work in this situation.

Flashlights form the backlight for a majority of our photos. To light the face from the other side, I used a personal favorite of mine, an LED light stick.

Is a pocket flashlight enough for this type of effect? More than enough!

For this type of photoshoot, a fancy light is not necessary. It’s actually undesirable. When I set my flashlight at full strength, the light reflected back from the cardboard, then off the wall, and filled the whole room with unsightly reflections, due to the white walls. Darker walls are one solution, but you may not have these at home. So we set the flashlight to half strength.

When photographing up close, we encountered a logical problem with the cardboard. In addition to the light rays, our “artistic addition” was visible. However, photographing right next to the cardboard with holes gives you more creative possibilities. So in this case, we needed to resort to retouching. Otherwise, the issue can be solved using darker cardboard with a larger surface area.

In any case, retouching is not a problem. It can be done in Zoner Photo Studio X in a matter of a few clicks. If you’re not sure how to do it, the article How to retouch away wires, trash, and more in your photos will help. 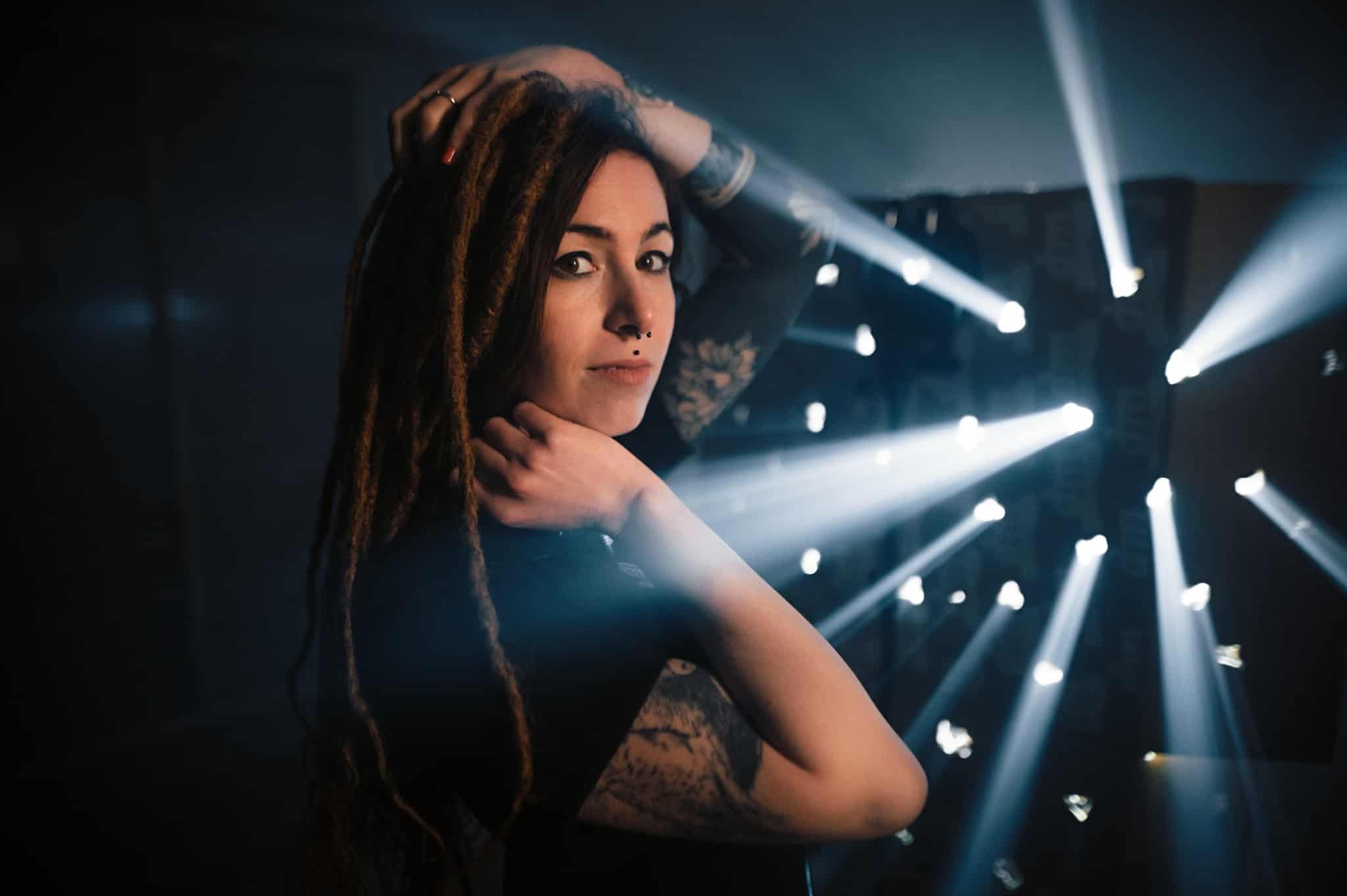 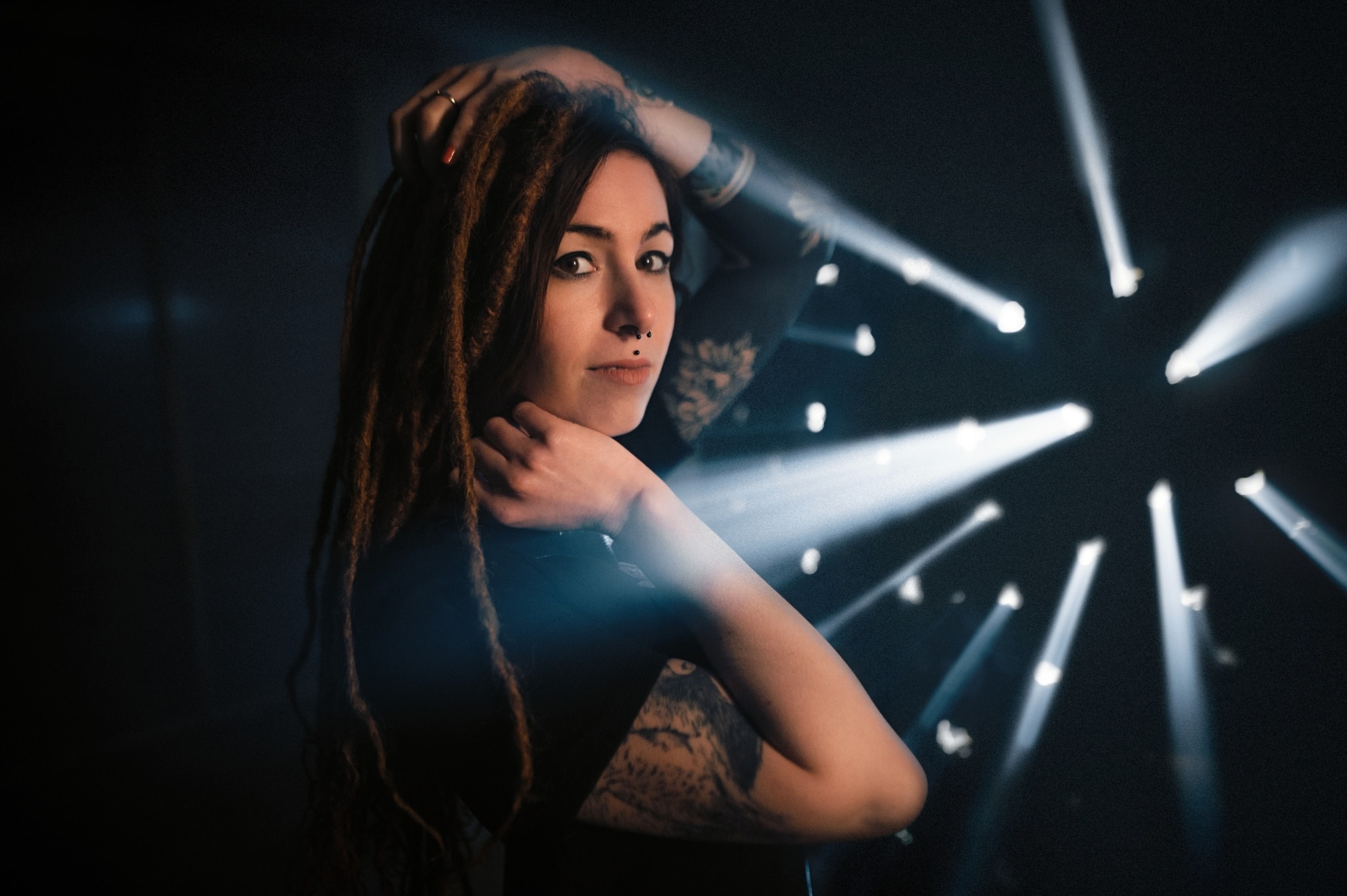 The second half of our photoshoot was dedicated to window blinds. It is a commonly-used effect. Window blinds cast stripes on your subject. If you have window blinds and the sun is shining through them, you can get some interesting effects.

However, if you don’t want to rely on outdoor light and you don’t live on the ground floor, where you can shine a light through the window from the outside, there’s another option – just like we did with the cardboard, mount the blinds to a stand.

In this manner, you’ll get even stripes of shadows. Here, for a change, we shone the light through the blinds so the flashlight also formed the key light.

When shooting from the side, further from the blinds, the atmosphere is darker and the face is divided into two halves.

There is also the option to photograph in line with the window blinds, or, at a right angle to the direction of light. I deliberately photographed at the level of the blind slats even with the eyes, because this composition works and draws the viewer’s eyes right where I want them.

Striped shadows cast on the face aren’t the only thing you can create using window blinds. Just like in the first part, we also photographed directly into the light.

Because window blinds aren’t as unsightly as a cardboard box with holes in it, it’s not necessary to hide or adjust the background. In switching off the second light, an intriguing silhouette is formed.

Stagelike lighting? Again a small flashlight will do

The last and easiest lighting experiment was to create a simple beam of light. This means we didn’t shine through any object, but rather directly.

This type of lighting may bring to mind a concert stage or police search. It depends on the context and your imagination. The main subject is always placed at the end of the light beam. This improves composition and grabs the attention of the viewer.

Tip: Use light beams with other genres too. Take a look at our article Crimes after dark – How to do a Film Noir photoshoot.

The key light and backlight are set up opposite one another. This creates a sense of drama.

Brush the dust off your flashlight and start creating! There are plenty of options to explore. All you need to do is get inspired and have at it!

The 10 Most-read Articles of 2019. What Were our Most Popular Topics of the Year?