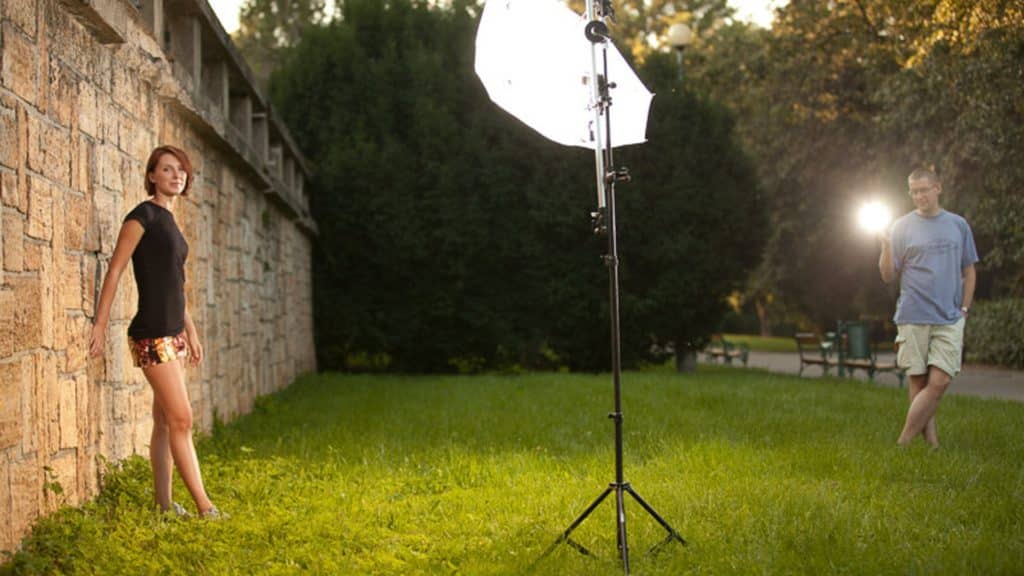 When photographing landscapes gets old, and you’re tired of the city, you often end up photographing people. Now, pictures of your friends at the bar do have a certain something, but in this article, we’ll focus on more serious work: outdoor portraiture, with the help of artificial lights.

There are many different environments you can use for portraits. Some people prefer the studio, but not every photographer even has one, especially since they are hardly free. Meanwhile, nature has many options on offer here, and above all, it lets you easily give the subject some atmosphere via their surroundings.

Light Is the Foundation

There are a lot of ways you can approach lighting for outdoor photos. The simplest, of course, is to experiment with the light of the Sun. The advantage of this solution is that you aren’t weighed down with unneeded equipment, and so you can move quickly from place to place.

But to get sophisticated pictures, you need accessories (or improvisation). One classic piece of photography gear for outdoor portraiture is the “reflector.” These are typically called 5-in-1 reflectors on the market, and they are white, translucent fabric stretched across a flexible, collapsible frame. They’re designed to be usable in 5 different color variants (e.g. transparent, white, black, silver, and gold).

When you are using one outdoors, its purpose is to capture light and shine it at the model from a different direction than the one in which the sun is shining. This can dispel what would otherwise be very dark shadows.

Work with a reflector is easy—you can judge its effects immediately and precisely at any moment. But for a reflector, you practically have to have an assistant with you to hold it and turn it as needed. But still: reflectors are cheap, effective, and just plain cost-effective.

If the sun isn’t shining, or you want to try more complex lighting, then you will have to turn to your own light source. That means either a studio flash (and with it, either a generator or a special battery) or an ordinary external flash, the type normally inserted into a camera hot shoe, but here you’ll be using it outside the camera.

A powerful flash can “outshine” even the sun; meanwhile, external flashes are small and easily portable. And also, even these smaller flashes can be used for complex effects such as creating your own “sun,” as you can see from the pictures below. I prefer the second method, because it’s practical, and it lets me experiment.

You may already own an external flash, and so for you the only question will be how to fire it remotely. There are lots of Nikon bodies that can do this. But for other brands, or for more reliability, you can buy a radio system for remote flash firing. There are lots of these out there, and each has slightly different abilities than the next. Covering them all would be worth an article of its own. (If you’re interested, say so in the comments.) But for experimenting, you can still make do with a cheap Chinese flash firer.

However, the flash-based route does complicate things a bit compared to a reflector. This way you can’t see the effect of the light until you take the picture, and your light output relative to the sun is relatively low, which can be rather limiting. Also, depending on your choice of camera and flash firer, you will probably have to keep the exposure at about 1/160 sec. or longer. (Explaining this would once again be a matter for a whole other article.) Thus in some cases, you may want a tripod.

You can also use several lights together as a system. This solution isn’t as expensive as it might at first seem, because old, used flashes can also be used as a part of the system. These are cheap on the market, since they lack the automation of modern cameras (which you don’t need), and yet they still have the power you need. Used Nikon SB-28’s are typical favorites here. With a whole set of lights, you can do things like create an elegantly lighted shot in a shaded location.

I’ll stop here—this is supposed to be an article, not a saga. But if you want more detail on any aspect of this topic, feel free to comment on what you’d like me to write about in the future. Different ways of firing flashes? Photography with lights in the indoors? Or in a studio? This isn’t an empty offer—this article itself was written in reaction to a reader comment on an earlier article!

What Are Photos Made Of? Learn 5 Basic Elements in Photographic Images