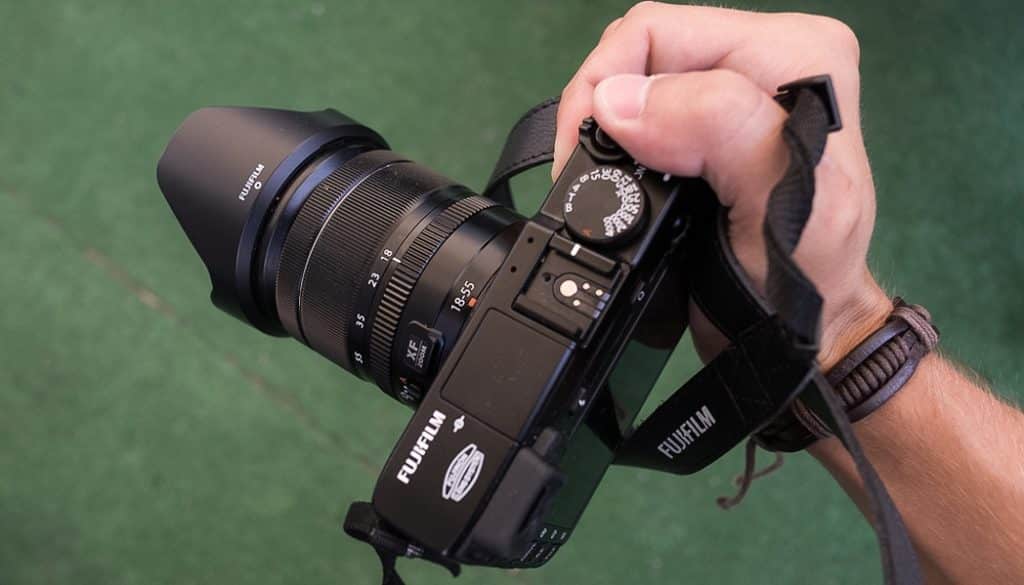 After years with a DSLR I tried out a mirrorless camera, and I was pleasantly surprised by this camera’s controls, its outputs and dimensions, and its great usability and practicality. But it has its downsides too. Today’s article is a sort of mini-review of my “switch” to mirrorless.

I originally wanted to check out the Fuji EX-2 mirrorless camera during my vacation on the Italian island of Elbe, but due to the great interest in these cameras, I didn’t manage to get one until after leaving for that trip. So I ended up taking a DSLR to the Elbe instead.

Even though I’m not a photographer who “has” to have the best gear—I basically can get by with just a camera body and a medium fixed lens—the immense heat, the rocky terrain, and dehydration all took their toll. I really wasn’t in the mood to drag a heavy DSLR around with me.

That’s why in the end I only took just a few pictures on the Elbe with my DSLR. Even though my kit was minimal, just my DSLR on its own is heavy and bulky.

What’s more… photography is about light. And the daytime light was very strong, and taking photographs with interesting light so I could make full use of the potential of a DSLR was a difficult, almost impossible task.

The solution was logical and easily anticipated. I let my DSLR do its sitting-on-the-table thing, and didn’t take it out for even one more shot.

Switch to a cell phone

I started using my cell phone, which can take some really nice pictures when it has enough light. Which it did. And when you respect the basic rules of composition and you edit your pictures a little in for example the Editor part of Zoner Photo Studio, you can get even nicer pictures than that. For documentary vacation photos of the “we were here” variety, a good cell phone is more than good enough.

Just like the name says, the main difference between mirrorless and a DSLR is the absence of a mirror. This makes mirrorless cameras much smaller and lighter. In most mirrorless models, the image is passed on to the focusing screen and to the display electronically, rather than optically like in a DSLR. The advantage of the optical image transmission used by DSLRs is that you see the scene as it really is. An electronic viewfinder shows you how the scene will look after you press the trigger, including exposure, reflections, etc. But mirrorless cameras can have problems in bad light conditions.

I picked up my mirrorless for testing in FUJIFOTO after getting back from that vacation. Even though my “mirrorless + Elbe” plan failed, I decided to still go ahead with testing a mirrorless, mainly so that I could see how practical mirrorless cameras really are. You can determine what kind of pictures a camera takes fairly easily thanks to technical reviews… but those aren’t for me. You see, I’m more interested in the emotional and practical side of a camera. I want to know how well I can shoot with it, and whether or not it’s better to use than a DSLR.

When I opened the small box containing an even smaller metal box labeled “X-E2,” it immediately looked better than it had on my monitor or in storefronts. I saw high-quality, precise construction, “just right” weight, a reassuring “Made in Japan,” real physical controls all along the exterior, and a very intuitive button placement.

I also picked up a kit lens, a basic 18-55 lens with a range of F2.8-4, which also pleasantly surprised me. When I compare it with the Canon or Nikon kit lenses… it’s a whole new story.

Camera groped, lens attached. Here I have to squint a little, because with the kit lens this camera seems quite large. Of course it’s not as large as a DSLR, but it still won’t fit into a pocket. I have to hold it differently than a DSLR… surprisingly it’s quite pleasant to hold, because it’s not as bulky.

Right-eyed photographers have an advantage here, because the viewfinder is on the left side of the camera, and so they won’t have to wipe noseprints off the viewfinder after each photo.

First Shoot and a Closer Look

Nikon and Canon fans may at first be confused by the lack of a mode wheel. But Fuji has an elegant solution here.

For perhaps the most-used mode, the A shutter priority mode, set the speed to automatic, and set the shutter on the lens. Almost the same as on classical full manual cameras. Speaking of which, to set full manual mode, use the time wheel to set the exposure time.

That may be clear for many users, but because of my habits from Nikon and Canon DSLRs, it took me a while to discover it. And I think I won’t be the only one.

After taking several shots and fine-tuning the various functions and colors, I’ve formulated my first thoughts on this camera.

I had been worried about the electronic viewfinder. After all, mirrorless cameras do lack a mirror. But my fears were completely unfounded. On the contrary, I took it as an advantage, because I could see how the photo would look in the end (colors, exposure, and even reflections) even before pressing the trigger. With a mirrorless, you don’t have to check your photos afterwards, and you can keep on shooting, because you know how each photo is exposed (dark or light)—there’s even a histogram. So you can fine-tune each photo even before it leaves the camera, and avoid having to redo shoots.

You fine-tune the exposure in shutter priority mode using your thumb, via the EV control wheel.

The built-in level is another pleasant surprise, and it prevents a lot of “man overboard!” photos. The level is quite visible, and yet it doesn’t get in the way of your photography. And it can be turned off.

Already after my short experience I have to praise the Auto ISO feature, because it makes the camera more usable on the go and keeps it “always ready” for a shot. You just set minimum and maximum values, and away you go. I would say that the ideal, most flexible combination for experienced photographers is a combination of shutter priority and Auto ISO with a maximum exposure length of 1/160 (because of motion), and ISO values from 200 to 6400. You don’t need to be afraid of high ISO values; they are enormously better than using a flash. That’s because unlike a flash, they don’t destroy a scene’s atmosphere.

My experience with photographing friends and acquaintances is that they almost always avert their eyes when I point the lens at them. Although I ran into this on my Fuji too, thanks to its small size I ran into it a lot less than with a DSLR. Evidently it’s because shooting with a display doesn’t feel as professional to people as shooting through a DSLR viewfinder does.

Thanks to this advantage I could take a lot more snapshots than usual. Nobody even thought to think that I was taking documentary photos. This was a very nice discovery!

If you have a lot of experience with a kit lens, then the large lens size that I mentioned at the beginning of the article won’t be a barrier, and you’ll be carrying this camera with you everywhere. After all, the best camera is the one you’re actually carrying. Carrying your camera more means taking more great pictures.

With my mirrorless camera I take a lot more pictures than before, and it’s all because this camera is easier to carry and less conspicuous. However my primary style is not about spontaneity, and I wanted to try this camera in pictures that require some setup, too.

The Fuji in Non-snapshot Photography

This camera turned out to work well in non-snapshot photography. Obviously its outputs aren’t on par with a modern full-frame DSLR with a fixed lens. But they’re still very good—almost surprisingly good. My only complaint is that the battery doesn’t last for as many pictures as in a DSLR—so with this camera, get a backup battery.

Lightness, smallness, near-invisibility—these are the main pluses of a mirrorless. The pictures you’ll get are almost on par with a mid-range DSLR. But DLSRs win out when it comes to battery stamina and lens selection.

Every photographer has their own priorities, and so it’s good to “get your hands on” both types of cameras and only decide after that. Or to simply own both types.

But if you aren’t a professional photographer whose photos are being closely examined by renowned critics, then you can put your faith in the outputs from this great little camera. The fact is that I took these pictures with “just” a kit lens, and I didn’t have a fixed portrait lens available to me.

My impressions from switching to a DSLR to a mirrorless are very good, because the camera size brings me possibilities that I never had before. Not just because it’s a lot more practical to carry, but also because it’s so inconspicuous that I can take pictures that a DSLR would make impossible, because people would notice me.

I definitely recommend this camera for people who like street and documentary photography, and for people who like to have their camera with them everywhere. And for travelers too. But due to my particular line of work, for as much as I’ve fallen in love with my mirrorless, I’ll still never completely give up my DSLR.

Everything You Need to Know About Graduated Neutral Density Filters