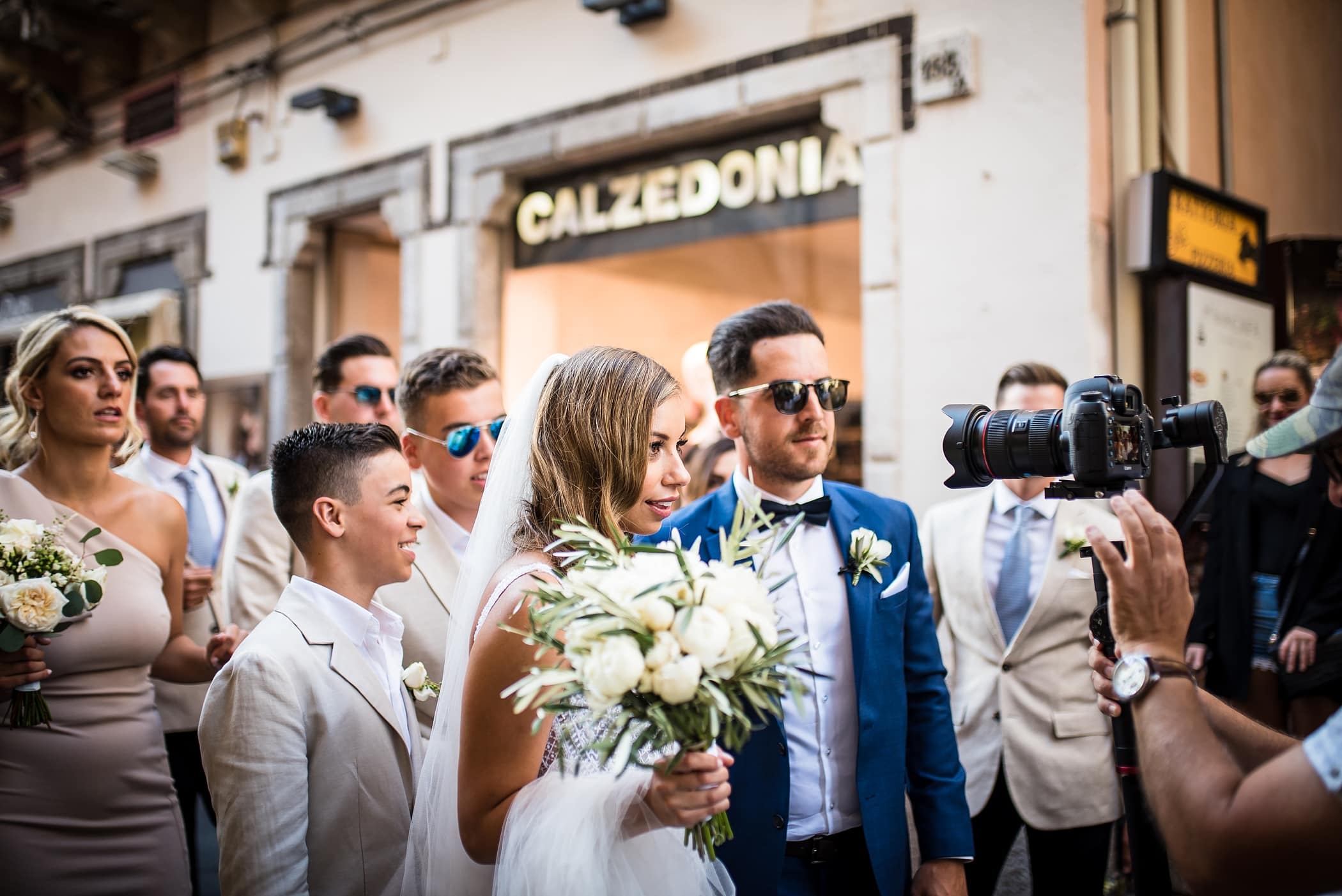 Just starting out in wedding photography, and don’t have a clue yet on how to behave and present yourself at weddings? Or maybe you’ve been around the block in wedding photography, but you’re still unsure of yourself in certain situations? In this article we’ll advise on how to navigate some of the traps that might await you over the course of a wedding day. We’ll also give you a few tips to make your work easier if you you’re serious about photographing weddings.

We’ll look one by one at the following questions:

We all have some idea of what’s appropriate attire when you’re at a wedding as a guest. But what should you wear when you’re going there to photograph it? It depends on the style of the wedding, but the typical assumption is that you as the photographer should fit in among everyone else.

Meanwhile this also has to fit with the fact that you need to feel comfortable in your chosen outfit all day long. There are some weddings where you can even take the liberty of wearing jeans (say, a Western-themed wedding), but elsewhere you won’t be able to get by without a suit or some other relatively formal alternative.

In my view (and that of some of my male colleagues), we women have things a bit easier when it comes to clothing here. The ladies have a much broader selection, whether that means formal pants with a blouse, or a skirt, or a summer dress. As far as shoes go, for both sexes, these need to be comfortable above all, so that you can hold up in them all day without problems.

Other women in wedding photography will surely agree with me that high heels are not exactly a great option. But you can feel free to choose more elegant footwear for the ceremony and banquet and then switch into more comfortable footwear later. There’s also no harm in packing a change of clothes in the car just in case you unexpectedly get wet or dirty.

Introduce Yourself to the Guests

If you don’t happen to be photographing your friends’ wedding, then you probably have only met the newlyweds themselves so far. But it’s good to know which parents “belong” to whom and who the the witnesses and siblings—and potentially any other VIPs—are. It’s polite to greet them and introduce yourself to them.

And it’s likewise appropriate to introduce yourself to the marriage officiant and reach any needed agreements with them surrounding your photography. For a church ceremony especially, you can’t go wrong by agreeing with the clergyman in advance about where you can operate and when you should and shouldn’t shoot. And that remains true even if you’ve been photographing weddings a long time and you’ve never had trouble with anyone.

Likewise it’s quite fine to start your communication with the staff at the wedding banquet site the moment you arrive there. They can then be very helpful in terms of providing details—where the cake-cutting will happen and so on.

How Formal Should You Be?

Do you tend to speak fairly informally with newlyweds who are around your age or younger? Or do you keep it formal with everyone? It’s hard to say which is better or more correct. There are photographers who work best when they can loosen up with their clients and use that to break down the distance between them.

Then there are others who are professionals through and through, who keep it formal with absolutely everyone, and yet their entire communication and approach feel friendly all the same. Advocates of the first option often state that it’s better because it loosens up the couple a little, and then it’s easier to work with them. Fans of formality are convinced that this healthy distance is better, and that when there’s a large age difference between the pair and the photographer, it’s often wiser. So there’s no one clear answer on what’s better; in any case, it always depends on your assessment of a given situation.

Making Sure to Catch the Moment

If you’re just starting out in wedding photography, then you’ve likely already experienced the situation of missing an important moment and then having it missing from your photo set. How do you prepare so that you can avoid these same mistakes next time?

If for example you don’t catch a good shot of the newlyweds’ first kiss, there’s still a way to rescue the situation. But you need to act fast and intervene with the magic words “one more time, please.”

Help also often comes from a watchful clerk or priest who immediately urges the newlyweds to kiss again—and disaster is averted. You can sometimes also prevent disasters by agreeing in advance with the newlyweds to have them extend the kiss. But it’s not certain they’ll remember their promise in the heat of the moment.

Speaking of which, there are a number of moments that usually need to be planned with a view to the photographer—the cake-cutting, any wedding customs where you live, etc. These moments are usually under the photographer’s or cameraman’s direction, to ensure they get the best possible pictures. In any case, the photographer shouldn’t be entirely the “director of the whole wedding day,” but more someone acting naturally and watching the events around them with a camera in hand.

How to Behave During the Ceremony

No matter whether the ceremony is in a church or a courthouse, you should stay low-key and avoid interrupting the proceedings. If it’s in a church, wait for one of the times when a song is being sung. Songs are the ideal time for taking pictures, hunting through your bag for a second lens, or moving to the other side of the room, because your steps and sounds won’t be distracting.

Some priests don’t like it when you take pictures during a sermon or Bible reading, and all the less (at a Catholic wedding) when they’re elevating the bread and wine. Whatever you do, never move around in the space behind the clergyman. And as mentioned above, for any pictures involving the officiant, it’s good to agree in advance.

Unlike church weddings, courtroom weddings can be as short as just ten minutes, so you need to be able to take all your pictures in a much shorter time. So there isn’t as much time for moving around, but you do at least have far more space.

Things become a bit less optimistic, though, when the wedding hall is cramped or has a creaky wooden floor that makes every movement bring a risk of interrupting the ceremony. On a brighter note, a cooperative officiant will often set aside a moment for you during the exchanging of the rings and the first kiss, giving you far better shots.

When the Guests Get Obnoxious

If there’s a guest with a camera or phone in their hands who’s getting into the shot, ask them to step aside. If that doesn’t help and they ignore you, or there’s no time to reach an agreement, sometimes there’s simply no other option than to push them aside.

Don’t forget that you’ve taken on the responsibility for delivering well-done work, and if a key shot is marred by some old uncle, the fault for that is on you. As for guests with cameras, ideally you’ll want to come to an agreement with the couple before the wedding, and then watch over the rest of the matter during the wedding day.

You and the Cameraman

If you’re photographing a wedding while a cameraman is filming it, and the two of you aren’t an established team, communicate with them right from the start. Both of you are primarily just aiming to do your job in peace and trouble-free. At a wedding, there’s no room for any conflicts, so ideally the two of you will reach an agreement as adults to stay out of each other’s shots and keep an eye on each other. You don’t want to have the cameraman in the background of your pictures, and they likewise don’t want to have you in their video.

It’s good to know before the wedding whether a cameraman will be present too, so that you can then adjust the schedule for couple shots accordingly. After all, both of you are going to want enough time with the couples. Speaking of which, if the two of you get along well, the newlyweds will be much more at ease during the video and camera work.

Food and Alcohol During During the Big Day

It’s always good to clarify with the couple what their lunch plans are. Photographers are only human, and nobody can work all day without food and drink. A backup baguette from the gas station “warmed up” in your car throughout a hot summer day probably won’t be the ideal solution.

If you ask the couple directly if they’ve thought about you in their lunch plans, believe me, the chances are minimal they’ll say no. What’s actually more likely is that you’ll be stuffed and will find yourself forcing down hunks of cake just to avoid offending anyone. If it does happen that you’re not wanted at the banquet table, work out a break time so you can spend it on taking care of your own lunch. It’s always best to have everything clear in this area before the wedding, so you can work things out accordingly.

As far as alcohol consumption goes, I’d recommend caution. The photographer shouldn’t be drunk out of their senses, if only because that would ruin their shots. Many photographers refuse all alcohol whatsoever during a wedding, arguing that it’s always unprofessional. However, wedding guests are often of another opinion, cajoling the photographer to have “at least one” with them.

But any alcohol in your blood is a heavy burden indeed if you have to switch locations over the course of the day, for example for the couples shots, because you’ll be unable to drive, and substitute drivers won’t always be available. If you’re photographing the wedding of people you know, then of course after a certain point, once you’re officially called off of work, you can put down the camera and feel free to have fun with everyone else, even all night if you want to. Your stance towards this issue is up to you, but it’s important to know your limits.

Interested in wedding photography? Then you’ll definitely enjoy the other articles we’ve written on the subject:

7 Situations Wedding Photographers Have to Handle