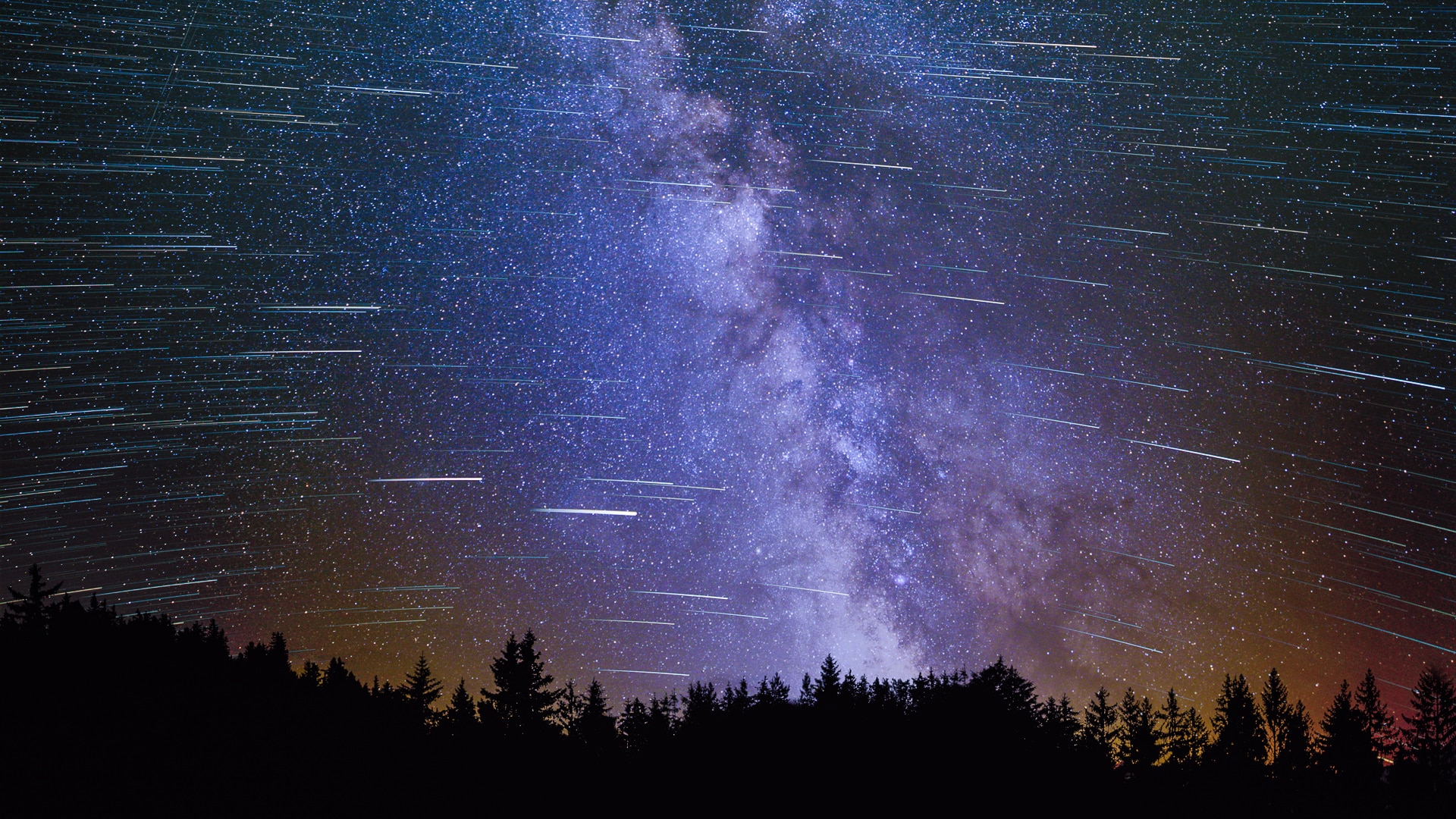 There are those shots that force you to go out into the field at times when others wouldn’t even consider it. There are other shots that require some planning and others where post-processing is critical. This particular photograph encompasses a bit of each of these types of photos. For this reason, I’d like to share the story of how it came to be.

The image I’m referring to was taken in portrait orientation, so it didn’t fit as the cover photo for this article, so here it is in its original aspect ratio:

The secret to how it’s done

Simply put, it involves a unique type of astrophotography that combines two techniques.

The first technique combines, or stacks, the images together, highlighting the stars’ trajectory. The second also stacks everything together, but first shifts each image so that the stars are evenly aligned over one another. It averages the result, decreasing noise and giving us a sharp, high-quality picture.

After combining the results of these two techniques, the final result is a beautifully rendered picture of the Milky Way with stars trailing across it.

These pictures were taken during a “vacation” in the Jeseniky Mountains of the Czech Republic. I couldn’t resist the low level of light pollution and was sneaking out each night to take pictures.

Locations with low levels of light pollution are ideal, but even with less-than-ideal conditions closer to big cities, you can do astrophotography. However, it is best to have the camera turned away from where the most glare is found above the horizon. You can research where and when the Milky Way will be found beforehand as well as its level of visibility by using a number of apps or websites. A handy interactive map of the night sky can be found on the Stellarium website.

Another obvious requirement for your astro shot is a clear sky.

We ended up in the middle of a harvested field several hundred meters from town. But even here, there were several light sources that could have cast glare on my otherwise dark photos and lowered the contrast. I tried to find a position where at least the strongest sources of light were blocked by the trees as much as possible.

In this case, I took 126 shots over the course of a half hour. All images were taken with the following settings: 16mm focal length, f/2.8 aperture, 1600 ISO, and 10-second shutter speed.

If you were to use a telephoto lens, you would get a relatively short shutter speed, around one second. With a self-timer that attempts to regularly trigger the shutter, it may result in non-shooting time that is longer than the time registered in the images. This can be a problem when stacking the images as not all software can handle closing the resulting gaps in the stars’ movement.

In these types of situations, I use a remote shutter release cable with the option to lock the shutter button in the pressed position. It then takes one picture after another on its own at maximum speed and I can be passing the time looking at my phone. You just have to be careful that the use of a remote shutter doesn’t cause vibrations (from the movement of the mirror or shutter) that would then blur the images.

Single source images usually end up looking quite dull. This picture is purposely dark so as to not overexpose the stars.

There is specialized software for processing astrophotography. The software does the majority of the work for you. I’ve tried several of them and find that many of their functions overlap. In this case, I used two: Sequator and StarStaX.

Sequator can align the position of the stars well and handle trees or houses in the foreground. However, their shape must be roughly sketched by the user.

On the other hand, StarStaX excels in its ability to join star trails. It can also fill in the gaps to some extent and has Comet mode, which makes the star trails not appear as solid lines, but rather fade out gradually as if they were the tail of a comet, which I find more effective.

After using Sequator, the resulting image is similar to the source images, but with significantly less noise. Now we can experiment with applying curves in post-processing in order to brighten it:

The bottom half still has too much light, so I used additional curves to reduce it. This time, the curves are limited to the bottom half using a mask that transitions upwards gradually into nothingness.

I replaced this layer with the image from StarStaX, i.e. the elongated stars. I set the layer mode to lighten to only show the light parts and ensure the dark sky didn’t cover the previous layer.

This looks like a lot of manual work, but fortunately there’s another trick we can use. We automatically select all areas with a specific brightness level from the bottommost layer, which has a sharp image of the Milky Way. Then we expand the selection by a few pixels to the sides and automatically add the appropriate feature to the mask that’s been created. This will cover up the overly bright stars with the surrounding cosmos. We’ve now managed to find a relatively quick solution to a complicated problem:

There is just one remaining final touch. The pictures were taken in strong wind, so even the trees in the distance are blurry. The solution was to use other trees from several unrelated photos. Using trees of approximately the same size is sufficient. They can even have been taken during the day, especially if their silhouette stands out against a bright sky.

Similarly to making a mask from the overly bright stars, then this time a mask is made from the dark trees. For the stars photo, only a black brush will be used so that the mask is painted over in the right places. It’s the equivalent of using a stencil over which you spray a desired shape.

As you can see, there are plenty of creative options for working with a photograph of the night sky. These options can certainly make a relatively dull shot go far. Of course, the final result will never compare to that of a professional or even some amateur astrophotographers, but you can do it all on your own and without any extra equipment.  All you need is your camera, some additional software, and plenty of time for experimenting.

Night-sky Photos: 7 Edits (+1 More) That Will Definitely Spice Them Up