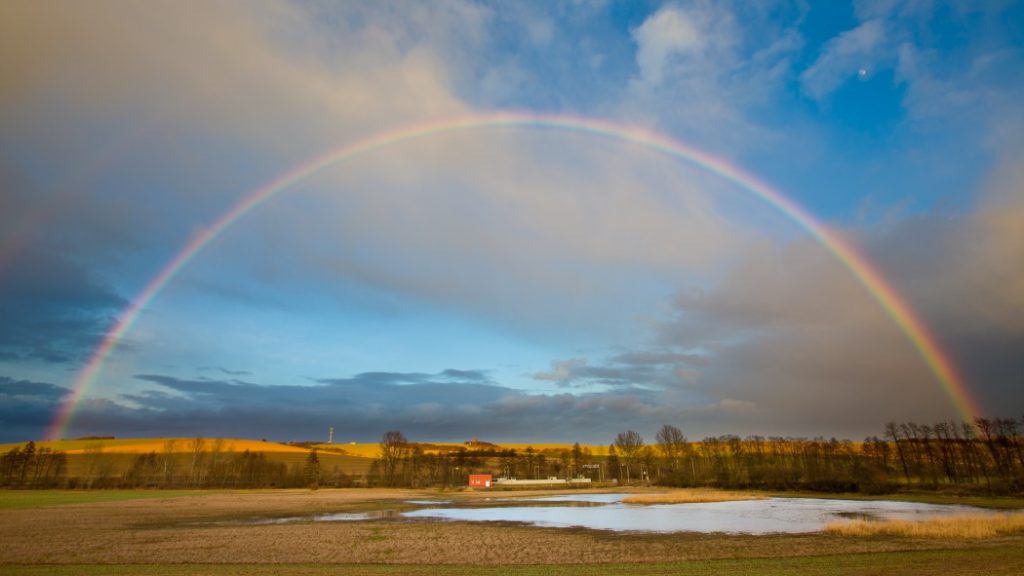 Nature’s theater above us is… mesmerizing. That’s why skyscapes are such a common part of landscapes and cityscapes. Sunsets, sunrises, storm clouds, rainbows. Moments that may never be repeated. Don’t miss your chance at a great photo—learn to get the maximum out of outdoor scenes!

I wrote a few words on sky photography in my article on silhouettes. But depicting the sky against the light, with a black-outlined landscape, is only one way to go. In many cases you’ll want to show details of that landscape, to supplement the sky and create a holistic picture of the environment.

Anyone holding a camera the first time (today it’s more likely a phone) and trying to capture a landscape will automatically point at the horizon and click. That gives a picture like this:

This photo is cut in two, leaving you unsure which half to focus on. Much better than this “approach” is to stop and think: which part of the scene is more interesting? Then give that part more space.

The Golden Crop rule, or more precisely the Rule of Thirds, states that a third of the photo should be ground and two thirds sky, pushing the horizon downwards. Or not. The rule can also be used vice-versa, with ground in two-thirds of the photo and just one third made of sky, pushing the horizon upwards. But there’s no need to fear bolder compositions. For example in this photo, I devoted much more space to the sky:

The sky does not have to dominate a photo. If it’s interesting, then a small portion is enough to supplement the rest of the action well:

The Different Kinds of Sky

Sometimes you get to pick your day, other times you only have one chance—you’ll never be going back to the place again. But don’t panic; there’s nearly always something interesting to photograph.

As for the sky itself, it’s at its most boring when it’s one samey mass of clouds. That gives photos with one big mass of gray or white, and an utterly boring sky. This is perhaps the worst case for photography. Here the best solution is to leave as little sky in the picture as possible.

Nevertheless even a sky like this offers us evenly diffused light, enabling us to photograph certain objects and people without dramatic shadows. That opens up new photographic possibilities.

Just about all cloud conditions can be expressed in pictures in some way. My personal favorite is small, tattered clouds like in the Amsterdam photo above.

But the various other possibilities aren’t junk either—you just have to keep the different look in mind. Compare these two photos from Paris:

Although the cloudy version is higher-impact, the blank sky has its uses too—for example the top empty area can be filled with text like “Vacation 2015.” It’s basically a text area that doesn’t feel forced. That makes photos like these attractive for the advertising business, where empty space for text even has a name: “copy space.”

Timing is fundamental for all photography. The classic Golden Hour—the time around sunrise or sunset—is ideal. But there are big differences even within that hour. For comparison, take a look at these two panoramas, one taken a half-hour later than the other:

Even faster reactions are needed if you want to capture the sun just over the horizon. The following two photos were taken in an interval of sixty-five seconds:

It’s not easy to catch a rainbow: it’s hard to plan far in advance for this kind of event. While this also applies for other atmospheric events, a rainbow really does demand very precise conditions.

But certain laws of nature do apply. Rainbows appear when the sun shines after (or during) rain. And above all, you always see them in the opposite direction as the sun. So with a bit of luck, you can react a bit in advance to compose your photo.

So far I’ve had a half-success here, once again in Paris,where the rain had just stopped and sun had come out. I realized that I had a chance at a rainbow, but the Eiffel Tower was a bit in front of me and the rainbow would appear behind me.

So I quickly started off, nearly sprinted under the tower, and kept looking over my shoulder. The rainbow really did appear, but it was faint. (It was midsummer, but it was also after 9 PM.) I had to go another 500 meters, and when I did reach a spot where I had both the tower and the rainbow behind me, the rainbow was only partially visible:

The interplay of earth and sky can also be compelling. Cloudy mountains and steamy forests are photogenic, so definitely don’t avoid them. In fact in situations like these, consider telephoto focuses instead of ultra-wide.

You can also include man-made objects, which even at their most momentous are small compared to the caprices of the sky:

You may notice that the focus is the full frame equivalent of 400 mm, which means that in reality these pylons are very far away from the photographer, and normally would be invisible to the naked eye. But they look good here! So actively watch the edges of the clouds for any objects that are potentially interesting.

Just as with silhouettes, here too you can later adjust contrast and saturation to your heart’s delight on a computer for a higher-impact photo. If the sky is very light, then the best solution is to darken this part of the photo or use gradient filters during your shoot.

Polarizing filters are also quite practical, but you can get by without them, and most pictures here were taken without filters.

In any case don’t be afraid to experiment, and if a sky catches your eye, then make sure to photograph it. A sky like that is unique—there will never again be one exactly like it.