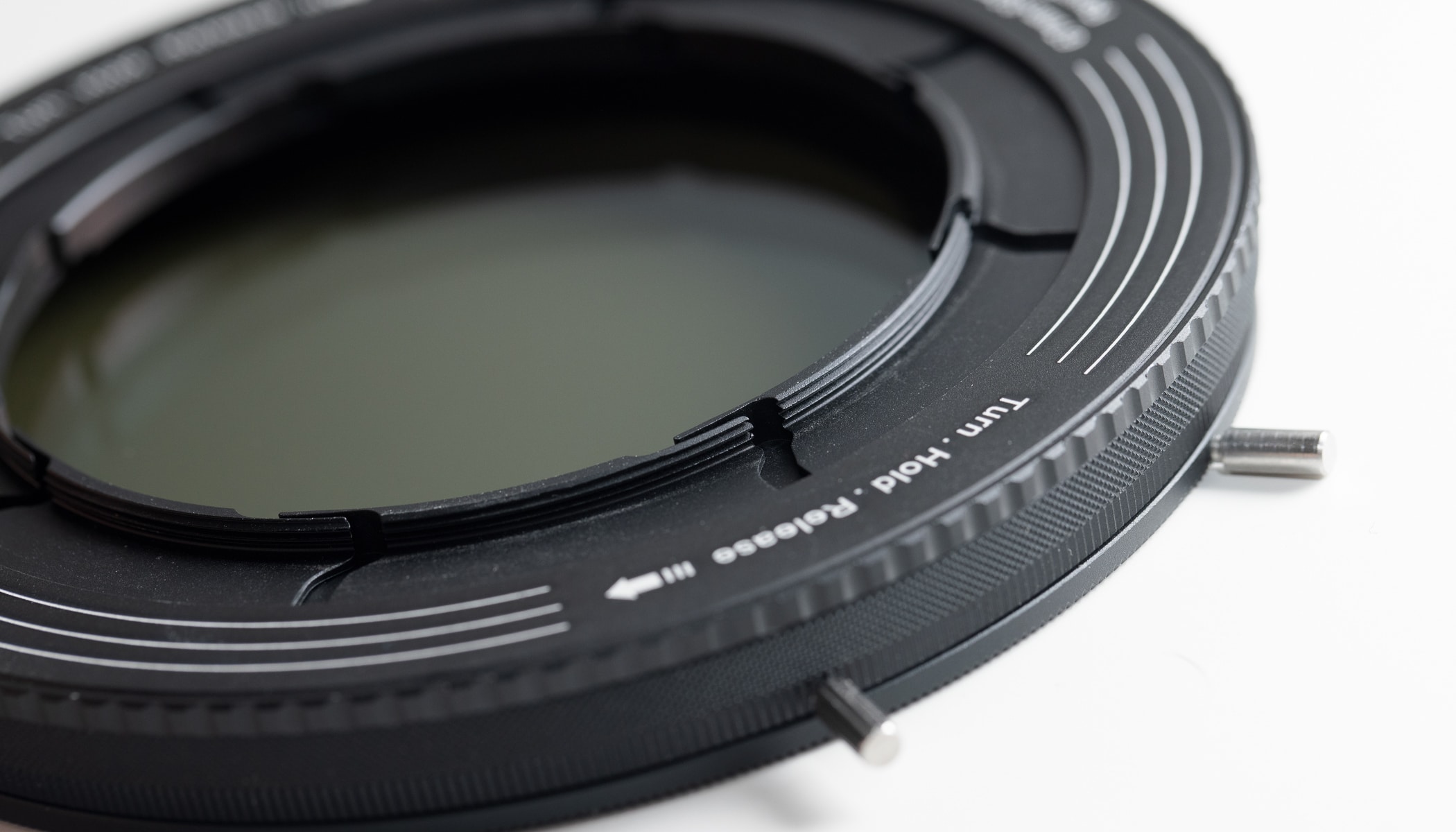 You may already own a polarizing filter or are considering buying one. Perhaps you’re considering a neutral-density (ND) filter too. But won’t changing out each filter and worrying about different lens sizes be a huge hassle? A creative solution to this is the universal Revoring. The Revoring combines both filters in one.

Even in the age of digital photography, certain glass filters are difficult to replace. These include the classic polarizing filter, which removes glare, and the neutral-density (ND) filter, which can prolong exposure.

A longer exposure time may sound unnecessary, but it is precisely what allows us to capture ethereal photos with blurry ocean waves or dramatic cloud movement. ND filters are also used for technical reasons for outdoor shooting with a flash and fast lens. Due to X-sync speed, it’s necessary to prolong exposure time from, such as 1/4000s to 1/200s.

When I’m out hiking, I usually carry a polarizing and variable ND filter. While the variable ND filter doesn’t block as much light as some more powerful ND filters, the amount of light it blocks is adjustable so it can be useful in many situations.

As I gradually expanded my photography gear, I was able to get my hands on both filters in two different sizes, 77mm and 82mm. So you don’t have to constantly reshuffle them from lens to lens, I carry both sizes, so a total of four filters. The weight of four filters is not small, so both the weight and volume of the box with four filters is something you should plan for.

The Revoring presents a solution to this problem because it combines both types of filters in one. There are similar hybrid products out there, but this is the only one that can be quickly attached to different sized filter threads.

I have written this article from the perspective of an ordinary user who purchased the Revoring filter a while back through Kickstarter. Production is just gaining momentum, so at the time of writing, March 2021, the Revoring is not available for regular sale in the Czech Republic. Rings from other manufacturers that fit 67mm and 82mm retail at around $200. While that’s quite expensive, an ordinary variable ND filter in a large size can be costly as well. For example, my Heliopan VariND 82mm cost me around $250 and for some unknown reason, is even more expensive at the moment.

It depends on the quality of the filter, but the Revoring ends up being comparable in price or cheaper than a set of 82mm polarizing and variable ND filters. The only exception is the K&F Concept variable ND filter which is suspiciously cheap (though I haven’t yet had the chance to test out its quality).

The Revoring itself weighs 137g, or 208g with its metal caps. My Heliopan VariND and Hoya CPL HD, both 82mm, weigh a total of 161g without a case. Just for interest’s sake, my set of four ND and CPL filters weighs exactly 300g or 336g with my lightweight, homemade box (durable, but too unsightly to show here).

When storing, you must account for the larger size of the new filter, which is 109mm not including the removable small clasps.

For this test and those that follow, I used a Canon R5 and compared images with no filter, with the Revoring, and with the 82mm Heliopan VariND.

To test sharpness, I took several test shots both indoors and outdoors with an ultra wide-angle lens followed by a long lens.

Even though it has a 45 megapixel sensor, I didn’t find any differences in sharpness in either the center or edges of the image. In my opinion, when it comes to sharpness, both filters are practically identical to the photo taken with no filter.

This was an artificial test shot that was taken using extreme lighting conditions with a bright light source. Under normal conditions, such as photographing against the sun, the glare would be more subdued and often more covered up by other things happening in the photo.

The first image was taken with no filter so we see the glare of the lens itself.

The second image was taken with the Revoring set to its minimum stop. The exposure has been adjusted to compensate for the filter’s light blocking.

And for comparison, the Heliopan VariND:

Some additional glare is visible, but nothing terrible. The result with the Revoring is actually better than with the Heliopan. In any case, this condition is workable and will depend more on how well you clean the filters. For the sake of comparison, I included a picture that was taken with no filter before I cleaned the dust off the lens. You can see why I need to wipe the dust off all the filters in such extremely bright settings. Otherwise, their quality hardly matters.

Since I was shooting with an ultra wide-angle lens, you can see the filter’s rim which also reflects light and other times causes vignetting. Once again, Revoring gets all the praise because it doesn’t interfere with the image as much as the Heliopan with its wider rim does. It appears that the manufacturer finally learned their lesson and Heliopan now sells a thinner version.

There is also visible tinting of the filters. The Revoring seems to tint pictures shades of yellow, while the Heliopan tints the picture green. In practice, this is not a major issue because everything will be corrected with different white balance settings.

Variable ND filters have one particular feature that appears when they are used in combination with wide-angle lenses. The more you reduce light, the more dark spots appear which connect to make a visible cross or X pattern, making the image unusable. So at wider focal lengths, a very drastic reduction of light cannot be used.

To the best of my knowledge, this is a common feature that all variable ND filters have.

We can see that the Revoring stops being usable at this focal length when the light is reduced by roughly 5-6EV (resulting in an approximately 50x darker image). It is far from the advertised values of 10EV, respectively 1000x darker. Nonetheless, this is something to be expected, and the Heliopan gives us the same values.

When using a telephoto lens, the situation is different. Even at full strength, there are no dark crosses:

Thanks to the telephoto lens, I was able to shoot with a 13-second exposure during the daytime. The exposure of the same scene without a filter ended up being 1/50second. It was roughly 650x darker, which corresponds to an EV of almost 9.5.

Again, I tried a second variable ND filter and got almost identical results. Nevertheless, the Heliopan, unlike practically all other variable ND filters, ignores the polarizing intake of light, so the image may look a bit different. Therefore, it cannot be used as a polarizing filter, which can be both an advantage and disadvantage.

The combination of two filters in one is great, as is Revoring’s ability to lock in quickly and fit different-sized filter threads.

The Revoring quickly locks into the lens and can be removed just as fast, though it does require a bit of coordination and a firm grip. You have to grasp and turn its two spring-loaded rings towards yourself. You can’t do this using only one hand, so if your camera is on a tripod at the moment, you’re good to go. But if not, you’ll need another hand for holding the camera, or you’ll be in a series of awkward movements that will look anything but graceful.

Add in struggling with the special metal caps. They may look identical, but to add to the confusion, they are attached completely differently. Without the help of a tripod, get yourself ready for an interesting acrobatic one-person show. I personally don’t plan to use the Revoring caps and have made myself a homemade box instead.

On the other hand, the firm grip and dexterity required to remove the Revoring also means that I’m not afraid that it’ll get loose and fall off.

Its mechanical retracting blades make it seem more fragile than ordinary filters, so I’m interested to see how long it will last. However, my older filters are also showing signs of use and the glass is not as flawless as it used to be.

The marked stops on the Revoring are great and give you a realistic idea of light control, especially when compared to the Heliopan with twelve numbers that don’t really tell you much.

A product with plenty of potential

At this time, my experience with the Revoring is limited and I’ll know more after some years of use. However, for now, I can say that for when I go hiking, the Revoring has replaced my previous set of filters. In terms of quality, the filters were all comparable, which honestly surprised me. Also, I appreciate the small advantages in carrying and handling. I understand that others may prefer a different system, even the one I used previously, or a powerful square ND filter instead. The Revoring is just one of many solutions out there and it’s up to you which one you choose.