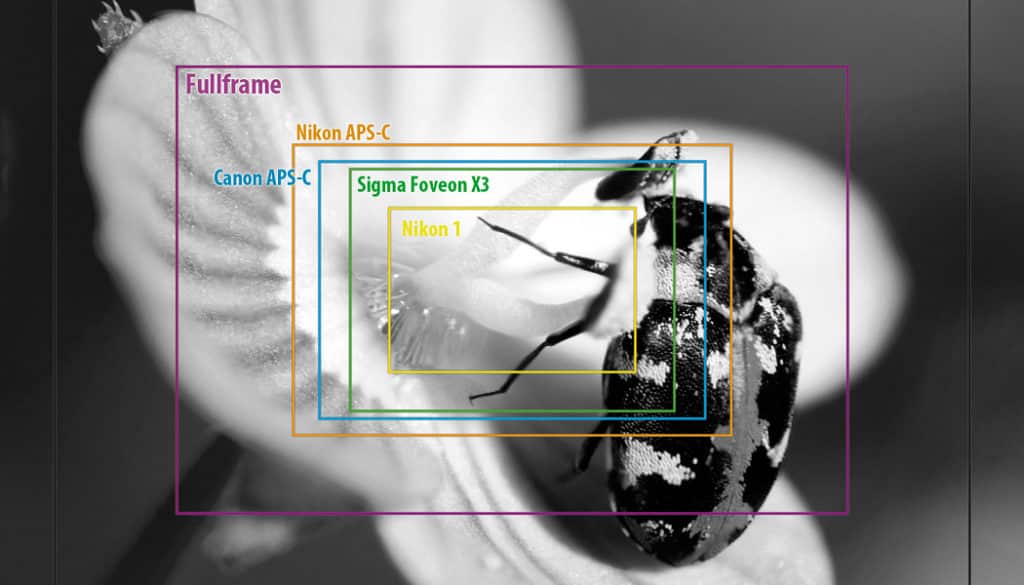 To properly describe the importance of crop factor, we’ll first need for you to know where it comes from and what aspects of your camera affect whether or not you need to care about it.

The first important concept related to crop factor is a camera’s chip—also called its sensor—which is its most important component (except of course for the lens).

If you’re an old-timer, surely you remember those little film rolls, each one containing a filmstrip that you stuck into the camera and had to make absolutely sure not to pull out until it was fully used up. That was “35mm film,” which was the most widely used medium for recording photographs.  It was generally the first thing you thought of when you heard the word “film.”

Each frame of it was 24×36 mm, and that size became a basic concept for today’s digital photography. Today the term “full-frame” indicates a camera whose sensor chip size matches that old analog film size.

So if you own a full-frame digital camera, then the size of the chip inside it—the chip onto which images fall—matches the size of those old analog film frames. A full-frame camera can cost some real money. But when you’re using one, you don’t have to worry about crop factor, because crop factor is calculated relative to full-frame.

Another important concept that you’ll surely encounter in connection with crop factor is focal length. That’s because this is precisely the property that changes with focal length.

To put it technically: “Crop factor is the coefficient for calculating the equivalent focal length you would have on a full-frame DSLR.”

The first time I read that sentence, I wanted to immediately sell my camera and start coloring in anti-stress mandalas instead. So let’s go through those terms one by one:

A coefficient is a number that some other number is divided or multiplied by. Here the crop factor is that coefficient.

The focal length is the distance from the center of the lens out to the plane onto which the rays that it concentrates are focused. This distance is given in mm.

A full-frame DSLR is a camera with a sensor size of 24×36 mm—the same size as analog film.

To give you a better idea, I’m including a diagram to illustrate focal length. But note that it really is for illustration only. The lenses in every lens assembly variously refract and adjust the image—but the basic principle will look like what you see here.

One other term you’ll need to know, a camera’s angle of view, is directly related to focal length. It indicates how much of a photographed subject (and scene) fits into a photo. Here the rule is that the greater the focal length, the smaller the lens’s angle of view, and the more you’re zooming in on your subject.

So with a lens that has an 85 mm focal length, you take in less of the scene than with a 50 mm lens.

Cheap cameras, no matter whether they’re DSLRs or compacts, generally have small sensors. And that’s where crop factor comes into play. A smaller camera sensor simply takes in less of the scene that’s brought in by the lens.

Crop factor thus describes how much smaller the sensor is than an analog film frame, i.e. a full-frame sensor, or in other words, how much is “cropped away.”

So a full-frame camera has a crop factor of 1. For smaller sensors, you need to multiple the focal-length value (e.g. 35) by the crop factor to get the 35mm-equivalent focal length for your camera. That’s why it’s important to know your crop factor.

You can generally find your lens’s focal length on its perimeter. For zoom lenses, several reference values are shown ranging from the wide end to the long end.

Note that for certain sensor types, the crop factor is rounded. Also note that there isn’t just one “APS-C” standard; it varies among the different camera manufacturers.

In practice this means that while for a full-frame DSLR, a 50 mm lens will give you roughly the angle of view of a person’s eyes, for an APS-C sensor, you’ll need to use a 35 mm lens to get that same angle.

>> Sensor size is also important when you’re shopping for lenses. For more information, read our article Lens Basics—Choose the Right Lens for You.

A smaller sensor also means a lower price. The sensor is probably the most expensive thing in a camera body, and so the smaller it is, the less you pay.

When taking pictures at a distance, the smaller your sensor, the more the camera will zoom in on your subject. A small sensor like the APS-C will make a 200 mm lens act like a 320—and so it will zoom in more. So for example instead of a 500 mm lens, you’ll be able to make do with a 300 mm, which will save you money once again.

Smaller sensors unfortunately also mean lower picture quality, which can often be a fundamental argument for reaching deeper into your pocket during your camera purchase. However, if you buy an expensive camera, you’ll have to keep in mind that you’ll get larger picture files—that take up more disk space.

With a larger sensor it’s easier to get a deliberately low depth of field—the fabled “bokeh.” You can see this difference clearly in a photo from a phone or a compact camera with a sensor that’s only a few millimeters in size. This tends to give you pictures where everything is sharp from front to back. Unless, of course, your subject is just a few centimeters from your lens.

To close up, I’ve picked out a few cameras and listed their crop factors, so that you can feel for yourself how crop factor changes as your sensor size changes.

Good Photos Come from the Photographer, not the Camera

If you’ve just discovered that you’re not using the camera of your dreams, don’t worry. Your photos’ quality doesn’t only depend on your equipment. In fact, it primarily depends on your abilities and creativity. So pick up that camera and get out there shooting until you can add more to your pictures than any sensor ever could!