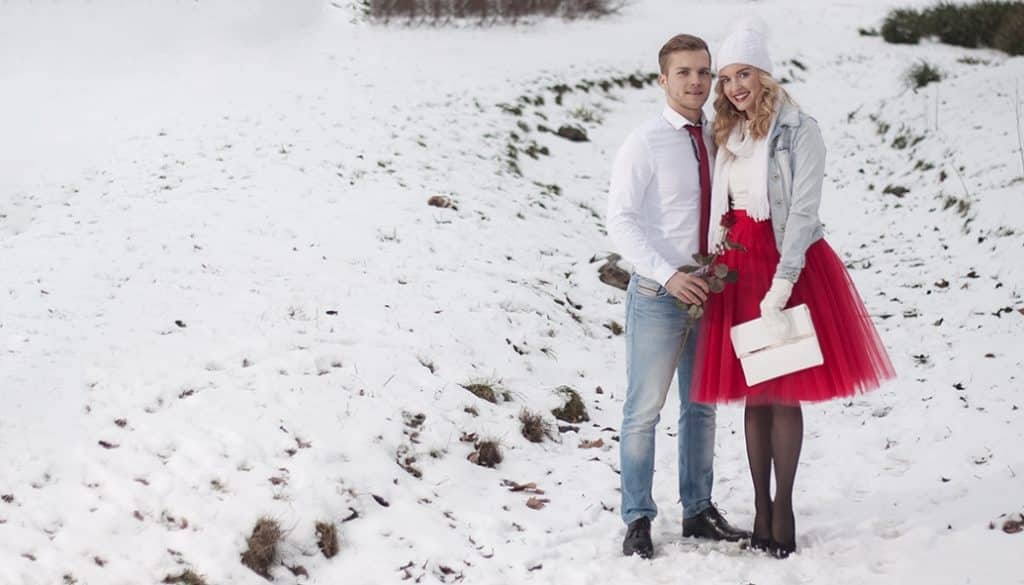 St. Valentine’s Day isn’t just great for business. It’s great for photographers too. So grab the opportunity and take an original Valentine’s photo that’s sure to please lovers everywhere.

You can also end up in a situation where you’re not actually photographing actual lovers, but instead taking a commercial photo where the “couple” will be played by professionals who are seeing each other for the first time. In this case you’ll want to really make sure that the pictures don’t look too artificial. On the other hand, professionals have plenty of experience with posing and know how to be photographed, so the fact that it’s not a real couple isn’t necessarily a problem.

Before you start taking pictures, reach an agreement with your couple on how the photos should look and what style they prefer. Follow modern trends; don’t be afraid to advise your couple or think up custom photos for them. Use props too—but don’t overdo it.

You as the photographer can see the picture in the viewfinder, while the couple can’t. Don’t be afraid to tell them about your ideas or even physically demonstrate what you want from them. Communicate, act natural, and joke around—this will give you a more relaxed couple.

Red, the color of passion, is definitely a natural fit for photos about love. Choose in advance what you want to be red in the photo. The color red is usually placed in accessories—like clothing, lipstick, and props.

Don’t color parts of the photo red in post-editing—it won’t look good. Don’t suppress the reds in the photo via desaturation either.

Not even local desaturation—where you leave part of the picture red and the rest black-and-white—looks good. Instead, it looks cheap. If you do want to have a strong contrast in your picture, then aim to minimize the number of colors in most of the scene instead—e.g. mainly white or gray. And make the remainder bright red. The contrast of red with snow, for example, is very effective.

Take a Valentine’s photo is much like taking any other photo. However, couples play a large role in these photos, as do colors and various accessories and props. While shooting, just think about the essence of this lovers’ day—then ideas will come to you on their own.

Improve Your Family Pictures by Improving Your Dog Pictures

How To Train Your Photographer

Tips for Photographing the City