Does it sound crazy to you to use a black-and-white preview in your camera instead of color? Try it anyway. This preview will keep your eyes more focused on composition, making it easier for you to notice compositional flaws. That enables you to fix composition errors on the spot, instead of crying over your ruined pictures at home on your computer. 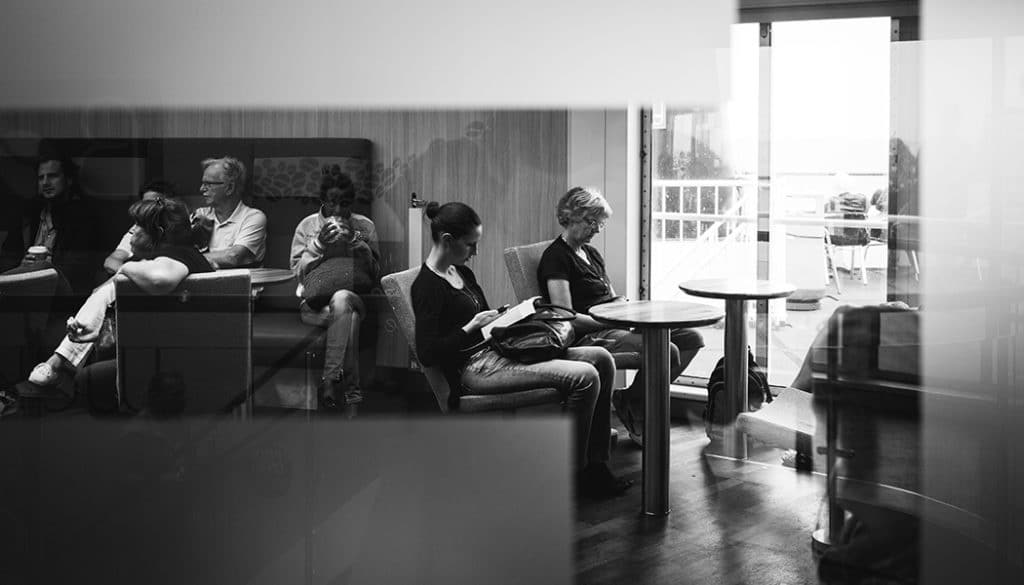 Colors, and especially clear and bright colors, naturally attract the human eye, and grab all attention for themselves. Then among all the glittering colors, you can easily lose your awareness of image composition. Black-and-white pictures, meanwhile, are largely about composition. So switching your world into black and white can change your photographic vision—how you see light, shapes, and structures. That can enable to see composition problems in your pictures right in the viewfinder. And you can do it without having to actually shoot to black and white. After that it’s easy to fix the problem on the spot.

If your camera enables it, turn on its black-and-white preview function. You’ll find it in the camera menu under a name like Picture Style, Picture Control, or similar—the exact name will depend on your camera type.

Choose whichever option corresponds to a B&W preview, and double-check that you are saving photos to RAW. 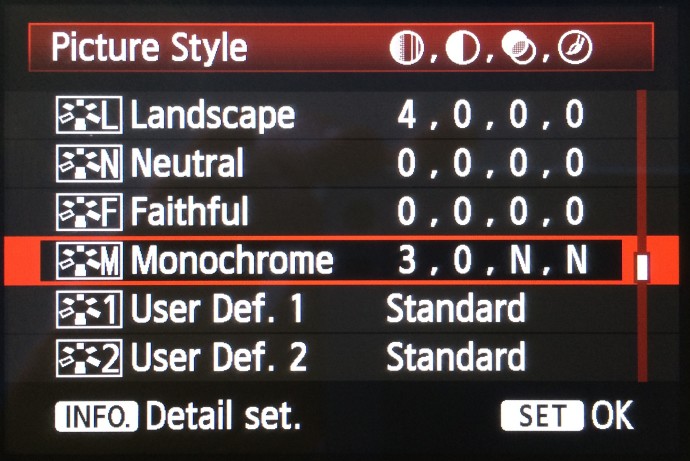 Turning on the B&W preview on Canon cameras.

Now when you turn on the live preview, the image on your camera’s LCD will display in black and white, and the picture’s post-shot preview will be black and white as well. But color information will still be saved to the actual pictures you take—to your RAW files. You can then open any photo in Zoner Photo Studio and work with it as a color photo, or even convert it to actual black and white.

Shooting via the live view is the most efficient for training composition, as you see the picture’s shades of gray in advance. But the post-shot view of the picture you’ve taken will also serve you well.

Spend a certain amount of time on shooting with the black-and-white view, during more than one photo shoot. Try shooting this way for a month or more. You’ll be training your eyes, just like runners train their muscles. You’ll see how you are slowly learning to see the world in a new way, and you may be surprised at how your pictures change. So what are all the areas where a black-and-white preview can help?

Flashy clothing or articles of clothing, scenes made up of many colored objects, light sources with differing color temperatures, differently-colored backgrounds… all this can create a veritable cacophony of colors in which it’s hard to orient your eyes. Highly visible colors grab your attention, leaving you no room to perceive the connections among the individual objects in a picture. The black-and-white preview will help you to suppress these distractions and concentrate solely on the subject itself and on how it fits into the picture overall. 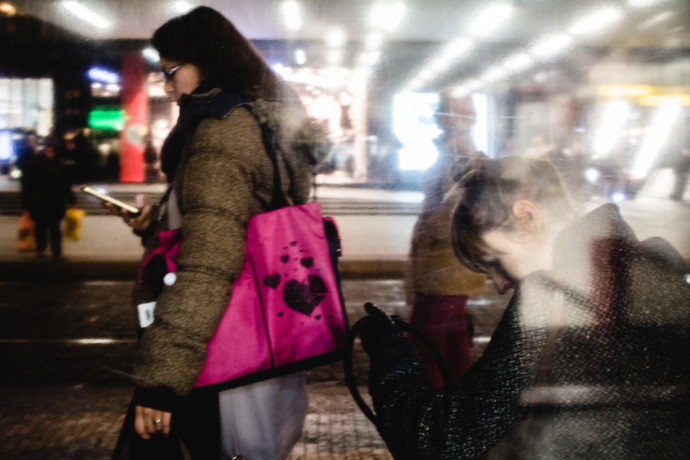 The handbag’s pink color makes it stand out so much that it’s hard to pull your eyes away from it. And if you escape that, then there’s the color-fragmented background. With this view of the picture, the woman in the photo’s right corner is almost unnoticeable. 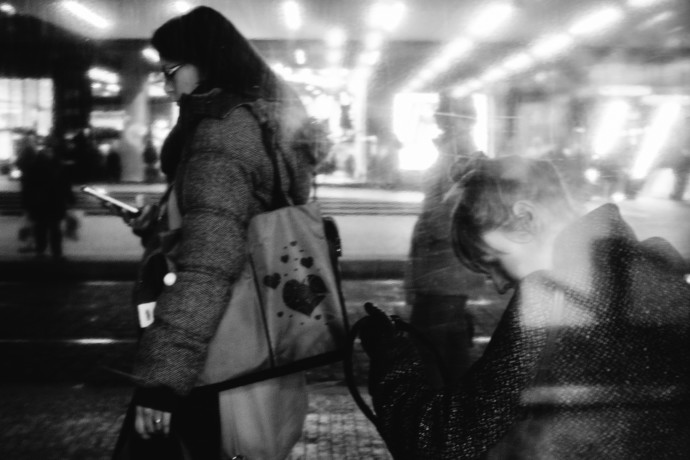 A black and white preview suppresses all the distracting swaths of color. That lets other things shine through: the line of lights from the shopping center, opposite to the line formed by the tilts of both women’s heads. This composition guides the viewer’s eyes from one woman to the other and doesn’t force them to wonder if the woman on the right is also searching for her phone like the one on the left.

Although you can’t really see the warmth of afternoon sunrays or the variety of a night sky’s tiny colored lights with a black-and-white preview, it gives you completely new possibilities for work with light. Concentrate on light’s direction and on the contrast it makes with shadow. Take notice of how rays of light influence the presentation of space and how they support the overall composition. 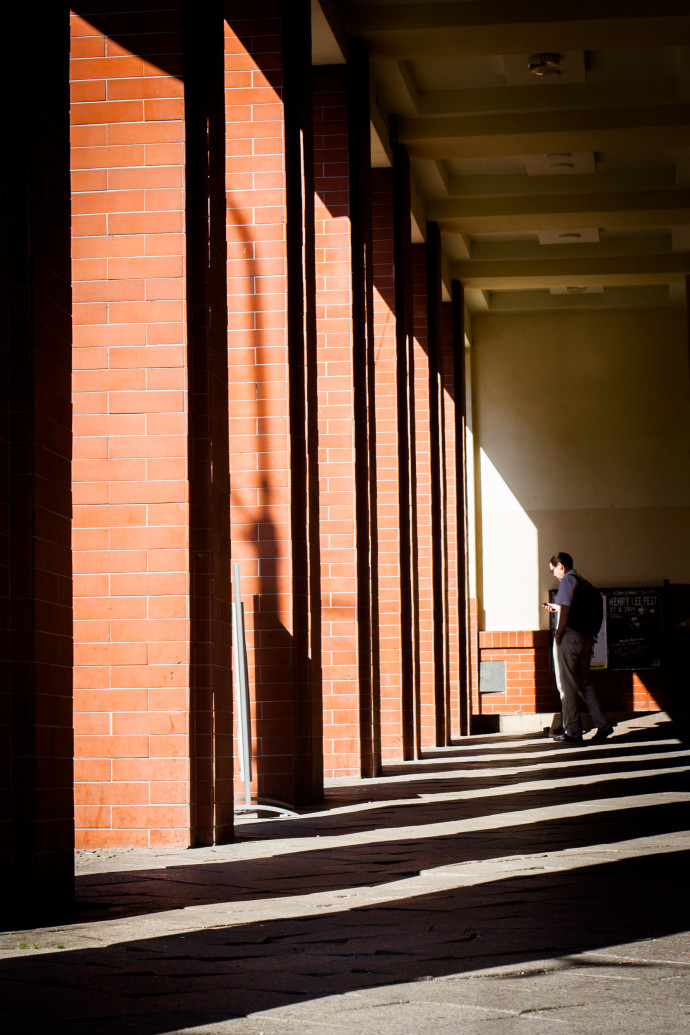 The reddened columns are separated, via their colors, from the grayish stripes of light breaking through onto the sidewalk. The yellow on the roof—even though it’s in shadow—is still visible enough to draw attention to itself, just like the man’s blue shirt. 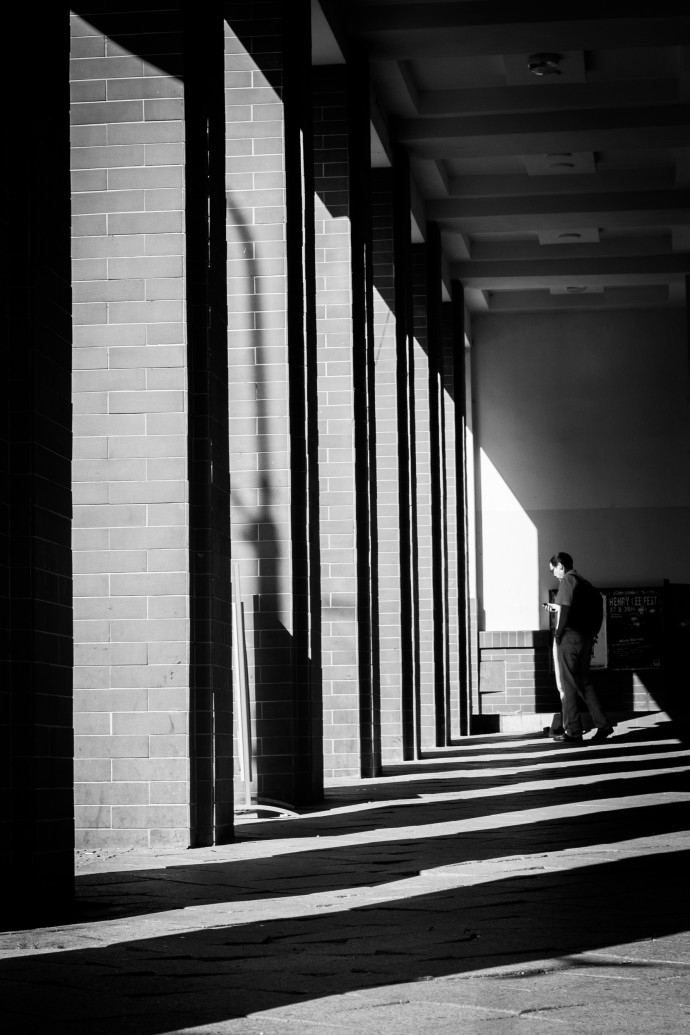 After visually removing the colors, you can see how the columns with light peering through them form concentric, compact triangles. They thereby give the picture depth and make it feel 3D. The figure in the picture visibly fits in the last triangle and supplements its edge.

When shooting with a black-and-white preview, you should also focus on the structures and patterns formed by various shapes. Notice the lines that lead your eye around the picture. The black-and-white presentation will increase their readability; they’ll practically pop out of the picture. Try to connect the lines and structures of various objects and hook photographed objects and persons into these structures. 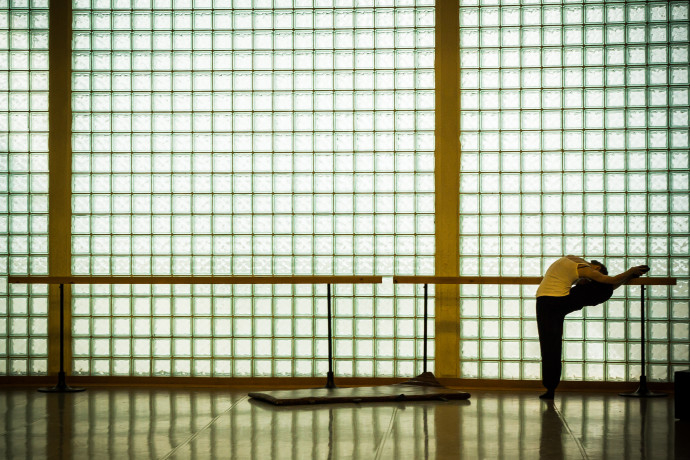 The dividing columns of the glass-block wall are an important element in the photo, and they throw shadows on both the dancer and the pattern created by the glass blocks themselves. 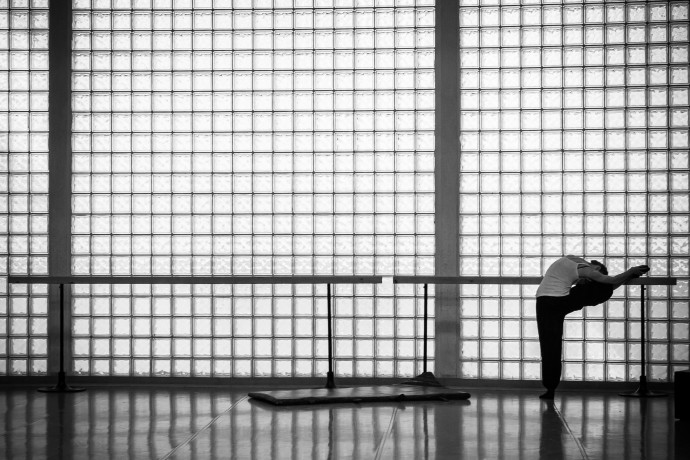 The B&W take has made the columns stand out less; they are now visually integrated into the glass-block structure. They form a single whole with it, just like the exercise railing. The human figure that is the photo’s main subject breaks up the structure via the lines of her body, and stands out better in the uncolored presentation.

Negative space is the part of the photo where “nothing’s happening.” It’s essentially the picture’s background. But don’t underestimate its role, because it can be very useful for separating a photographed object from its background. It can give a photograph depth and make it dynamic. When using a black-and-white preview, pay the most attention to the picture’s bright and dark parts and to their relationship. 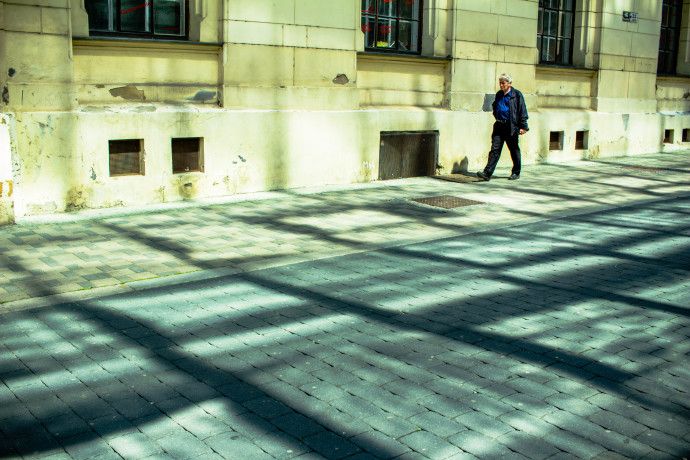 Even the small saturated blue area manages to draw attention to itself. The human figure melts into the sidewalk’s colors somewhat. 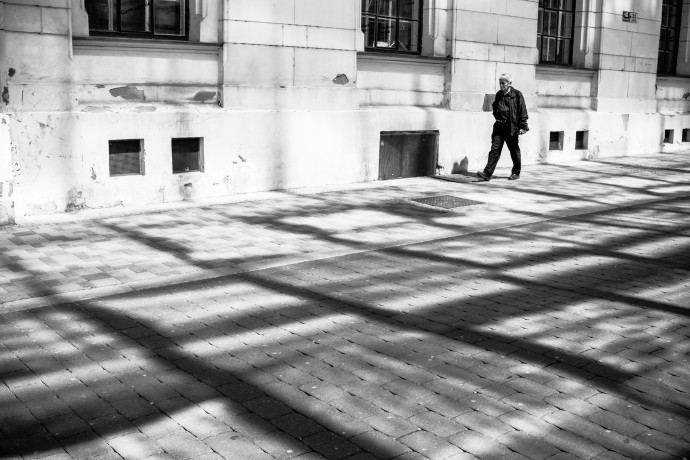 Get rid of the colors and voila, it’s like the person has been peeled out of the picture. This is helped by the contrast of the dark clothing and the brighter background. The line formed by the bases of the houses running parallel to the shadows on the sidewalk adds dynamics and a feeling of motion; its role becomes more important in black-and-white.

While reading this you may have gotten the impression that I’m promoting black-and-white photography as such. But I’m not, and even the preview shouldn’t always be black and white. Composition is not, of course, entirely independent of color, and there are topics where a color representation is critical. For example in photographs of a blooming springtime garden or of a autumn forest trail sprinkled with colored leaves, color is the central element. But often color can reduce our ability to perceive a photographed scene.

In black and white, it can be easier to concentrate on how objects are positioned, on their interrelationship, and on how they relate to their environment. If you get rid of distracting colors, then you can better follow how your picture respects basic compositional rules, including e.g. the golden crop.