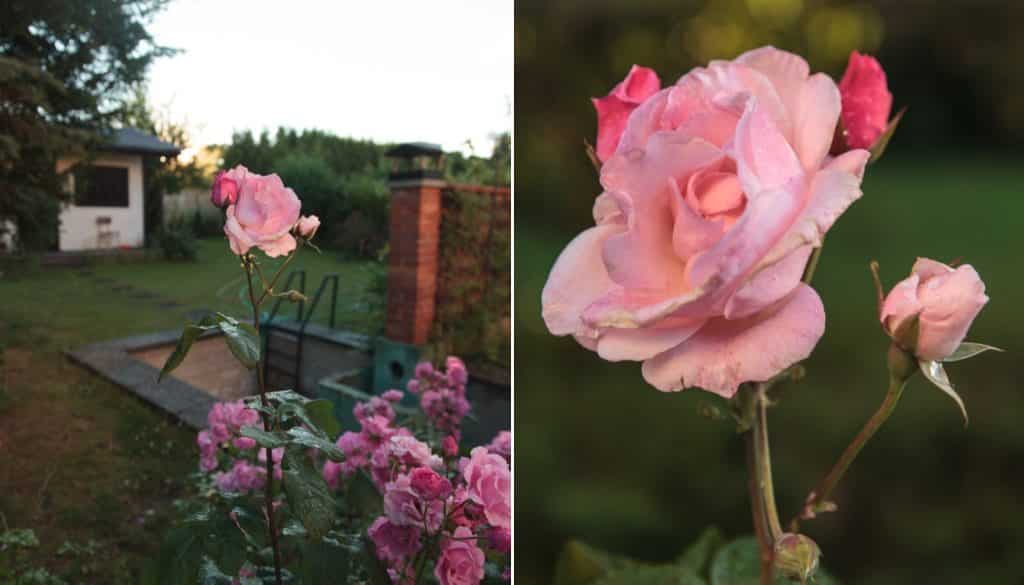 Be honest with yourself—do you try to capture too much at once in your photos? “Busy” pictures like these contain lots of things that can distract from your subject. Meanwhile, your subject ends up getting too little room in the shot. So in the end, even though the picture tries to say many things at once, in the end it tells your audience almost nothing.

All this is best summed up by a quote from famous war photographer Robert Capa: “If your pictures aren’t good enough, you’re not close enough.” This quote was originally intended for reportage photography. Looking at the photo, your audience should feel like they are directly a part of the events it portrays. But I think that this rule can be applied to other photographic genres as well.

Remember, your photograph should only contain what you’re trying to express. Everything else in the picture is excess and can only confuse your audience. When you’re shooting a portrait, it should fill up the whole picture—ideally against some kind of a neutral, undistracting background. A portrait photograph is about the person it portrays. Everything else in it is unessential. To remove the surroundings from a photo, use a long-focus lens (85 mm or more). 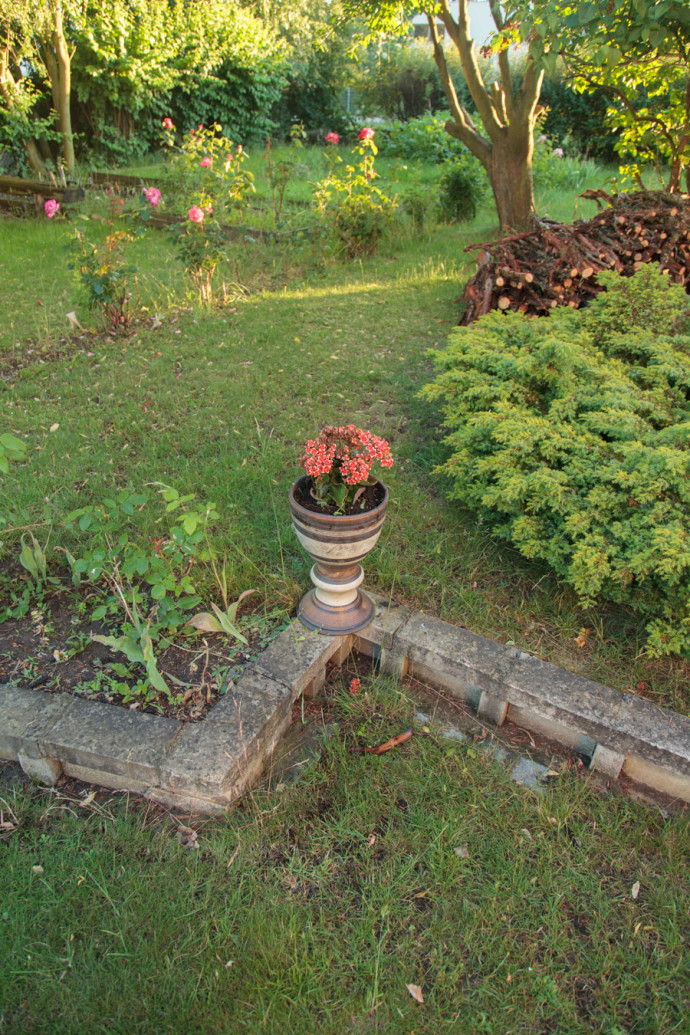 A classic beginner’s “snap.” The photo depicts a garden. In the middle of the scene there’s a flowerpot with a flower. Now, this photo can’t be about the garden—the top part of it is cut off insensitively, and the bottom half of the photo contains a number of boring green areas with nothing to say. The photo also isn’t about the flower in the pot, because the flower takes up only a few percent of its space.
Canon EOS 5D MkII, EF 24-105/4.0, 1/80 s, f/4, ISO 400, focus 24 mm 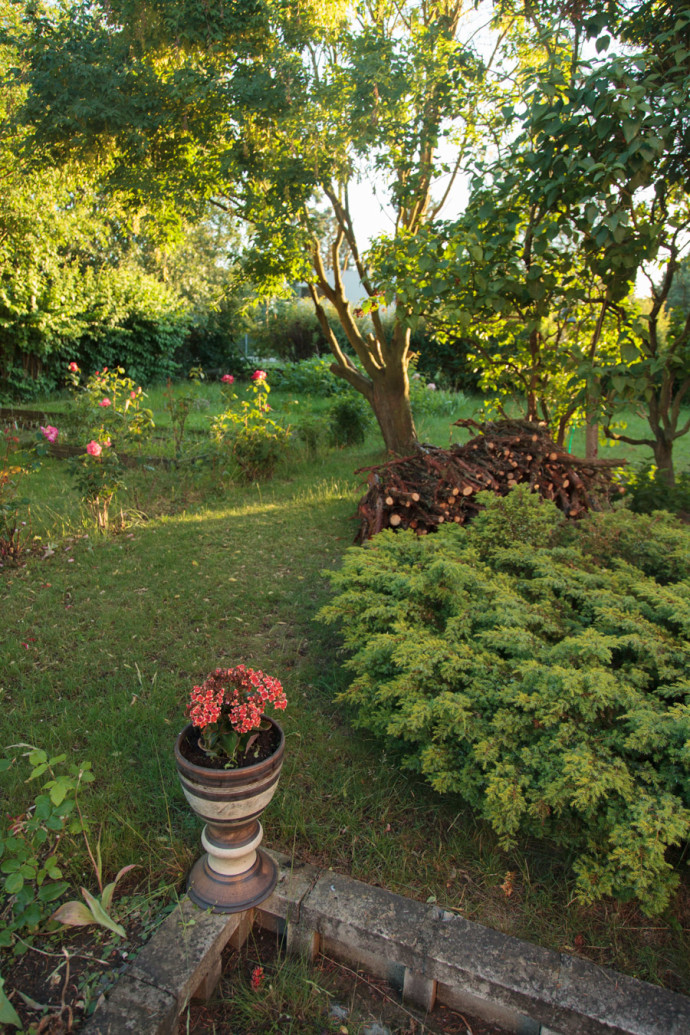 Just by recomposing the image, you get a better documentary picture of the garden. By moving the flowerpot to a golden-crop point, you can eliminate the busy bottom part of the picture and give the garden sufficient space. The picture’s overall composition is much more eye-pleasing now and no longer contains dead spots.
Canon EOS 5D MkII, EF 24-105/4.0, 1/100 s, f/4, ISO 400, focus 24 mm

A different situation appears when your picture is “about” a wide landscape. Here you’ll need to use a wide-angle lens (typically 24 mm or less). When using a lens with a short focal length like this to capture a wide landscape, a large amount of empty space will appear in the picture’s foreground. Because of this, you’ll want to occupy the foreground with some kind of interesting element that gives the photo space and depth and leads your audience’s eyes into the landscape. That way the photo will contain blank spaces, making it more attractive. 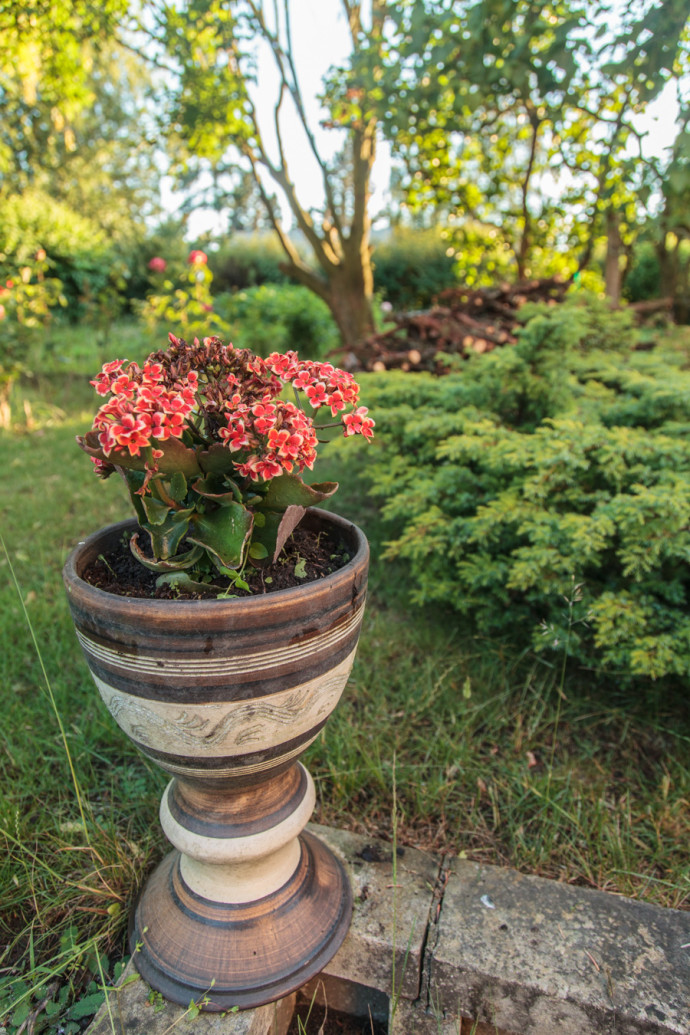 A more creative composition for capturing the garden. By shooting closer to the flowerpot, you emphasize it, so that it covers a much larger part of the picture, becoming its subject. Due to the short focal length used, the picture still also has enough space for a large part of the garden, which supplements the subject. The picture gives the viewer a clear idea of the environment, and thanks to the small f-number used, it’s also blurry enough to keep it from clashing with the main subject.
Canon EOS 5D MkII, EF 24-105/4.0, 1/80 s, f/4, ISO 400, focus 24 mm 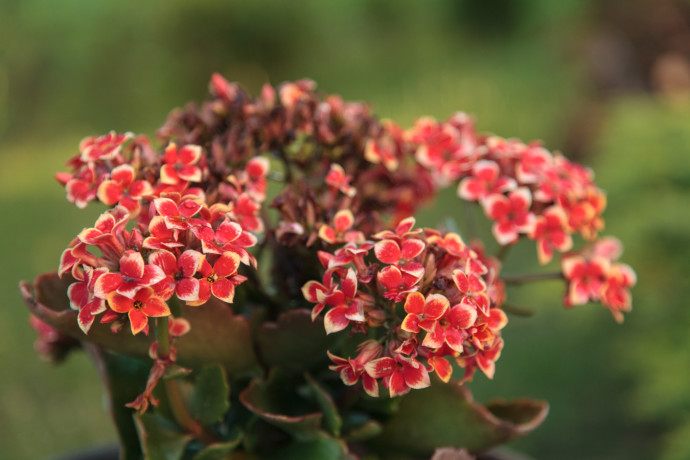 By increasing your focal length, we could shoot a close-up of the flower while still standing in the same spot. The flower now takes up a large part of the frame and is unambiguously the subject of the photo. The background is unidentifiable. Your audience may expect that the picture was taken somewhere outdoors, but they can’t be sure.
Canon EOS 5D MkII, EF 24-105/4.0, 1/100 s, f/4, ISO 400, focus 105 mm

Compose to Your Final Format

The final display size you plan for your photos should play a large role in your composition. For a portrait, you can expect that it will be displayed in a relatively small format, 30×20 cm or less, or as a picture on the wall that, though larger, will also be viewed from a larger distance. In that case, we want to fill up the whole frame. 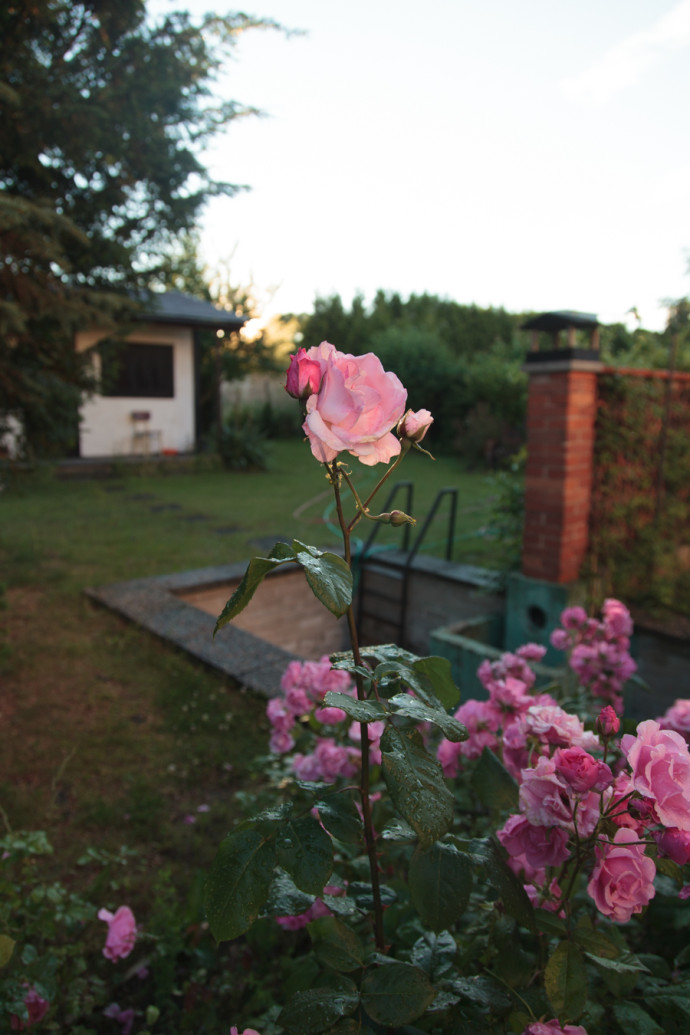 Another “snap.” This one tries to depict the whole flower. But the background is very distracting, and not just in terms of composition. There’s a lack of work with light; the dark subject is drowning against the light background.
Canon EOS 5D MkII, EF 24-105/4.0, 1/320 s, f/4, ISO 400, focus 24 mm

If, however, your intention is to create a photograph that you’ll be using as the wallpaper for a large wall, then filling the whole frame with a portrait will leave you with a photo that isn’t readable from a normal viewing distance. With such a large format, instead of a face, you can capture a whole person, and also position them within an interesting environment. 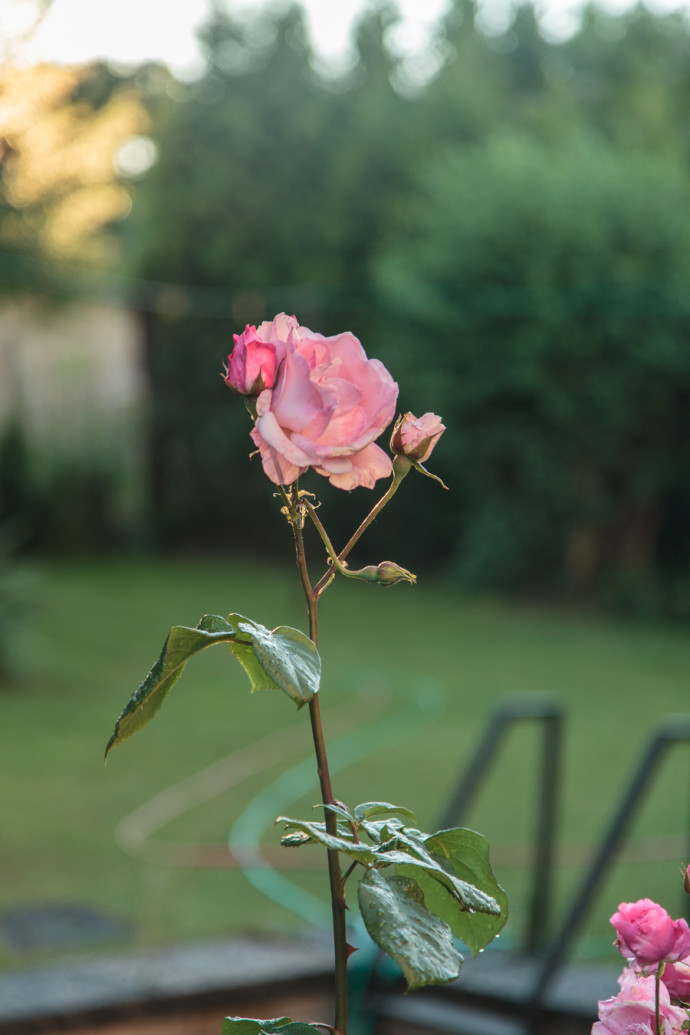 Thanks to the increased focal length, we can simplify the background. By giving less room to the sky, we’ve balanced out the light in the background vs. the foreground, so that the flower isn’t lost in the darkness. Even with the use of a small f-number, the background is very visible. Meanwhile, it’s unimportant for the photograph, and it uselessly distracts from the subject.
Canon EOS 5D MkII, EF 24-105/4.0, 1/320 s, f/4, ISO 400, focus 24 mm

Meanwhile for landscape photography, you will want a narrower shot if you know that the photo will be printed out on a small format. But when preparing wallpaper, meanwhile, choose a panoramic crop and a wide take. That way your audience will be able to explore all the small details in the landscape from close up. 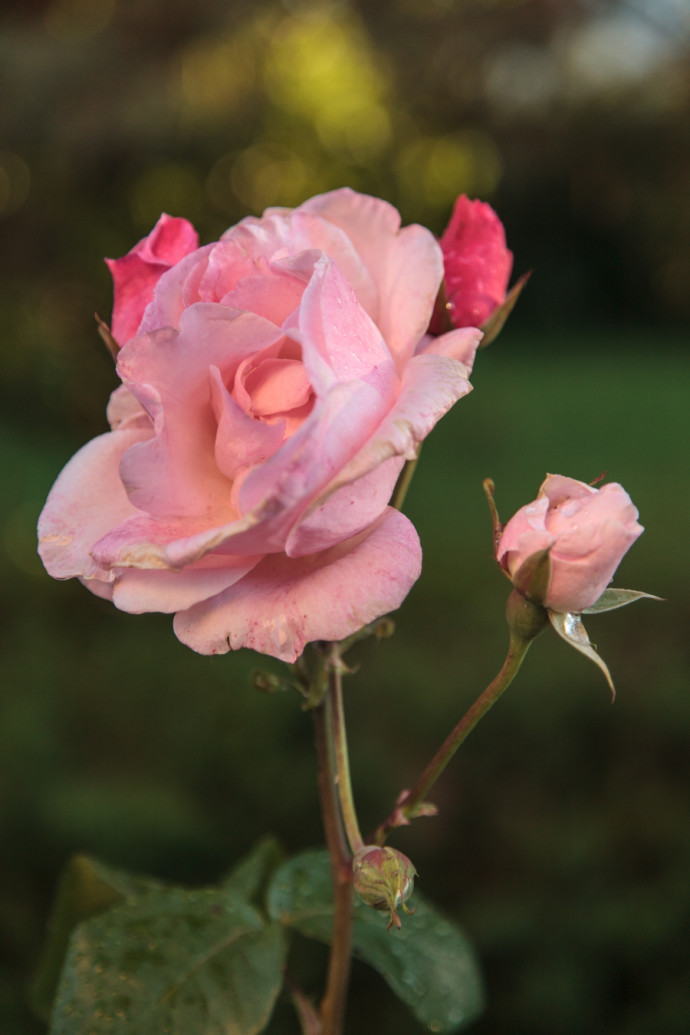 Shooting from close up has enabled us to cut out the background and fill up the frame. Even though this shot captures less of the flower than the preceding picture, it describes the flower better. All in all, a simpler composition enables you to express yourself more strongly.
Canon EOS 5D MkII, EF 24-105/4.0, 1/400 s, f/4, ISO 400, focus 84 mm

Print out Your Good Photos

Unfortunately, most photos today end their journeys on the screens of mobile devices and computer screens. But there’s still no harm in taking a picture composed for presentation at a nice large size and creating a print to match. A single picture like this, in front of you every day, can bring you a lot more joy than hundreds of shots laying forgotten on your memory card.