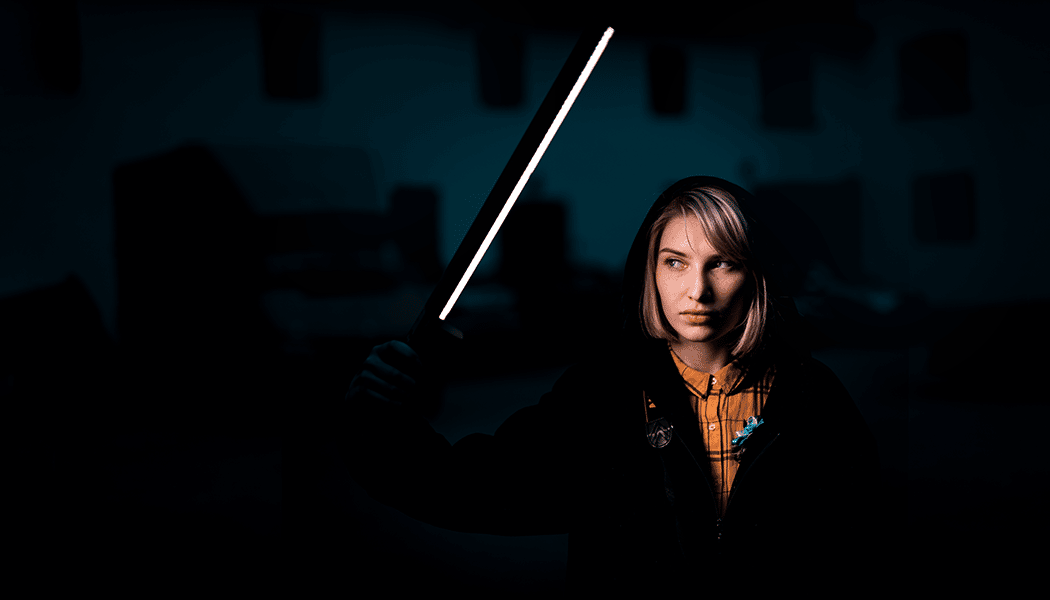 In this article I’ll be taking an in-depth look at one specific type of permanent photographic light—the Yongnuo YN360 RGB LED light stick. Let’s go through a few examples to see what light sticks are useful for and how they can make your work easier. As you’ll see for yourself, they’re a truly practical and creative bit of gear.

But right off the bat, I have to note that these are not traditional studio lights, and you won’t be able to do the lighting for a studio portrait with just a light stick. It’s not that their light is weak, but shining any kind of permanent light right in someone’s face is irritating; after all, that’s why system flashes are used in the studio. But when you’re taking pictures “in the field,” they’re easier to store than studio lights and flashes, and they serve nearly as well. And they can do lots of other things too.

Easy to Control With a Phone

The app for controlling this particular light stick is quite impressive. You can set the intensity of cool and warm light (3200K or 5500K) and any combination of RGB colors.

This control method is quite practical, because you don’t have to constantly run back to the stick to reconfigure things when you’re taking your pictures. The app is simple and works reliably. However, you can also find controls directly on the light; four buttons and one rotating selector for it all.

Turn on and Start Shooting

A stick’s main advantage over a flash is its readiness for use. There’s a whole series of tasks that delays me when I’m working with a flash:

For an LED light, all you have to do is to have one battery charged and maybe mount the light on a tripod. And then you can start. At least 15 minutes saved.

Portraits are served well by the soft light that you can get from e.g. a softbox or an umbrella. The light from an LED stick isn’t completely soft, but it isn’t completely hard either. It is flat light, but only in a single direction. So, studio lighting it’s not, but unlike a large softbox on a stand, you can take it with you anywhere and hold it in your hands.

If you set its diodes to a color temperature of 5500K, you get light that’s as close as possible to studio flashes.

With the right choice of angle, you get fairly pleasant soft light. For this photo the goal was a classic Rembrandt portrait lighting, the kind that’s already been used for hundreds of years in painting and has found its way into photography and film as well.

Another (rather scary) lighting type is from below. Because you don’t tend to see faces lighted this way in everyday life, they look strange, and the shadows from the face look frightening. In practice this lighting isn’t used much, but why not try something new…

Sometimes all it takes to make a portrait work is to add a little light to the face. Light sticks have the advantage over external flashes of having their effects be visible immediately, rather than only after the shot. Yes, you could use a big studio flash with  a pilot light inside, but here again this is a solution that’s impractical to carry around. A light stick has a thread at the bottom that lets you mount it onto any tripod you choose.

Colored Light in a Product Photo

If you don’t have an interesting background, you can add color lighting to it to get an impressive atmosphere. Don’t be afraid to experiment with different colors and light temperatures. Shades of blue, for example, go great with yellow incandescent light.

In this picture, I used this color combination when creating pictures of “levitating” objects. In this case, it was my notebook that I made levitate. Don’t be afraid to try out different color combinations; you’ll definitely find a lot you like.

Lighting the Foreground of an Astrophoto

When you’re photographing the night sky, it’s nice to have something interesting in the photo’s foreground as well. And since the foreground starts out dark, it’s useful to give that something some lighting. Here I used two different colors, one from each side.

I found another interesting use for light sticks when I started using them for light painting. All you need for this is a tripod, darkness, and a long exposure. Then you just wave the light in the air and paint something. All the light that appears in front of the lens during your exposure will be visible in your photo.

TIP: If you have an assistant, try also changing the light color using the stick’s app while you’re painting.

A Supplement to Studio Lights

During a recent ad and product shoot, I used the YN360 to light the background. Its battery can (only) provide light at high output for around two hours. That may not always be enough—but you can also power it using a universal 8V adapter. It’s not included in the package, but it’s easy to pick up, and it works reliably.

Maybe with the exception of the power button that sticks out and sometimes makes the light turn on when you just lay it down, this light is smartly designed and made. I take it with me to almost every shoot, and it’s already saved me lots of time and work on many occasions.