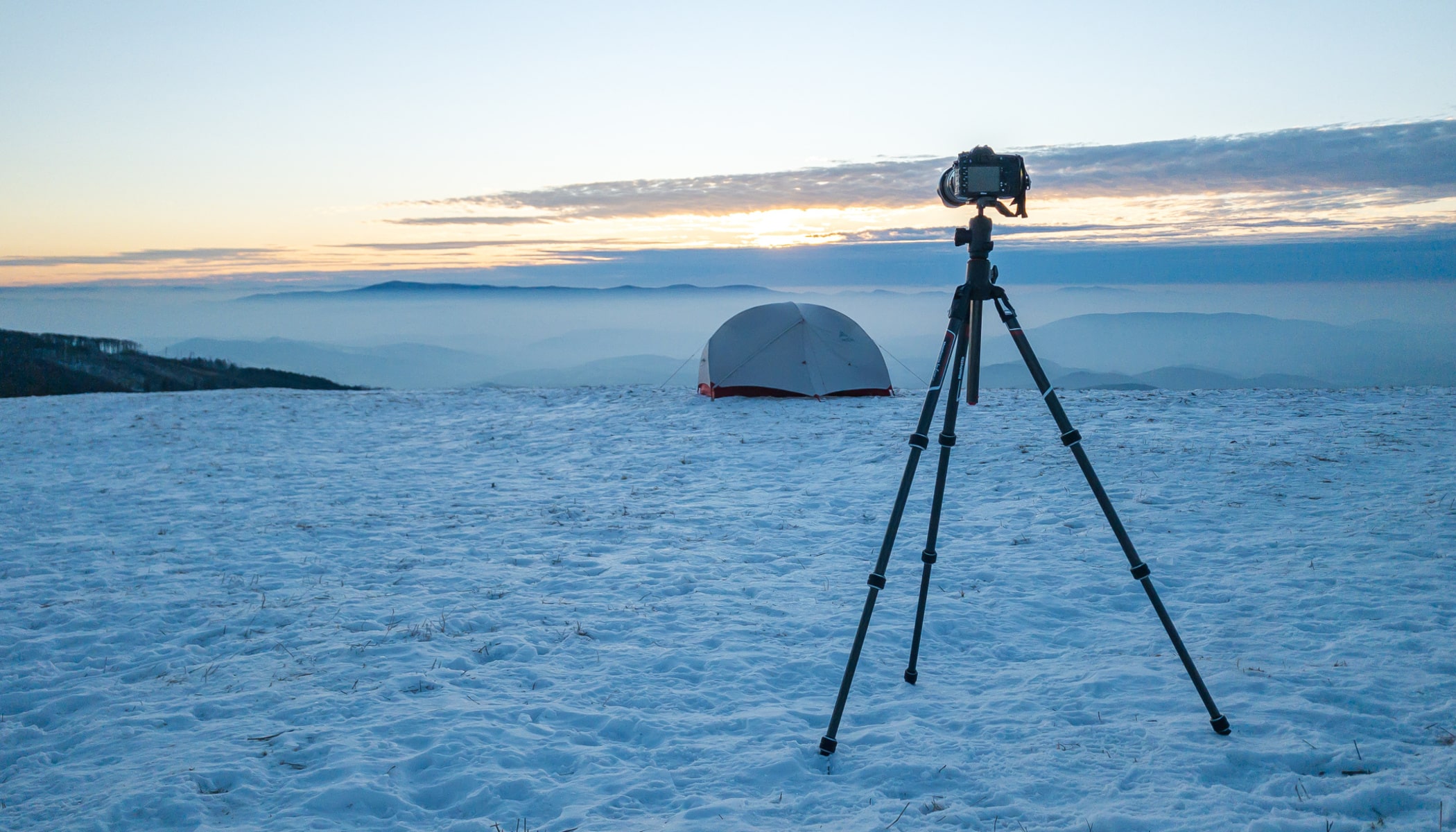 In today’s review, we’ll be looking at the carbon tripod from the Italian manufacturer Manfrotto. They praise its collapsibility, its low weight, and the built-in 90° column mechanism for macro photography in its top casting. We’ve test-driven it for you and come back with an evaluation and a verdict. Read up on how the Manfrotto BeFree GT XPRO stood up in our testing.

The Manfrotto BeFree GT XPRO Carbon is a 4-section traveler’s tripod, done BeFree style. Its body is made of carbon fiber, and it weighs 1.76 kg. Its main advantage lies in its portability, and in its option to offset its column mechanism—its center rod—by 90° for use in macro photography. This tripod’s controls are intuitive and convenient to work with thanks to the BeFree build. Its legs are fitted with the M-lock system, which you use for quickly and easily securing them in the given section.

In its basic configuration, this tripod is equipped with a light Manfrotto 496 ball head with configurable traction and an option for pano rotation. All of this is underscored by the head’s maximum load: 10 kg. The ball head has an attachment system that’s compatible with the Manfrotto RC2 and Arca-Swiss quick release systems. 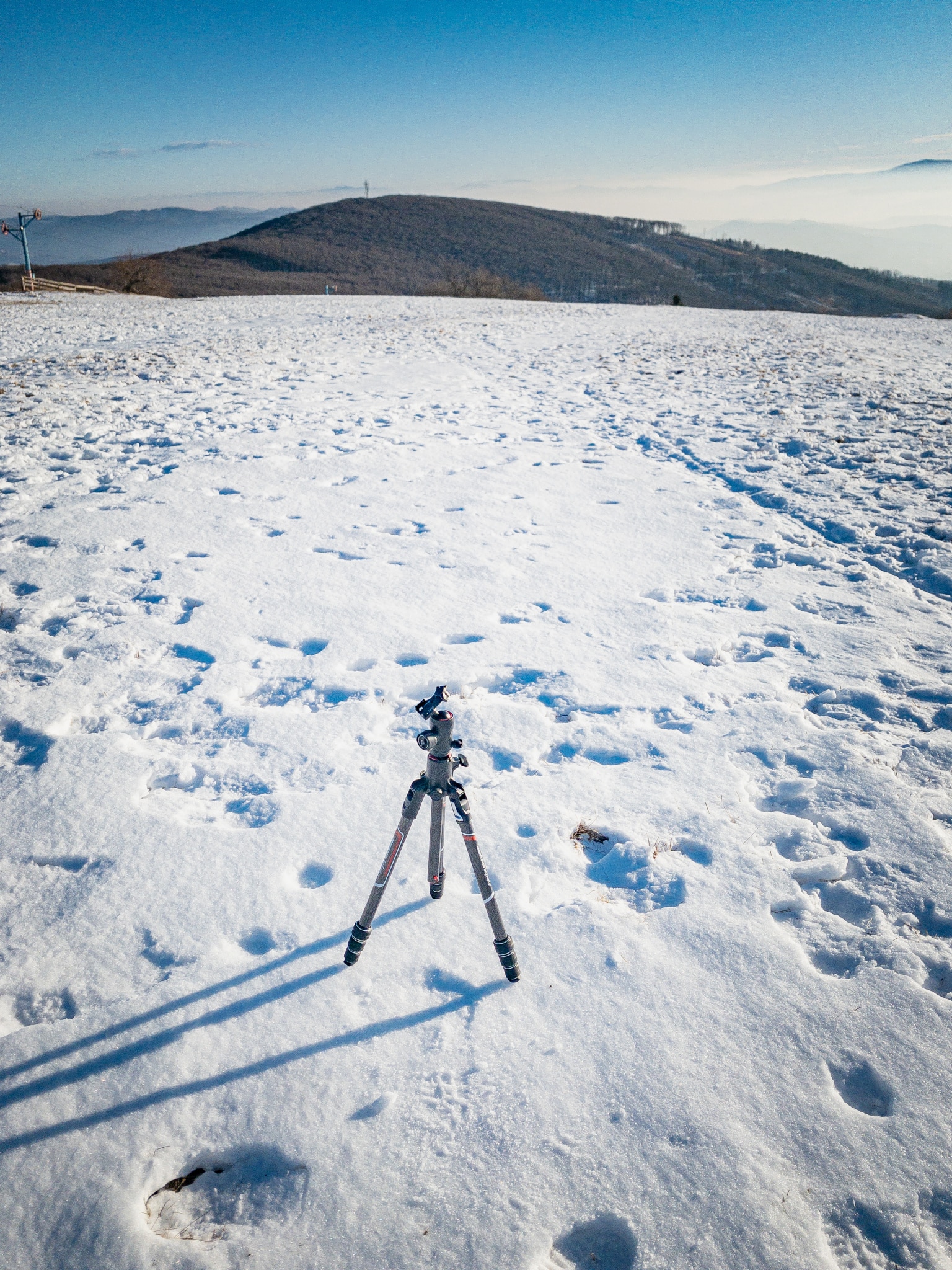 Watch this video with a brief summary of our review. In it you’ll learn how this tripod is controlled and what special tricks it has in store.

I’ve already owned one Manfrotto macro tripod for a few years now, and I constantly rely on it due to its quality and robust construction. The only thing that held me back during my nature trips was its weight and bulkiness. So I was mainly curious how this problem had been handled after several years of work.

The tripod’s original box concealed a small transport case with a perfectly folded tripod inside. One surprise for me was the tripod’s overall balance in its folded state, where the tripod felt even lighter than the manufacturer’s stated weight. 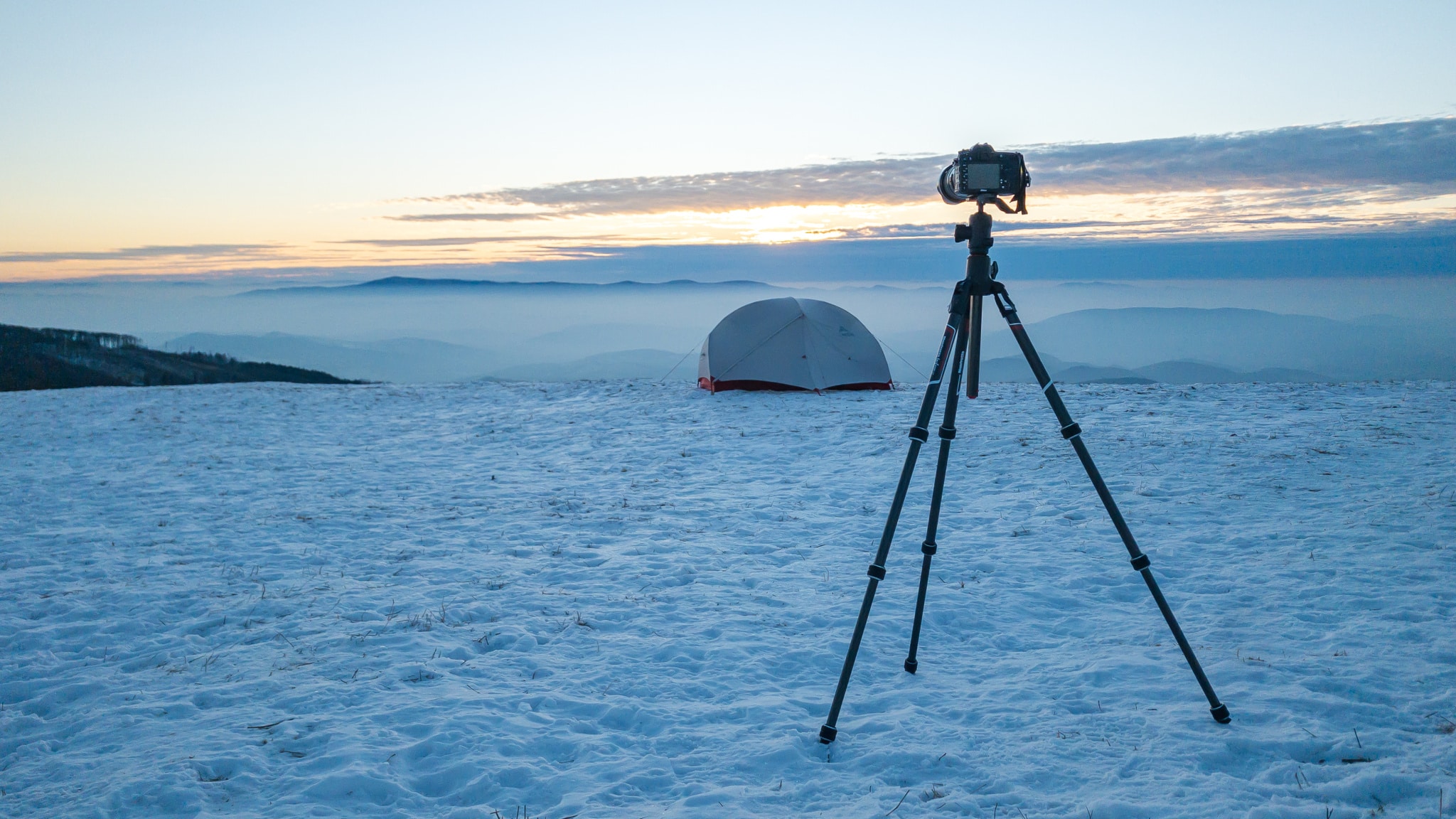 A few other things I wanted to know with this tripod were how compact it was, whether I could attach it to my backpack, and how easily I could control it in cold weather. I vividly remember how I cursed and swore as I lugged my old Manfrotto tripod with its weight of over 2 kg and terrible portability around in the mountains. So I was curious whether (and, if appropriate, how many times) I would swear at the Manfrotto BeFree GT XPRO Carbon on my way up the slopes and when using it in cold weather.

A Tripod in the Field

I unpacked this tripod from its transport case and placed it in a side pocket of my GossamerGear Gorilla 40l backpack, and I fastened it with two straps. Thanks to its transport height of 43 cm, 1/3 of this tripod fit into the backpack pocket. In its transport form, it didn’t get in the way as I hiked uphill, and I practically didn’t notice I had it. I broke camp at the top and let the tripod freeze in the tent’s atrium until the morning.

The tripod wasn’t stiff at all in the morning, and it was pleasant to work with; its controls are large enough to be used while wearing gloves. The M-lock leg-locking system worked great even in chilly weather, and it didn’t show any signs of slipping or preventing me from pulling far out enough.

The tripod’s overall weight balance keeps its stability good enough even in the basic leg layout that I didn’t need to weigh it down with a backpack even in the morning wind, despite this tripod’s light weight.

In my test in the wild, the tripod stood up great, and in the end I didn’t end up cursing at it even once.

Back in the warmth of my home, I also tested this tripod in macro photography. I attached the macro slider to it, and then attached my Nikon D7100 with a Tamron 90mm f/2.8 lens to that. I was worried how stable it would be after tilting the column mechanism by 90° and shifting the tripod’s center of gravity outside of its actual center. Fortunately my worries were in vain. The tripod didn’t even budge, and it let me take pictures with no problems. 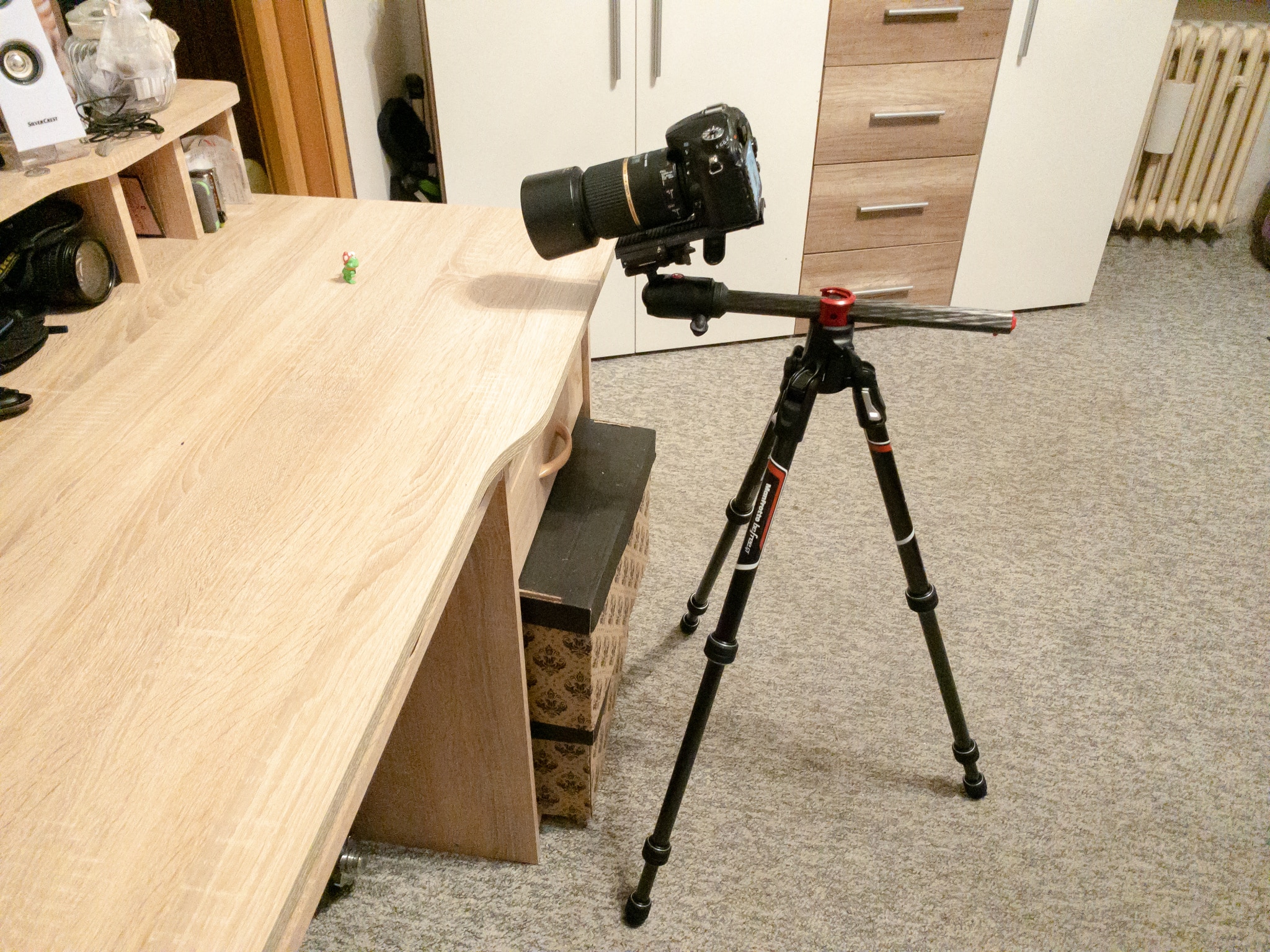 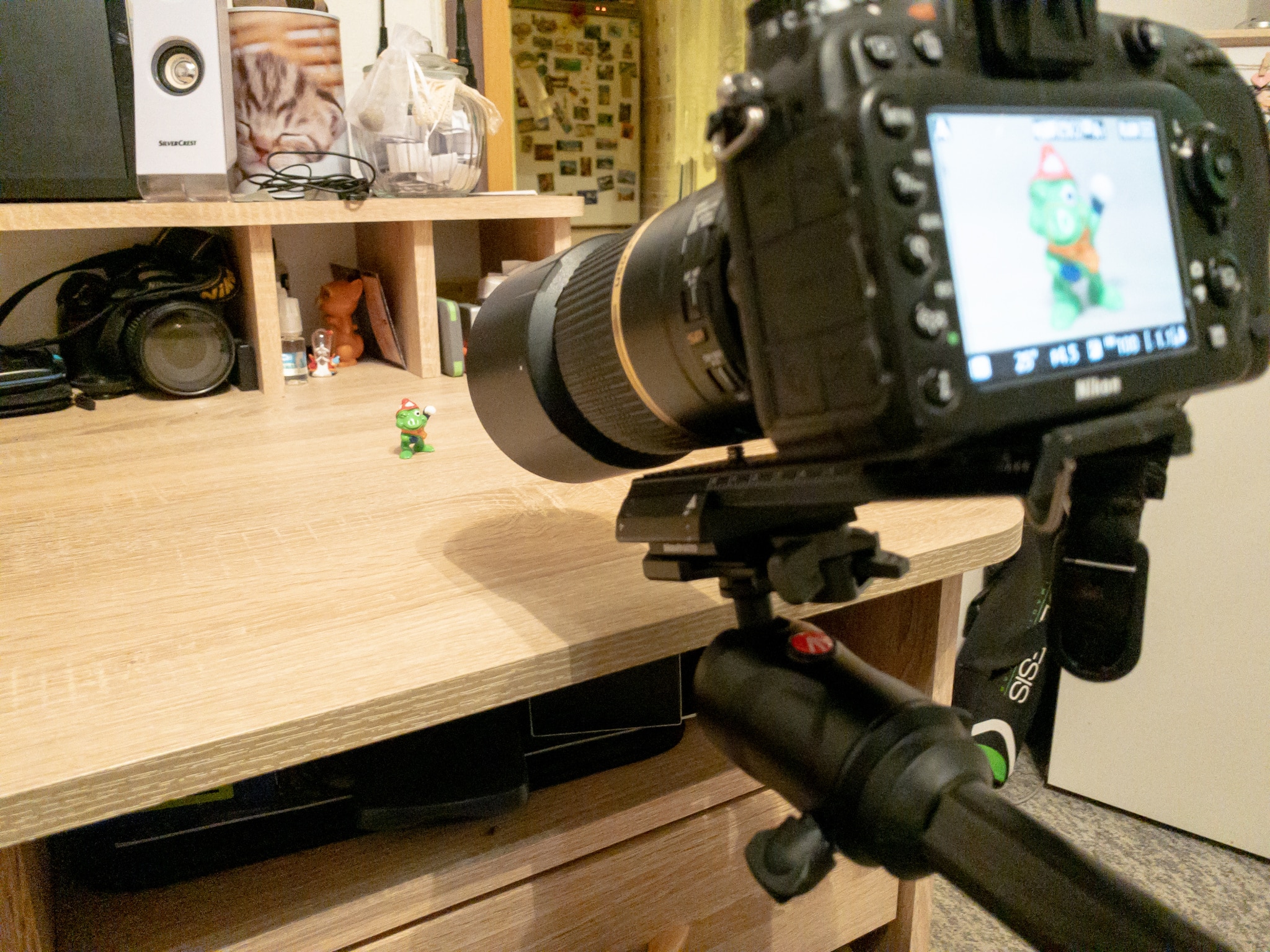 I tested this tripod thoroughly, and here’s what I found:

The tripod’s transport height (just 43 cm) is terrific, but meanwhile its maximum height of 162 cm is too much for me personally, and I didn’t use it even once. I was most interested by the manufacturer’s stated minimum working height of 9 cm above the ground. You achieve this height by unfolding the legs to an 89° angle and tilting the column mechanism by 90 degrees. And indeed, with these manufacturer-recommended settings, you really can get down to 9 cm above the ground.

You can actually go even lower than the stated minimum working height by releasing the stoppers on two of the tripod’s legs and reducing the angle by stretching out the tripod’s third leg. This brings its working height to less than 3 cm, which will make it easy for you to take your macro photos.

As for the minuses, I found very few. Which is precisely what I’d expect for a tripod at this price. And that brings me to the one stumbling block: this tripod really is fairly pricey (it’s sold for around $500). But the quality definitely matches the price, and so this complaint is relative and is something for the personal consideration when you’re considering an investment into this tripod. I’d also welcome having replacement legs, for example with a tip, as a part of the package to serve as an alternative to the rubber feet. Even those these held fast in my testing conditions, I can imagine situations where tips would be more appropriate.

It’s also worth mentioning that Manfrotto also makes this same tripod in an aluminum version. The two types are identical except for the fact that the aluminum version is one or two hundred dollars cheaper. But you have to be willing to accept 200 more grams of weight and a less durable material. But this is still a very high-quality alternative.

+ low weight, great compactness and balance in its folded state

+ quick and convenient work with every part of the tripod

– no replacement feet for the tripod

RAW vs. JPG: The Eternal Struggle. When Is It Best to Shoot to RAW?