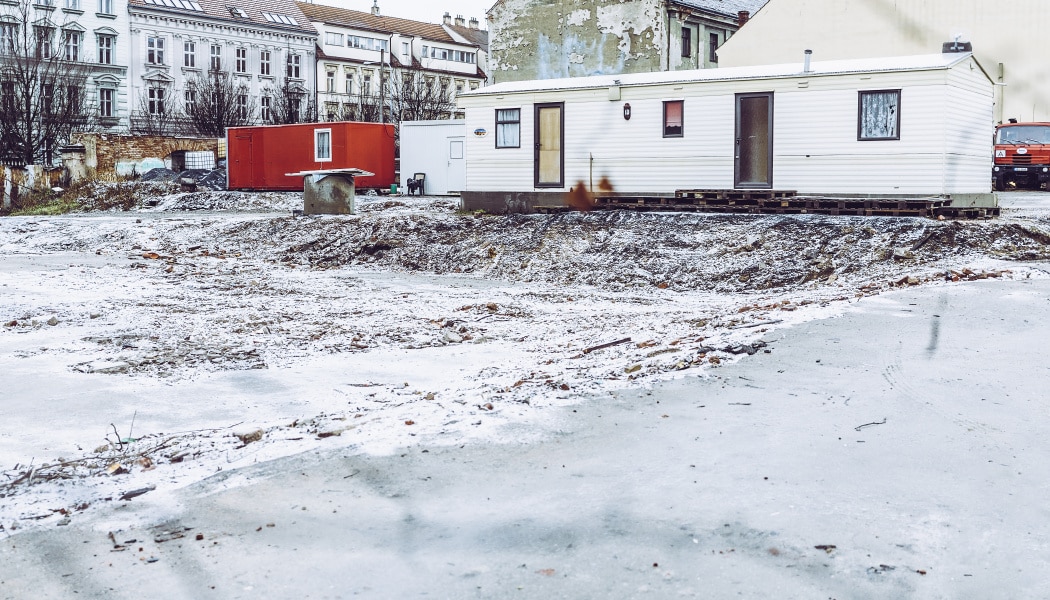 Taking pictures in winter has its magic not only in the mountains, but also in the city. And this stays true even when the weather is against you and instead of white snow it offers what seems like “blah” weather. You can make even this kind of weather work in your favor. Take a look at what you can photograph in winter and how to come to terms with the cold weather and waning light.

You can get a winter atmosphere into a photo even without the help of snowflakes and pleasantly fluffy fallen snow. You just need to find another way to express the cold and inhospitable weather. All you have to do is think over a few questions that will help you out here.

When the temperature drops and the sky goes gray, people leave the streets. And it’s no wonder. Everyone’s trying to get where they’re going as quickly as possible, and nobody wants to linger outside very much. So if you mainly want to photograph people in the streets, you have to adjust your tactics.

You’ll notice how people are often looking towards the ground (especially when a cold wind enters the mix). So you can change the angle for your pictures as well.

Or try on the other hand focusing on the fact that the streets are half-empty, and dive into minimalist pictures. This will probably give you melancholic pictures with solitary people in the city’s concrete jungle as your theme.

Another possibility is to turn your view around and look out onto the streets instead of out from them. Sit in a car, bus, or (if your city has them) tram, and pull out your camera there as well. You’ll find people who are looking out of the window, drawing on windowpane dew, reading books, or maybe watching their phones. Even a space as constricted as a tram car can offer lots of topics and stories.

Taking pictures in public transport may seem demanding. It feels like everyone sees you more than usual, and it’s hard to stay inconspicuous. So if you don’t want to draw so much attention to yourself, shoot through the live view on your camera.

Ideally you’ll have a flip-out screen you can use. Don’t kick yourself here and say this is a deception. It’s really just a technique,  a way to get un-posed, natural snapshots.

Besides public transport, try looking into shop windows and the insides of businesses as you walk down the streets. Take note of people in cafes, snack bars, and restaurants who are enjoying their warm coffee mug while the weather outside is just ugh. This too can be an interesting subject for street photography.

Make Use of Motion in Winter Photography

It’s not just snow that shapes the winter. Typical winter activities shape it too. While you can’t ski or make a snowman without snow, you don’t need it for ice skating. So if there’s an outdoor ice skating area in your city, don’t hesitate to head out there and point your lens at the skaters. Keep in mind that motion is the important thing in skating. So try to get it into your photo as well.

For example you can pick out a skillful skater and follow them using panning to blur their background. Just aim at and focus on the person you’ve picked and then copy their motion with your lens. It pays here to turn on your camera’s continuous focusing mode, along with its setting for shooting a series.

Or try the opposite—blur the outlines of the skaters themselves.

Set a long exposure on the camera. The skaters are moving relatively quickly, which means that with a second or more, they’ll turn into nothing but nearly indistinguishable smudges. So choose a time around half a second. For these pictures, place your camera on a tripod or at least on a firm base to prevent blurring.

You can get a nice contrast this way between the people watching the skating and the skaters in motion.

When There’s Nothing But Puddles, Photograph Puddles

Is the melting snow leaving you feeling down? Don’t despair, because the wetness in the street can really help out your photography. Just think for example of the famous photo by Henri Cartier-Bresson with a man jumping over a puddle.

In puddles and slushy snow you can find reflections of passersby, self-portraits, and new worlds. Let yourself be carried away your imagination and watch the wet sidewalks instead of people sometimes.

Short days and fewer hours of light are also a part of winter. That gives you all the more time for night and evening photography.

Here too you won’t mind if the snow is melting. The lights of lamps, cars, and shop windows are reflected in the wet roads and the puddles, and they have some nice colors to offer.

Seek out places with neon signs for example. Blue, red, and pink light can create an especially nice atmosphere at night.

As soon as it gets dark, it’s the ideal time to try out a long exposure. Cars driving down the road are blurred into red, white, and yellow stripes. And you will get yet another new view of the city. You can go for a darker photo and get a mysterious look, or instead emphasize light (if it happens to be snowing) and the sparkliness of the evening streets.

Take Pictures at the City’s Edge

If you’re feeling like there are no more pictures to take downtown, head out to the edge of town. With the gray clouds and the lack of sun rays, you can get a gloomy, or even almost apocalyptic, atmosphere in abandoned industrial areas and at dumps and construction sites.

And actually, industrial sites also work well with snow in photos. The dirty smokestacks churning out clouds and the rusted constructions sticking out of the pure-white blanket of snow form a nice contrast.

Heading out to the city’s edge is also a nice opportunity to experience secluded places you haven’t yet discovered. And you might just learn something new about the city too.

When It’s Snowing, Run Straight Out

When it does start to snow, grab your camera and run outside. The snow probably won’t last very long. So notice how the streets’ atmosphere changes. Everything is suddenly quieter and brighter.

Watch how the snow loads down the trees in the parks and along the roads. How it forms shapes as it covers the benches and cars.

Focus on fresh footprints in the snow and try using them as guidelines in your pictures.

Take pictures of how people fight the snow, shake it off, and hide their faces into the hoods of their coats.

Notice how buildings change under the snow deposits.

How to Handle Light and Exposure in Winter Photography

Be careful about exposure when you’re taking pictures in winter. The surface of the snow acts as a giant reflector that can seriously confuse cameras’ light meters. It can lead you to either underexpose your pictures and get gray snow, or to overexpose them, and get detail-less snow that looks like a big smudge of white.

So measure your exposure based on the brightest part of the picture. Make sure the snow is bright enough, but not overexposed. It doesn’t matter if the rest of the picture is dark—you can pull the details out of it on a computer in Zoner Photo Studio. Meanwhile if there’s blowout (detail lost to overexposure) in the snow, you unfortunately can’t rescue much there.

Also, don’t forget to put a lens hood on your camera when you’re photographing a snow-covered city. It will minimize reflections off the lens.

If it’s cloudy and snowless on the other hand, try getting the most out of the solid, flat light. While it won’t offer you many ways to play with shadows, it’s also soft and gentle, making it good for portraits.

Protect Your Gear and Yourself from the Cold

No matter whether it’s snowing or not, don’t forget to protect yourself from the cold. Definitely don’t leave your warm shoes, thermal underwear, hat, or gloves at home. Gloves are better than mittens, of course—you’re using a camera.

Also don’t forget to take enough charged batteries. They discharge faster in cold weather. So if you can, carry them in your pockets between clothing layers so that they stay in a warm place.

Memory cards suffer in the cold as well. So if you’re taking extras, do the same with them as with you are with the batteries.

Meanwhile it pays to have a UV filter on your lens. Besides its other benefits, it protects the lens from snow.

Leave your camera in the bag between shots, and if it’s snowing or raining, shut it into a protective pouch. Or at least fasten a little plastic around the camera body and lens, to keep moisture from getting inside.

After coming back home from taking your pictures, remove the memory card from your camera, and let the camera gradually adjust to the higher temperature. That is, leave it in the bag for about two hours. If you take it out right away, moisture can condense inside it due to the sudden change of temperature.

You can also leave the camera bag on your windowsill to slow down its return to room temperature. Some photographers recommend putting the camera into a sealable plastic bag. The moisture is supposed to then condense in the bag and not in the camera.

Taking pictures in winter requires good preparation and determination. If the weather’s not on your side and it seems more like a worn-out, cloudy autumn, then you need more inventiveness and a longer search for inspiration. But getting a good picture isn’t impossible. Even in what seem to be the most boring conditions, you can get interesting pictures. So head out and get them!