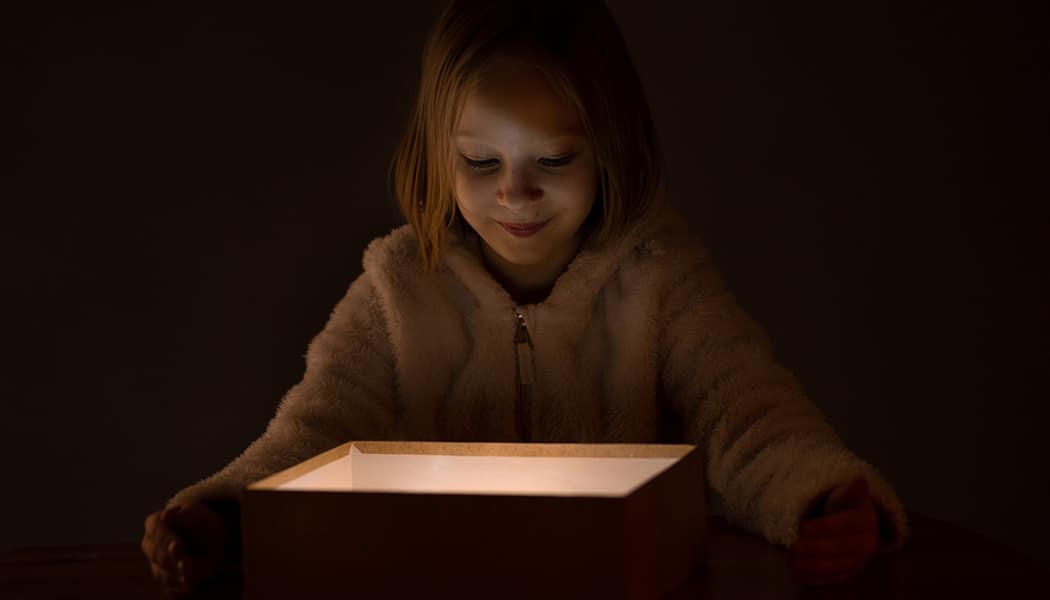 No Christmas photo gifts for Granny yet? No problem. Light some candles, roll out some Christmas lights, and make an atmosphere of creativity for yourself and your children. Delight the grandparents, while having lots of Christmas fun with your kids too.

The pre-Christmas hustle is no friend to creativity. Even though Advent should be a time of calming and stopping, its reality is often quite different. Take inspiration in this article and create magical pictures filled with warmth.

Don’t let the darkness outside fool you: you do not want a flash for your Christmas photos. A flash has a light temperature of around 5,500 Kelvin (similar to daylight). For pictures with a hint of warmth, light sources with a lower temperature—roughly 2,500–3,500 Kelvin—work best.

Traditional incandescents or candles have this kind of temperature. By using the colder light from a flash, you’d rob yourself of the atmosphere of warmth and produce an ordinary portrait. So work in some lamps, and don’t forget to set a high ISO.

Tip: Set your camera’s white balance to incandescent or shoot to RAW. RAW will give you more control over your results when you go on to edit the picture.

In our article on still lifes, you had a chance to read about using lamps for still life photography. You can work with them similarly in kid photography. One basic prerequisite for a successful photo of this kind is nice, soft light. To get it, add a large diffusion layer (or two) in front of the lamp. This gives you a makeshift softbox.

But an even better solution is to use a lamp that already has a diffusion layer inside it. Desk lamps and floor lamps covered with white cloth or a similar material are a good example.

When you’re taking pictures under low light, you need to open up the aperture so that a maximum of light reaches the sensor. At the same time, you need to get down to the kind of exposure time that is still achievable by hand—tripods are fairly impractical in kid photography. So raising the ISO will also be a logical step.

Another possibility is to move the light source as close as possible to the child. This gives you both brighter lighting (and thus a lower ISO) and softer light. But just as with any other light source, you’ll have to take care to avoid producing blowout (overexposed spots). So watch the histogram, and especially any blowout warnings for the pictures you take.

Bring in Other Light Sources Too

You can create a Christmas atmosphere using both warm lamp light and, above all, Christmas light props such as candles, Christmas lights, and other shining decorations. Don’t forget your nation’s holiday traditions here—this can even mean things like sparklers! When you’re mixing multiple types of light, think in advance about which source you’ll set as the primary one, and which as supplementary.

Watch the logic of the lights’ layout, and watch their shadows as well. Pay special attention to the direction the light is coming from. Direct light (from the direction of the camera) flattens an image, while side light emphasizes its depth, but also throws a hard shadow on its unlit portions. You can partially avoid this using a reflector; in this case a golden reflector will work best.

Note that lighting from below (typically lighting from a candle that the child is holding in their hands) can be problematic. That’s because the look from light placed under a face can even border on horror. So it’s better to place candles and other light decorations higher than the child’s chin, or use something else as the main light source.

Christmas lights are a typical accessory for Christmas-themed photographs. If you place them behind the child and set a low f-number, you’ll get beautiful bokeh. But you can also position them right in front of the lens, to create dreamlike images with light circles in front of the child. (Unfortunately I don’t have an illustration for this lighting approach, because my model said she was “too tired now.”)

There are lots of possibilities, and the only limits are your creativity and how ready your subject is to cooperate. Maybe you can use the results of your creative work together for this year’s season’s greetings!