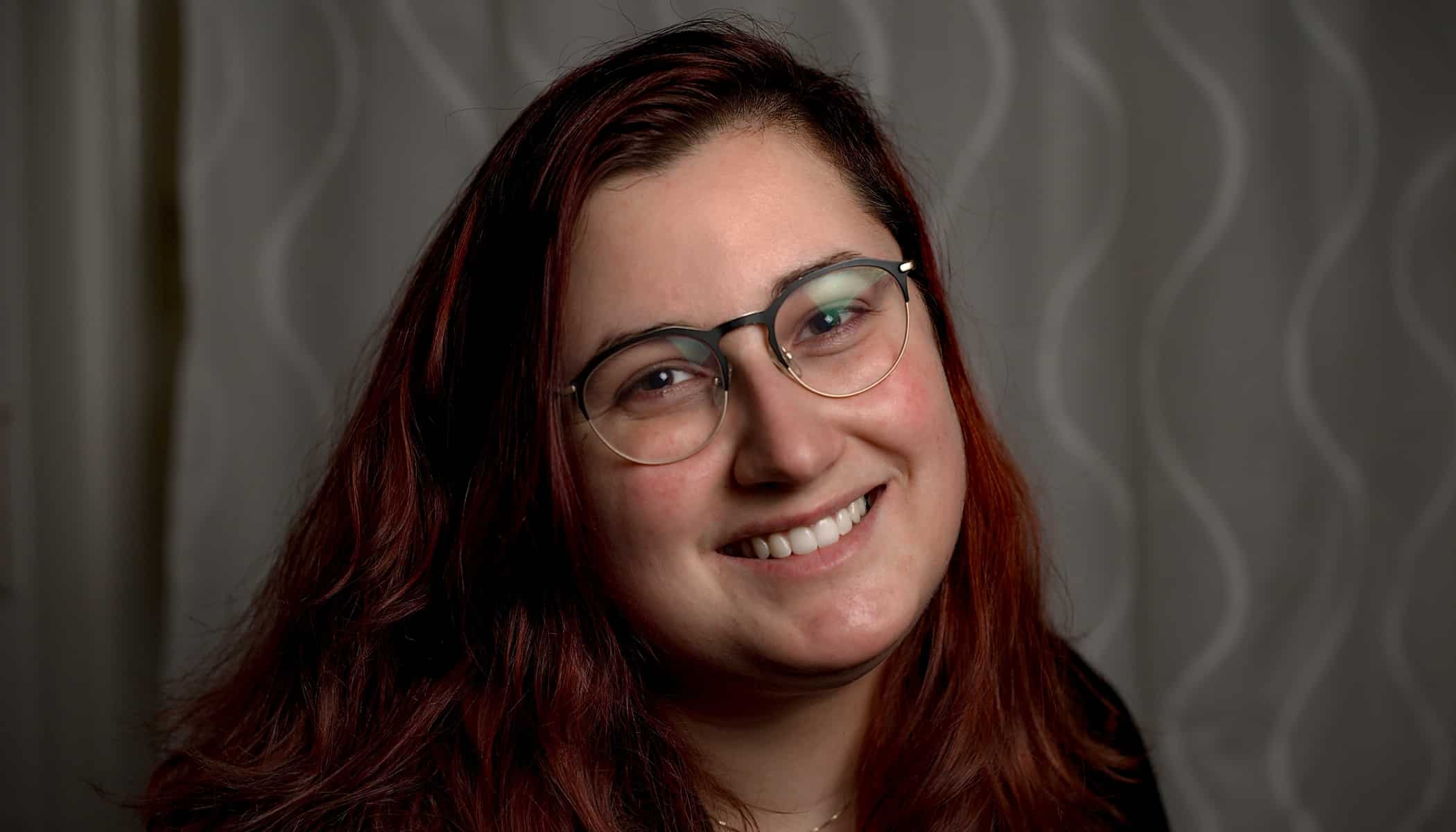 Zdenka Vratna focuses on a rather untraditional genre—cosplay photography. That means primarily costumes based on fantasy, sci-fi, or post-apocalyptic stories. We asked her she how she got into photography and what parts of it she enjoys. And she also revealed some of her tried and tested photography tricks and shared some of her experience. Read our engaging interview, browse her fantastic photos, and get to know this likable, talented photographer.

Zdenka, you’ve been actively involved in photography for a year now. What brought you into it?

Already back in high school I started to take a little interest in it: that’s when my mom bought me my first camera. I really wanted a DSLR, but we couldn’t afford it, so I bought a digital camera that looked a little bit like a DSLR and set a shutter sound a little like the one from a DSLR. That was a Canon PowerShot S3I6 PC 1192. I’ve loved that shutter sound since forever. 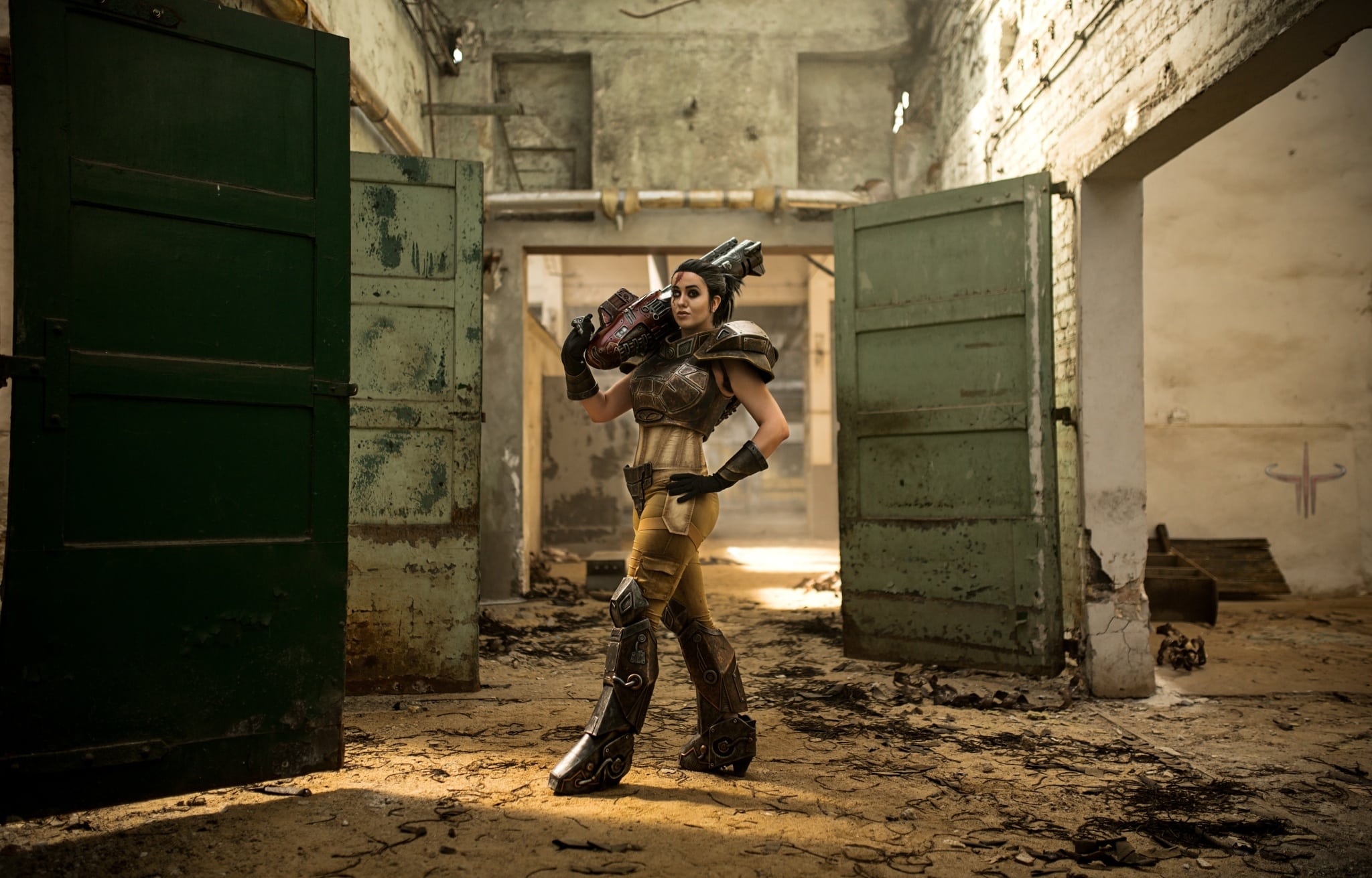 Unfortunately a while later I lost interest in photography again. And I abandoned it for many years. And then, when I was 27, just for the heck of it, for one event, I borrowed a DSLR from my mom and tried taking some pictures. I was worried I’d be bored at the event, and so I took my camera with me and, besides how I had fun, my partner told me I looked wonderfully excited while I was at it. And people also went on to tell me I was pretty good at it, and so a few months later, I tried getting some model and photographer friends to head out for a shoot together, and that’s where it all started. I haven’t been able to stop ever since. It really helped me to find meaning at a time when I wasn’t doing very well. It fulfilled me, I met with praise and criticism, and I moved forward on and on. And so now I’m here. 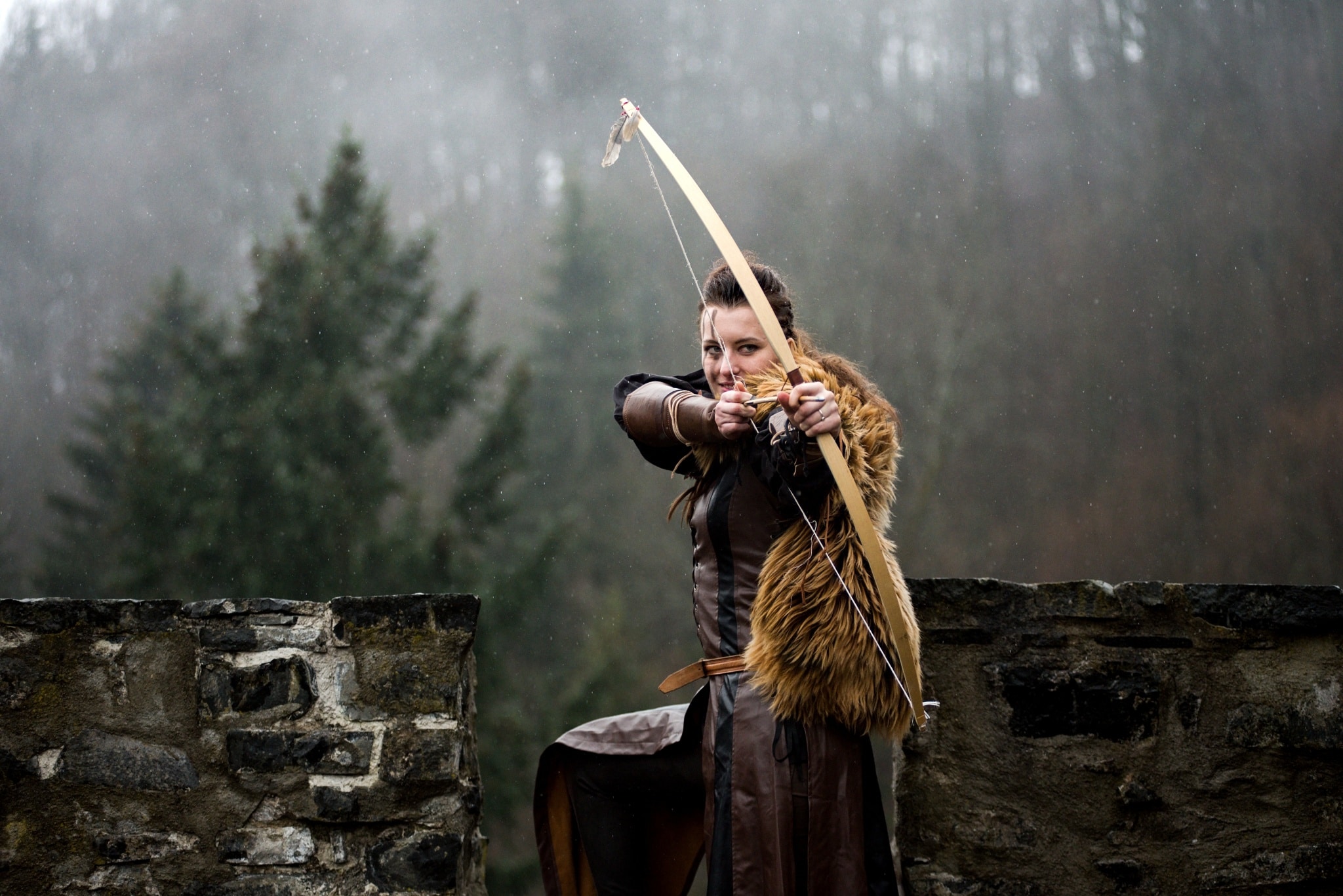 What source of inspiration was most useful for you at the start, to help you learn to compose and expose your pictures well?

I didn’t use sources of inspiration much. I did everything by feel, how I saw it. I made (and still make) an awful lot of mistakes, and one friend that I photograph always points them out to me. After I make them, I try to improve that area in some way. I’ve looked at some other photographers on Instagram, and I’ve been at a grand total of one exhibition… For me it’s simply important that I enjoy it; I don’t have any great need to do it well, mainly because I don’t think there is a “well” in art.

You edit your photos exclusively in Zoner Photo Studio; what aspects of it are irreplaceable for you?

It’s simple. That was really important for me in the beginning. Over time, I started to discover some great features, I’ve really appreciated the addition of Liquify, I like fine-tuning colors during development, I like using Barrel Distortion. Color edits are all in a day’s work for me, and similarly I do some clever color-based vignetting for just about every photo. It’s unobtrusive yet effective.

For me it’s simply important that I enjoy it; I don’t have any great need to do it well, mainly because I don’t think there is a “well” in art.

One of the main topics in your photography is cosplay. You’ve even written an article for our Learn Photography magazine on where to find models, how to choose a good location, what to watch out for during the shoot, and what to pay attention to the most. But it didn’t mention how much of your time is taken up by the shoot itself and the edits after that?

Photography has 3 phases. Preparation, the shoot, and edits. I spend at least an hour on the preparations, and sometimes I spend even more. Terribly often, I’ll find myself preparing while I’m doing something else. I’m basically constantly thinking about the shoots that I have coming up. When I’m traveling around Prague, sitting in the bathtub, standing at the stove, whenever. Communicating with models and choosing locations also takes some time, and I sometimes also make my own photography tools. 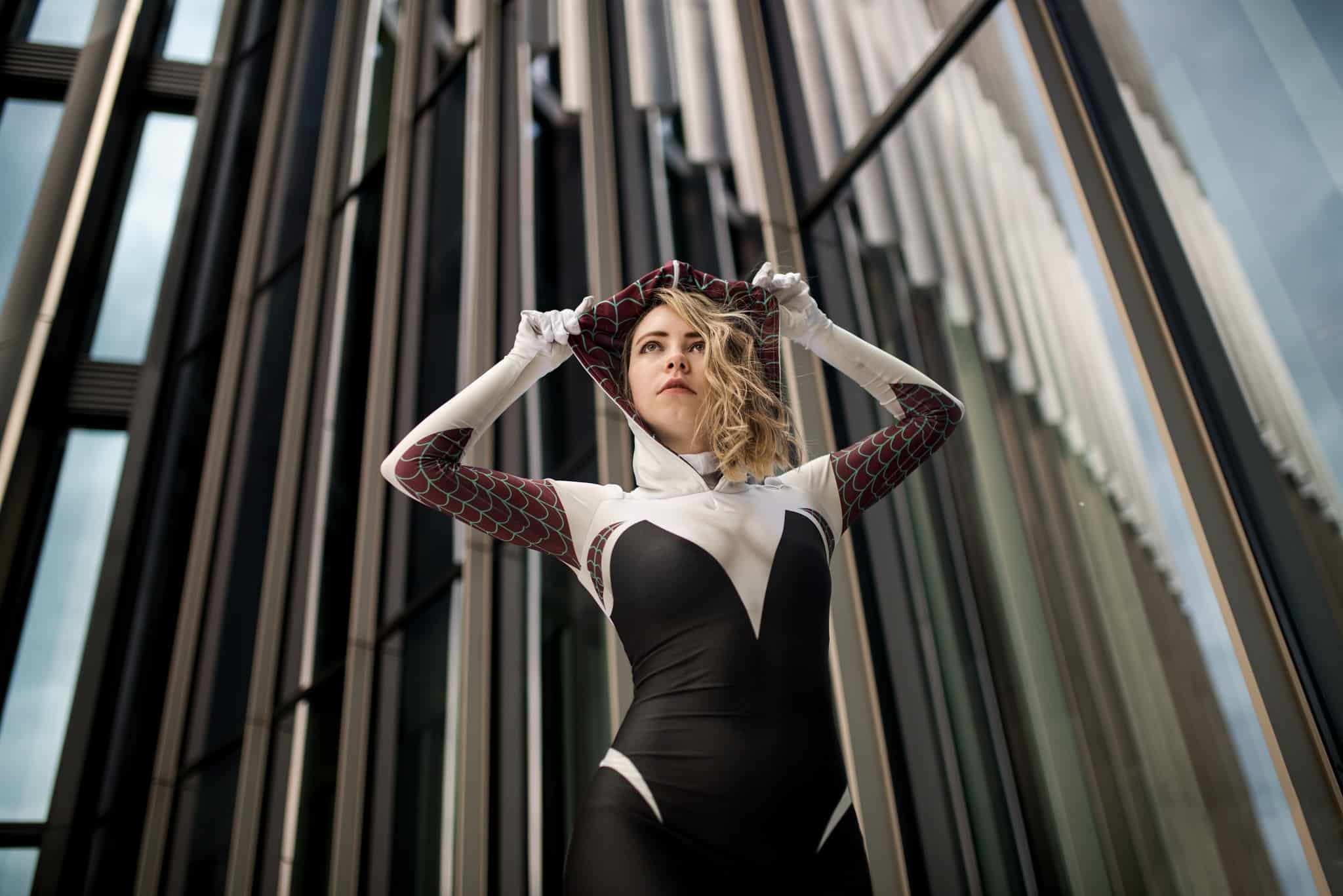 A shoot can be done in an hour, but it can also take all day. My trip to a shot site might take 20 minutes by public transport or 6 hours by car. It really varies. Same with the editing. Sometimes it takes me 15 minutes, sometimes 3 hours; it depends quite a bit on a lot of factors.

Your models are often holding fire in their hands, or are wreathed in smoke, and then there’s Violet Evergarden, who has envelopes flying around her. How did you achieve these effects?

The fire is real fire. I have my tricks for how to set a fire safely even in the palm of someone’s hand. I don’t like adding effects into photos. I like what’s natural. My smoke is always from either a smoke grenade or a smoke machine. As for Violet, there we spent a while throwing envelopes around her until we got several shots that I then joined into one. 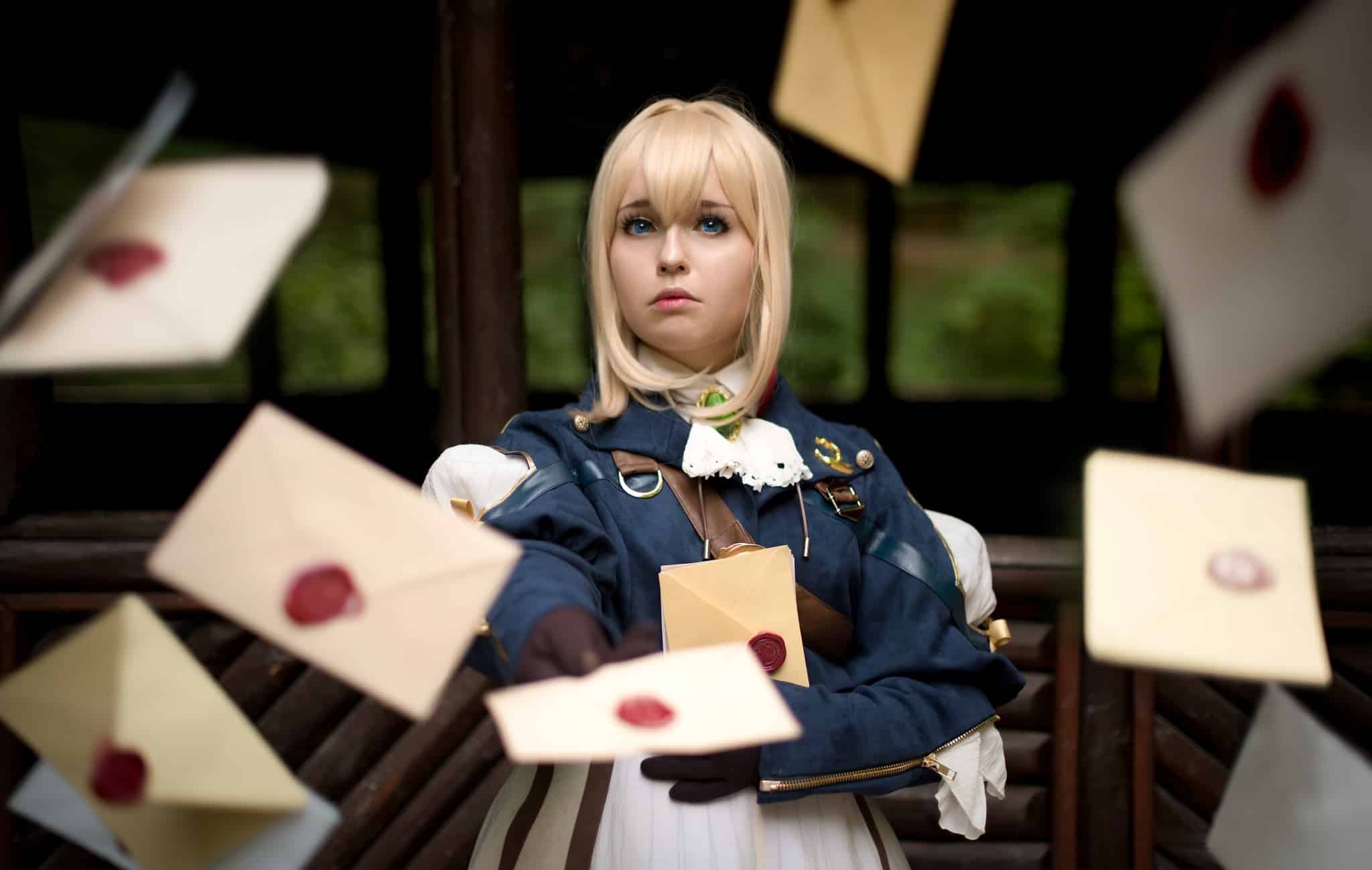 Is there anything we all should watch out for when starting out with fire or other live effects?

If you want to use real fire, think of safety first. Don’t do it in summer, or in places with no water around. Don’t do it if you haven’t trained for it, and above all, don’t endanger anybody. Not even the best photo is worth that. If you want to add a fire effect artificially, then keep in mind that fire is a light source. A major light source. You have to add a glow and a halo to it. Ideally you should have a light source in the model’s hands during the shoot and then edit in the fire. Smoke grenades shouldn’t be used indoors or without letting the local firefighters know. For any sort of effects, it’s good to study up on them in advance and take inspiration from other photographers where you like how they do that kind of effect.

Your website includes a report from the Junktown festival. Your photos make it look high-adrenaline and even unsafe. What’s it all about?

Junktown is a fantastic event, held in Bratronice [fairly close to Prague – eds.], and it definitely isn’t unsafe. It’s very photogenic, because it has an unbelievable atmosphere. The people there are fine, relaxed. The site is gorgeous. It’s a post-apocalyptic event full of cruising cars with awesome scars, people walking around in amazing clothing, and there’s an unbeatable atmosphere in the air. It’s an experience from another world. 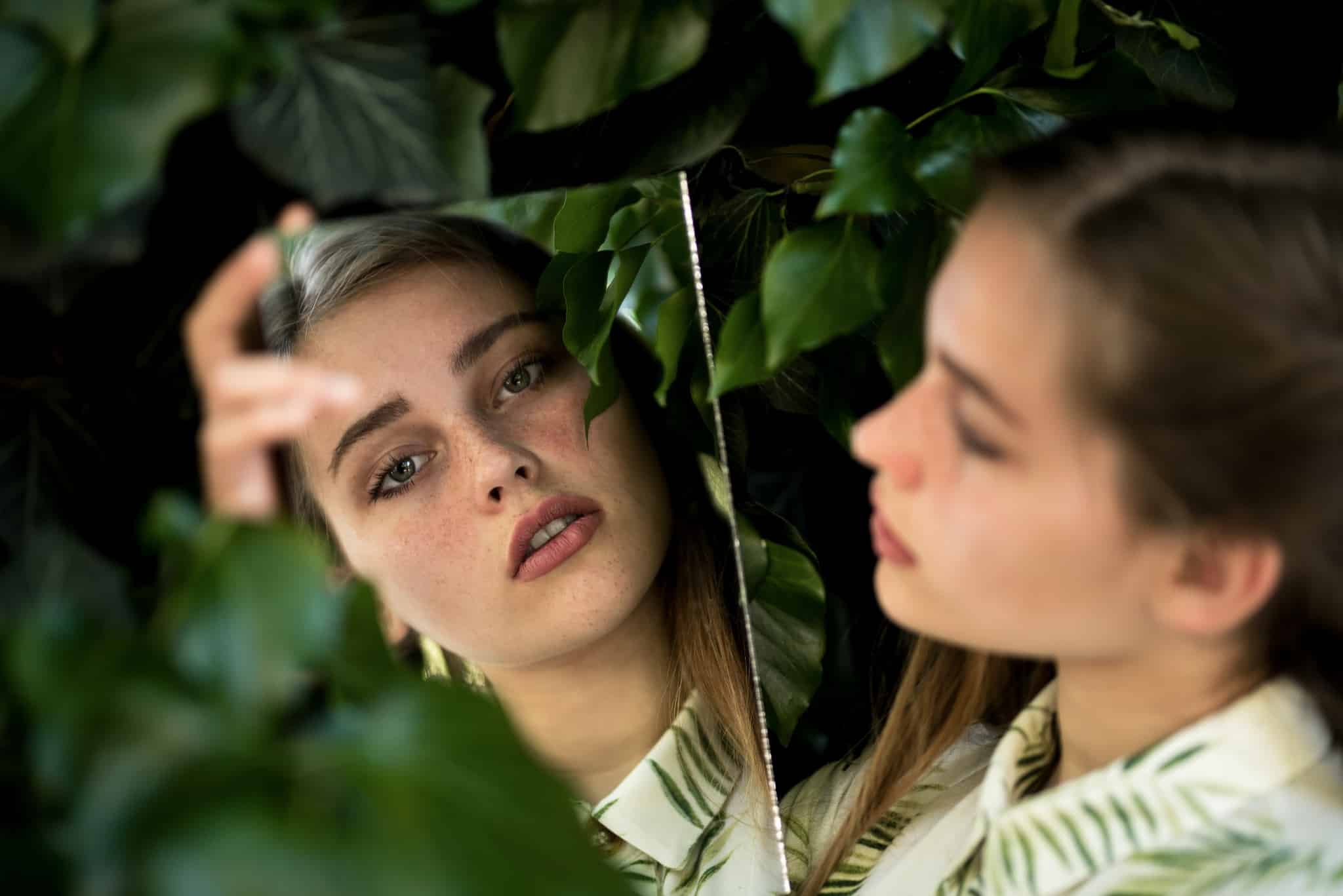 You also specialize in ordinary portraits, female nudes, and couple and family photography. How do you communicate with your subjects to keep them feeling relaxed?

Like I would with friends. Like with people. I’m communicative, I talk with them about photography, about life, about my cat, and about loving coffee. And I don’t even love coffee, but it’s a nice topic. People like coffee. So it’s mainly about keeping things from getting too quiet. That turns on the tension. I talk a lot when I’m taking my pictures. I tell the person I’m photographing what looks good on them, what’s pretty. I advise on poses and comment on light. I show them previews and debate on results. I respect my model’s opinions, and I never force them to do anything that’s uncomfortable for them. 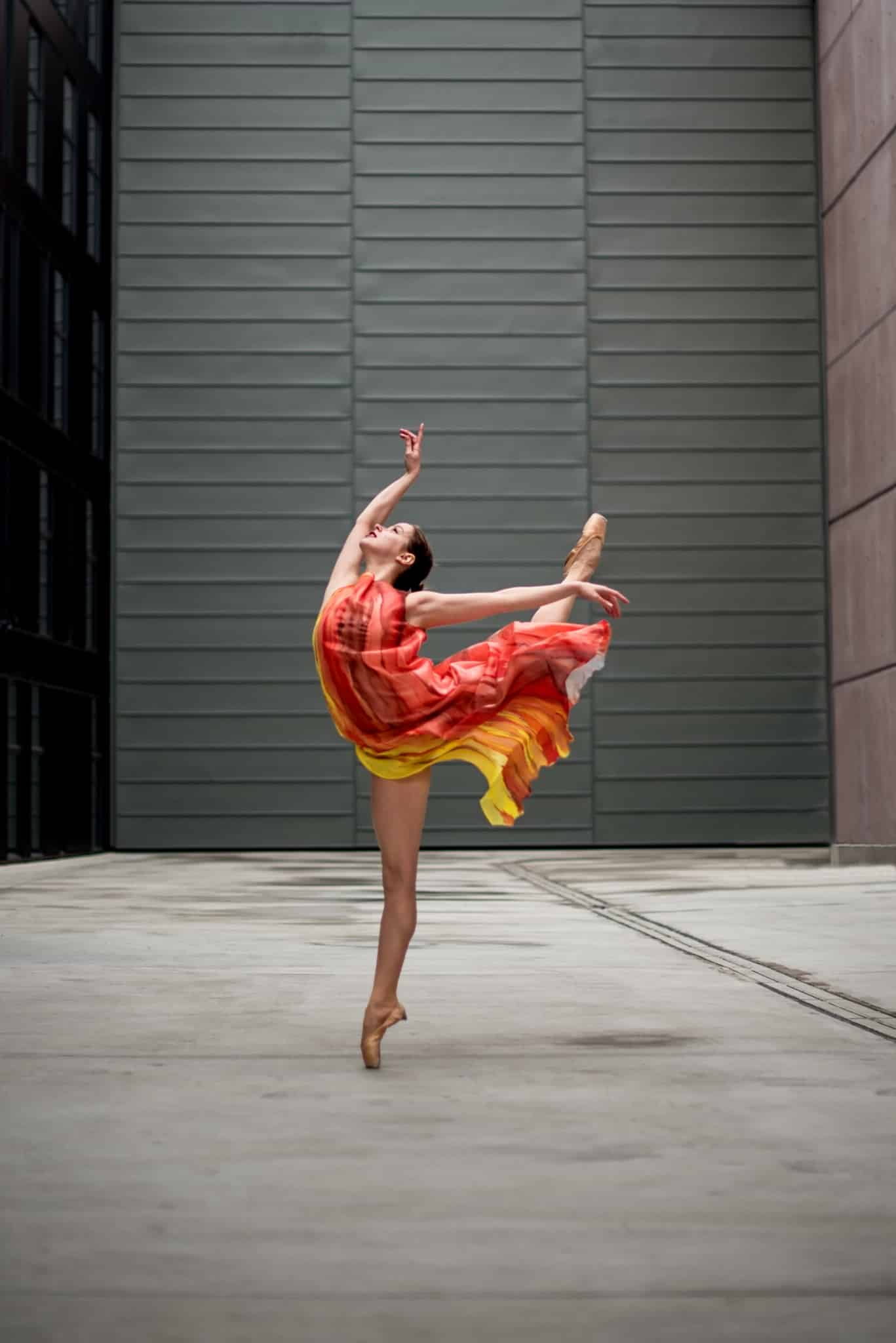 You try to include emotions in your photographs, and you state that it’s essential that they have a good atmosphere and spirit. What do you mean by that, and how do you try to achieve it?

It’s hard to describe. But emotions are in expressions. Slick and empty looks are weaker than smiles, rage, and tears. The soul is tied with ideas, with inspirations, with thoughts, with feelings. The soul is human, complex, and original. Like I say,  it’s hard to explain. I’d like for my photos to evoke feelings in people when they look at them. For them to speak and for people to find some message in these pictures that’s for them alone. 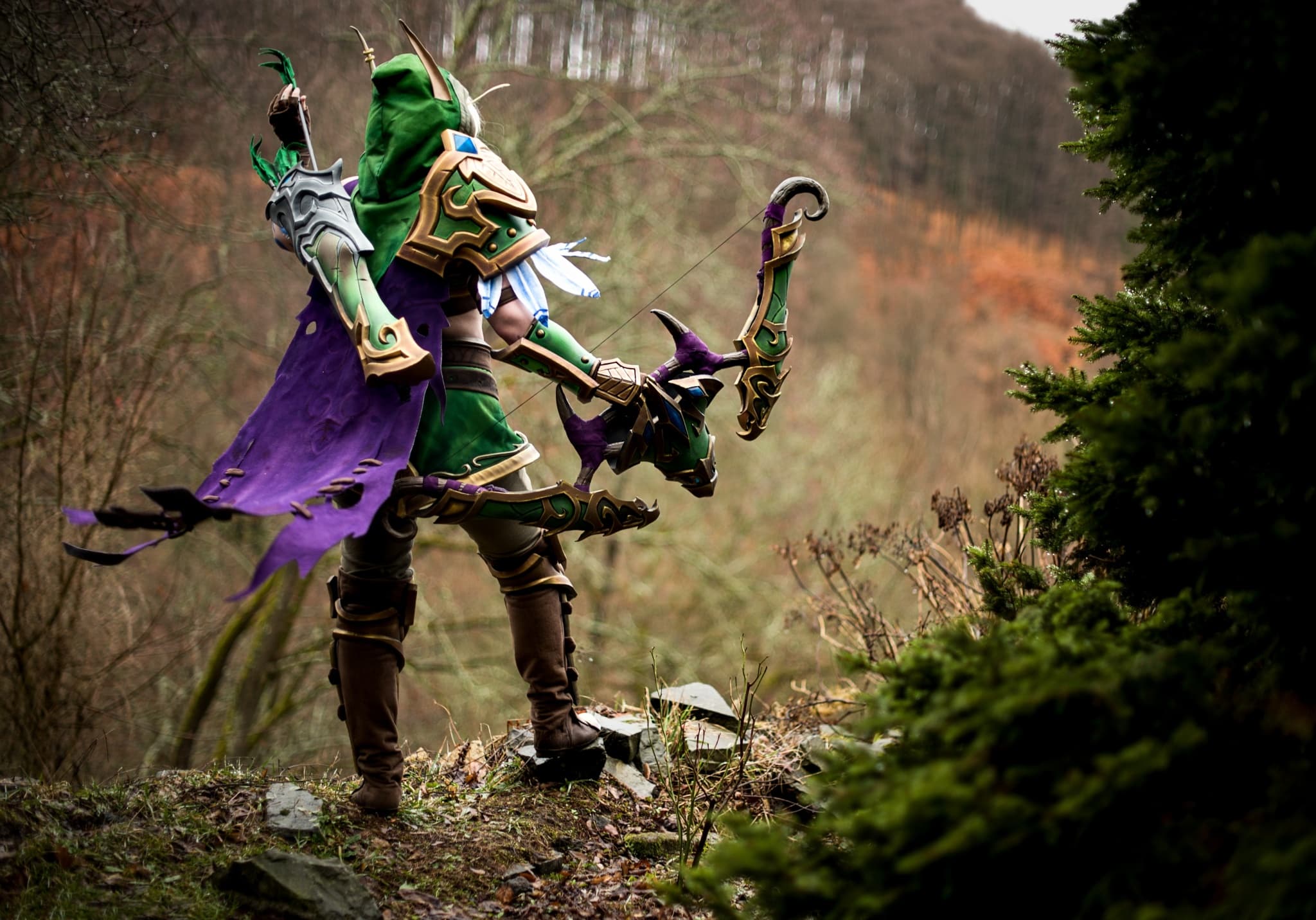 When I look at pictures (I’m a big fan of drawing and painting), I find something of my own in them that makes me feel a certain familiarity. Something that moves me. And that’s exactly what I’d like to bring into my photos. And so I drag my models around to interesting places, joke with them to get them laughing, and sometimes drown them in sad memories to make them cry.

I’d like for my photos to evoke feelings in people when they look at them. For them to speak and for people to find some message in these pictures that’s for them alone.

For now you’re not making your living from photography; what’s your focus in “civilian life?”

I own a bar in Prague. Sometimes I’ll take some money for a shoot, I guess more often now than before, but it’s still just something “extra.”

Does photography ever spill over into your daily life? (For example, have you been able to find friends, discover new places, learn to communicate better even outside of photography, learn something about life around you…)

It does. I’m meeting people. And to just the extent that fits me. I don’t like to be surrounded by large numbers of people, but I do like to occasionally meet them and spend a productive afternoon with them. It’s almost impossible to drag me out for coffee on a whim, I don’t see much point in it, and I really value my peace and freedom. But if photos come out if it, then there’s a point to it. I like to look for a point in things. It teaches me a sort of patience. 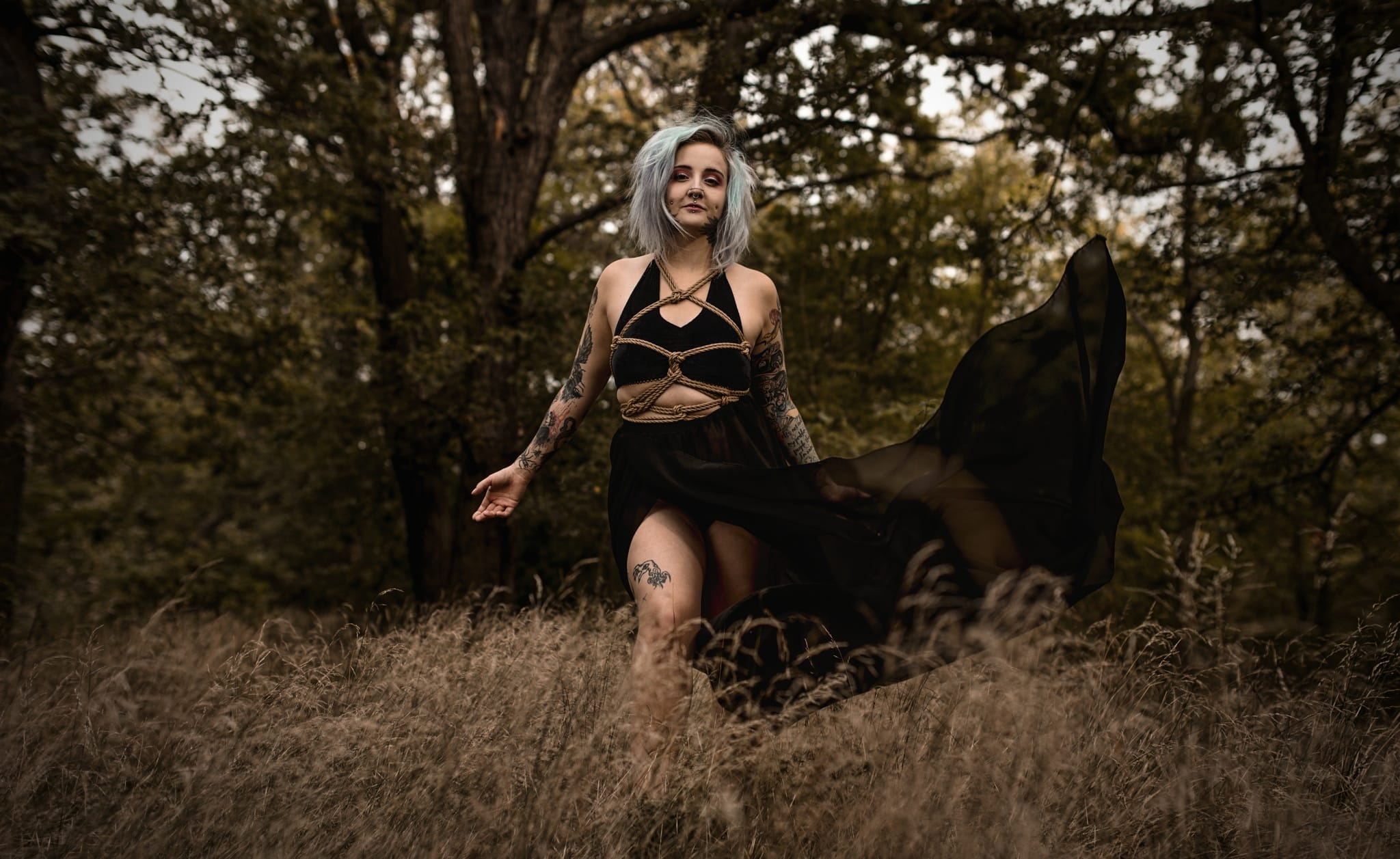 And it also helps with my mental health, which I have a little bit messed up. Photography has helped me to learn that I’m an artist. Even today I’m a bit afraid to call myself that, it sounds a little arrogant. But I’ve managed to make it to a position that I’d respect in other people, and so it forces me to respect myself. It’s given me something more in my life. A sort of a spice.

And one last question: is there any character from a movie, show, comic, anime, game, or book, or any real-world person that you’re carrying around in your head as a shoot you’d like to do?

There are a lot. Inspiration is everywhere. In every new game, in every new movie. But right now I’m waiting for my friend’s hair to grow out so that we can do a Joker shoot based on the latest movie. That’s something I’m really looking forward to.

TIP: Do you want to read more from Zdeňka Vrátná? Try her article How to Photograph a Cosplay: A Good Costume, Preparation, and Inspiration are the Foundation.