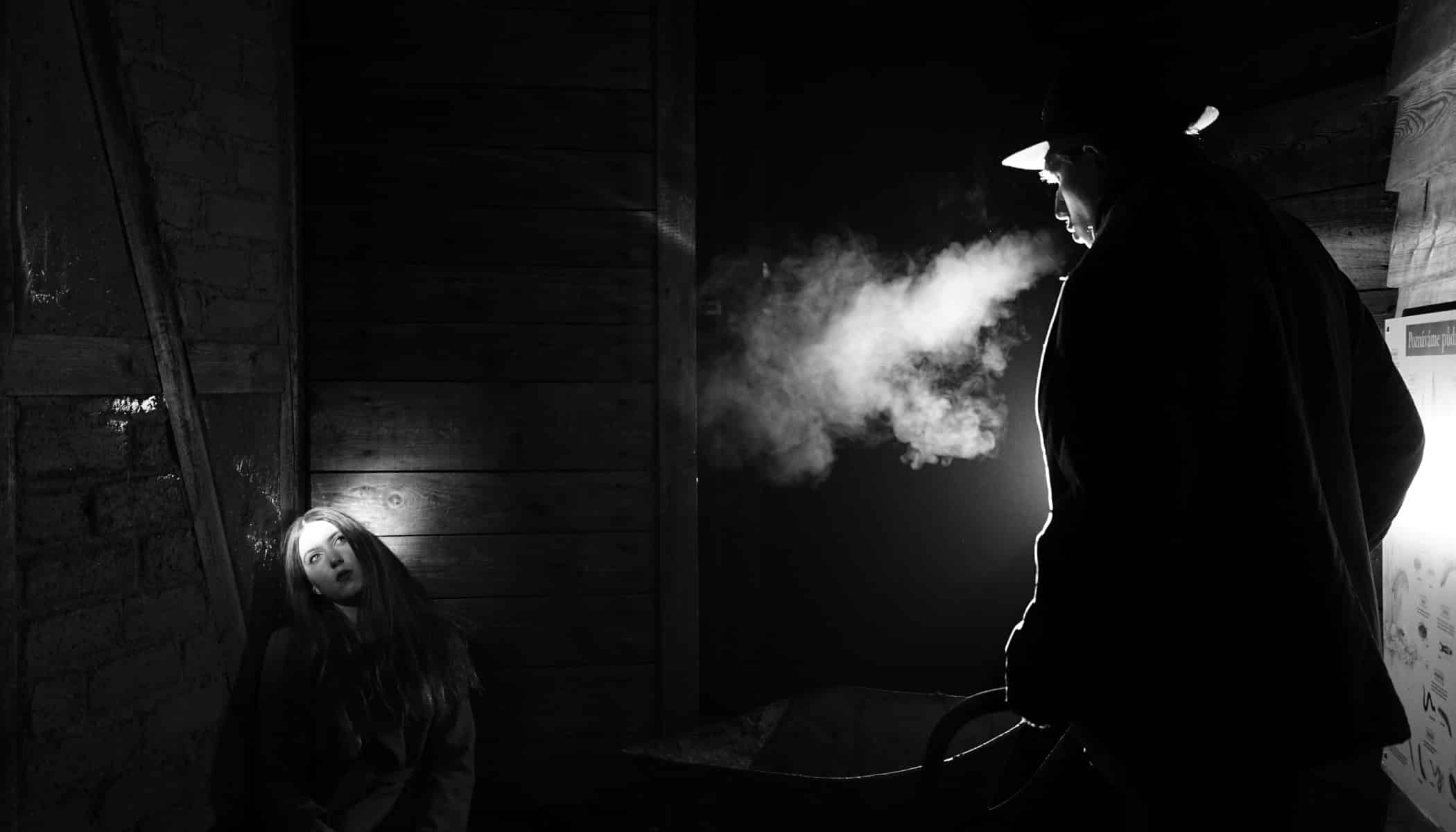 Shorter days have one definite advantage for photographers: an abundance of time for exterior photoshoots in the dark. Dark alleyways, brick walls lit by streetlamps, reflections of light on a river’s surface, or the elongated shadow of a black cat crossing your path. This type of atmosphere and abundance of time make for the perfect conditions for low key photography in the moody, cinematic style of Film Noir. Take a look at how it’s done…if you dare.

Have you seen the movies Double Indemnity, Sunset Boulevard, or The Killing? These are as classic Film Noir as they come. And it’s not just the visual style that makes this genre of film so attractive.

Film Noir is characterized by a thrilling and mysterious plot. The characters are similar to those from mystery novels, oftentimes dark and cynical. The story itself may reflect political, economic, and other social problems, which are a challenge to convey through photography. This is why we shouldn’t stick to only visual style during the photoshoot.

With the use of a photographic series, you can create a compelling story. You don’t have the storytelling methods of film at your disposal and you must make do with merely a photograph, but that’s what makes the entire process all the more exciting.

Take a look at our own interpretation of a story from a photography course for teenagers. Because we only had two hours, our story was limited to a simple plot line: a man (the gardener again!) is caught red handed in the greenhouse. 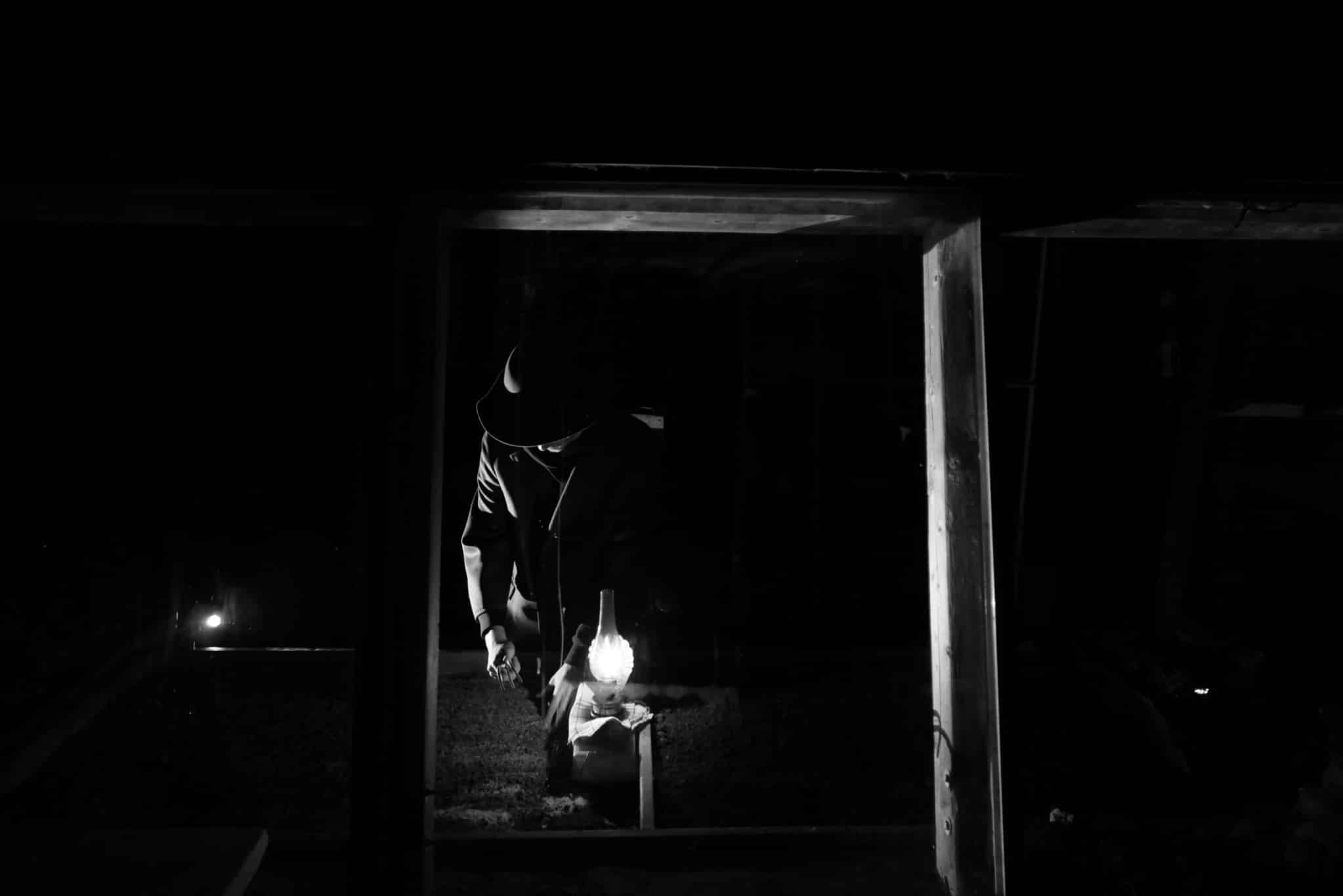 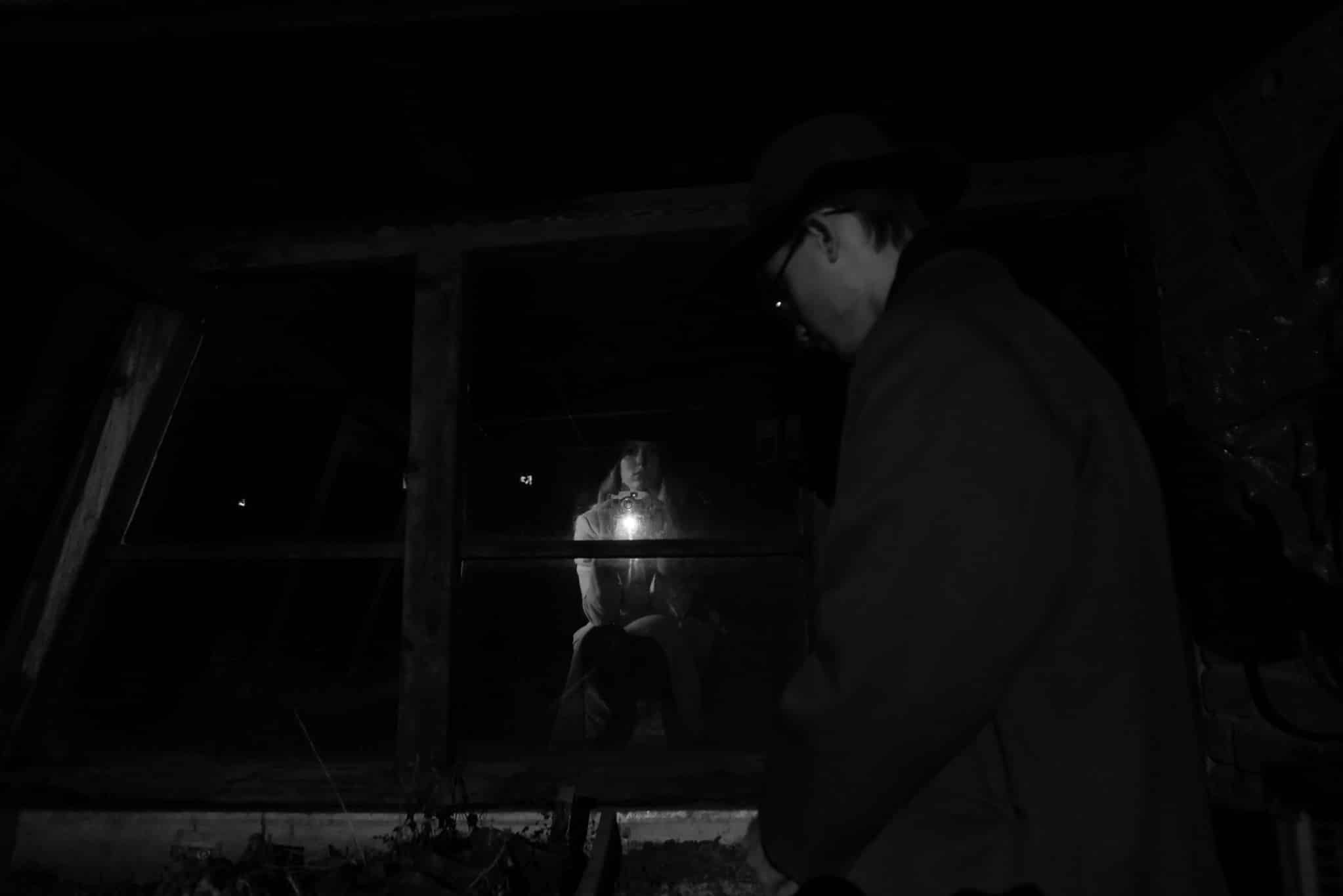 This evidence can’t see the light of day and so we’re left with no choice but to dispose of the witness. 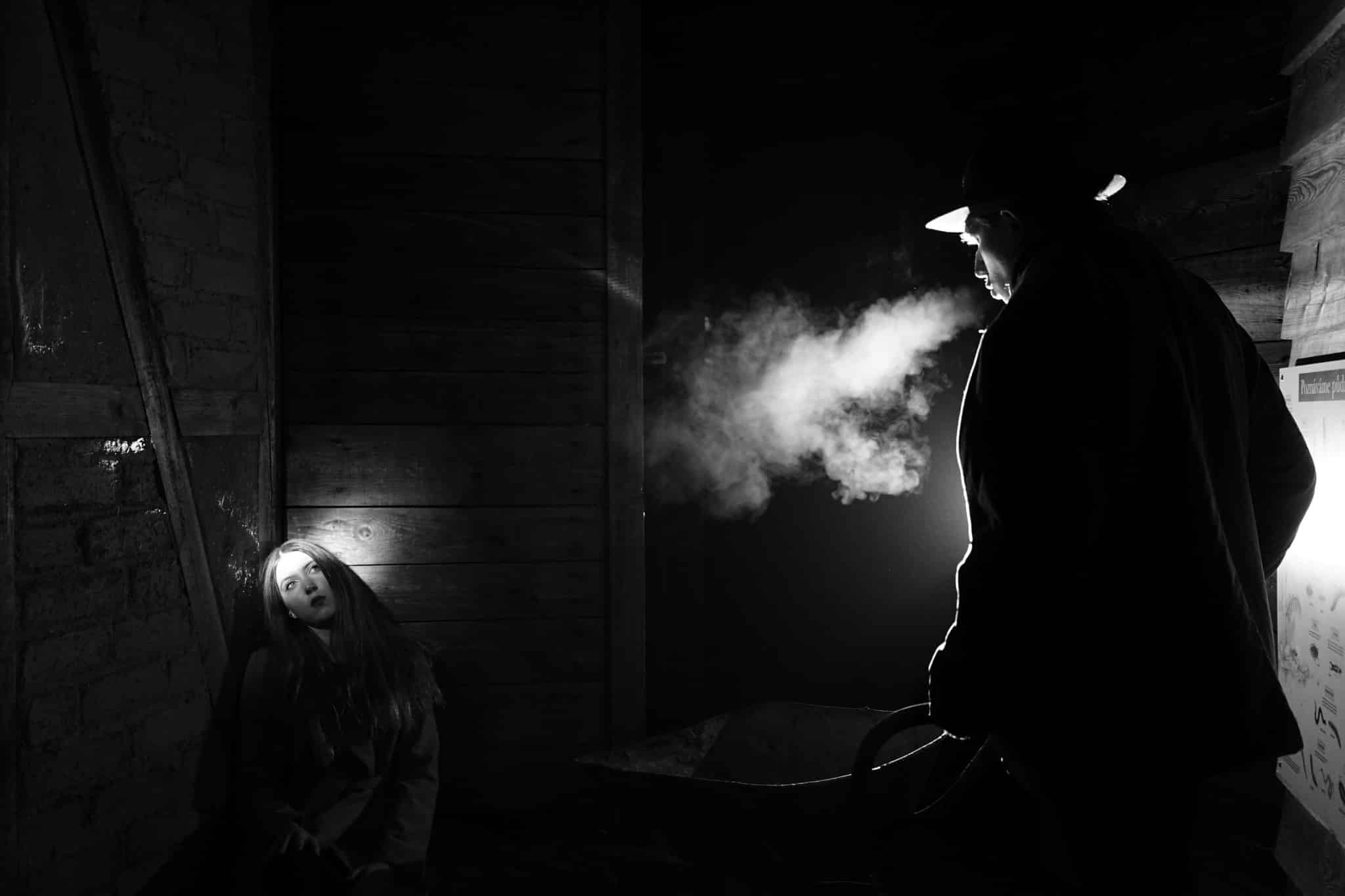 But as we know, no crime goes unpunished, and the gardener is caught by the police. 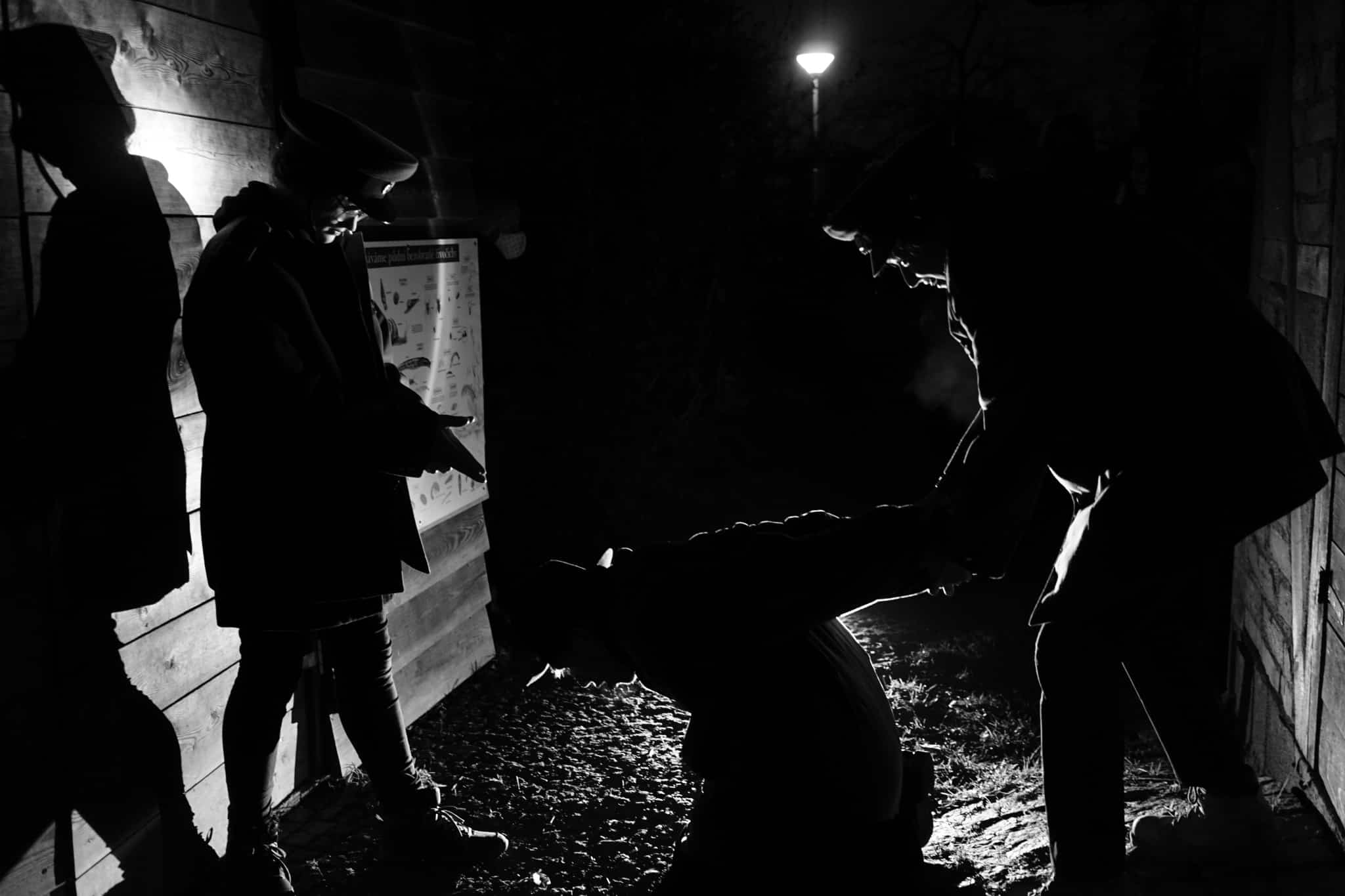 The story could have certainly been more complex, but with limited time, you can experiment with the basics of classic Film Noir as a springboard for other stories.

Just as a cinematographer needs assistants to film a movie, you’ll need assistants for your photoshoot to make your vision come to life. Since you are telling a story, prepare yourself to become a director, for the evening at least. Standing before you are actors who can’t see your camera display and need to be told and even shown where to stand and what to do.

Next, come the aforementioned actors and actresses. If you are working with professionals, you can draw inspiration from their facial expressions. With less experienced actors you’ll either be pleasantly surprised, or at the very least, have a good laugh while they try to form villainous, terrified, or frightening expressions.

If you don’t have a light mounted on a tripod or a spotlight on a stand, you’ll also need lighting technicians. Even if you do have these lighting options, it’s more convenient when someone adjusts the positioning or intensity of the lighting, saving you from running back and forth.

Don’t forget the costumes. Standard props for a crime drama are wide-brimmed hats, long trench coats like detective Colombo’s, dresses, umbrellas, guns, knives…let your imagination run wild. Make sure the shape of the clothing and props is unique, especially when using silhouettes where only the outlines are seen. Above all, the right clothing completes the story’s atmosphere.

Film Noir is characterized by black-and-white images and low key lighting, where there are overwhelming dark tones and high contrast between light and darkness. In traditional black-and-white photography, 3 types of lighting are used: key light, fill light, and backlight.

The key light reveals the contours of the subject, the fill light fills in shadows and thus lowers contrast, and the backlight emphasizes the background. You likely won’t use a fill light with Film Noir, though it always depends on what you want to be seen in your storytelling.

TIP: Read more about lighting a portrait using artificial lighting in the article, Portrait Lighting I: Keep the lighting quality, intensity, and color in mind.

On the other hand, rear spotlights are commonly used when shooting silhouettes. Choose a light source and place it behind your subject so that it illuminates the whole body. Set your exposure according to the light and a silhouette is born. You’ll appreciate a well-thought-out dress code when shooting silhouettes. In order for your subject to not turn into a black blob, I recommend asking your actors and actresses to move their arms away from their bodies and stand with their legs a bit apart. By doing so, you’ll create spaces between their body parts for light to pass through.

Thanks to a high level of contrast, the images are more dramatic: the human face is rougher and more aged, the human figures are isolated from their dark surroundings, and so on. Film Noir photography also calls for the creation of dramatic shadows, projected on the subjects’ face by window blinds or the vertical bars of a handrail. You can place the object in front of the light and by moving it closer and further away, you can adjust the width and contrast of its shape.

If you don’t require the shadow’s source to be in the photograph, you can even use the back of a chair, a colander, or other items you have around the house. While working with subjects in the Film Noir style, it’s also common to use reflections in the mirror, a glass table surface, or images through curved or frosted glass, or other objects used for distortion.

A Film Noir style photoshoot can definitely contribute to the creation of a good photo series, where every image in the series has its definitive place and meaning, without the need to repeat content. A clear style will help visually unify the series and the story will help establish continuity among the images. In addition, you’ll experiment with working with artificial lighting and setting exposure under relatively complex conditions of photography at night.

For the photoshoot, you’ll need to enlist the help of friends or family members. As long as you don’t blindly cling to your vision but rather give space for others’, their imagination may surprise you. It’s better to enjoy working together than live in fear that everything is not going according to plan. My final suggestion: Above all, don’t forget to have fun during the photoshoot!

From photographer to cinematographer: how to get the cinematic atmosphere in your photos

[Infographic] How Do You Change a Photo’s Colors?

It’s Not Black and White